Unmasking the Myths Behind the Fairness Doctrine: Executive Summary

Political activists and even certain U.S. senators have argued that the federal government should reinstitute the Fairness Doctrine, which would require broadcasters to air both sides of controversial issues. Opponents charge that Fairness Doctrine advocates are trying to reduce the impact of conservative talk radio. 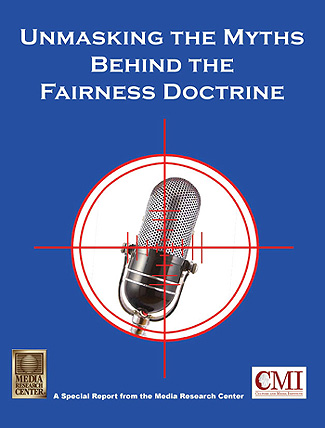 Rep. Mike Pence (R-Ind.) has introduced The Broadcaster Freedom Act (HR 2905), which would bar the Federal Communications Commission from reinstating the Fairness Doctrine.

The controversy touches on America's most fundamental civic values. Do we still cherish freedom of speech, or are some of us succumbing to the tyrannical impulse to stifle the speech of political adversaries? Do our leaders trust us to accept responsibility to govern ourselves, or do they wish to control which information we receive?

Are these arguments valid? They are myths.

2. The censorship argument. Are Americans hearing both sides of debates about controversial public policy issues, or are liberal voices being shut out?

3. The public interest argument. Would the Fairness Doctrine increase or reduce discussion about public policy issues? History says speech would be curtailed.

Efforts by liberal politicians to restore the Fairness Doctrine bring to mind the worst moment of Israel's King David. David was not satisfied with his many wives and concubines; he also had to have the beautiful Bathsheba, the only wife of one of his soldiers. American liberals already dominate four of the five most important news and information media, and they are determined to take over the fifth medium as well.

America has so many sources of news and information available that no federal regulation of broadcasting content can possibly be justified on the grounds of public interest. The Fairness Doctrine has an ugly history of political abuse directly intended to restrict the free exchange of ideas. As liberals propose and agitate for a resumption of the Fairness Doctrine, history may repeat itself.