Thanks to the release of Al Gore’s latest effort on global warming – this time in book and movie form – climate change is the hot topic in press rooms around the globe. It isn’t the first time.

The media have warned about impending climate doom four different times in the last 100 years. Only they can’t decide if mankind will die from warming or cooling.

As the noise from the controversy has increased, it has drowned out any debate. Journalists have taken advocacy positions, often ignoring climate change skeptics entirely. One CBS reporter even compared skeptics of manmade global warming to Holocaust deniers. 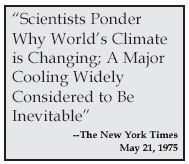 The Society of Environmental Journalists Spring 2006 SEJournal included a now-common media position, arguing against balance. But that sense of certainty ignores the industry’s history of hyping climate change – from cooling to warming, back to cooling and warming once again.

It found that many publications now claiming the world is on the brink of a global warming disaster said the same about an impending ice age – just 30 years ago. Several major ones, including The New York Times, Time magazine and Newsweek, have reported on three or even four different climate shifts since 1895.

“Global Cooling” Was Just as Realistic: Several publications warned in the 1970s that global cooling posed a major threat to the food supply. Now, remarkably, global warming is also considered a threat to the very same food supply.


Glaciers Are Growing or Shrinking: The media continue to point to glaciers as a sign of climate change, but they have used them as examples of both cooling and warming.


Global Warming History Ignored: The media treat global warming like it’s a new idea. In fact, British amateur meteorologist G. S. Callendar argued that mankind was responsible for heating up the planet with carbon dioxide emissions – in 1938. That was decades before scientists and journalists alerted the public about the threat of a new ice age.


New York Times the Worst: Longtime readers of the Times could easily recall the paper claiming “A Major Cooling Widely Considered to Be Inevitable,” along with its strong support of current global warming predictions. Older readers might well recall two other claims of a climate shift back to the 1800s – one an ice age and the other warming again. The Times has warned of four separate climate changes since 1895.