Those 101 videos had more than 438 million combined views as of May 20. That's enough video for 1.38 views for every man, woman and child in the United States. 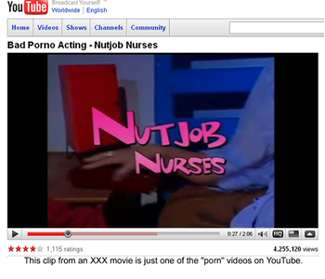 YouTube has been criticized for this type of content before. Demands from concerned parents' groups, backed by a content study from the Parents Television Council, forced the company to take steps to clean up the site in December 2008. In a post on the company's blog, it announced, 'we're tightening the standard for what is considered 'sexually suggestive,'' making it age-restricted and relegating it to light-traffic areas of the site.

YouTube claims that such adult material - and everything else - is kept away from young viewers. 'Children under 13 years are not permitted to access YouTube,' the company's 'Teen Safety' guidelines claim.

But that's not exactly true. YouTube has no way to prevent anyone 13 or younger from using the site. That is left entirely to parents and schools to monitor. YouTube has absolutely no way of knowing the age of the users who access most of the material. Unless Internet users login and volunteer that they are under age, YouTube has no ability to restrict the content.

And young people have used it - sometimes in horrible ways. A recent cyberbullying case involved a video called 'The Top 6 ways to Kill Piper.' According to the Associated Press, the video showed five girls describing ways to kill a sixth-grade classmate. 'The cartoon was made off school grounds by some of her daughter's classmates, girls aged 11 and 12,' wrote AP.

That was just one example of what the supposedly porn-free YouTube is really like. Dr. Janice Crouse of Concerned Women for America, who's book, 'Children at Risk: The Precarious State of Children's Well-Being in America," will be out from Transaction Publishers in the fall of 2009, cautions parents to be vigilant against companies like YouTube: 'While our children work on their school assignments and play games on the Internet, uninvited and unwelcome guests, like YouTube, barge in exposing them to pornographic images, hard-core pornography, crudity, coarse, vulgar and offensive language and behavior.'

Please note: It is nearly impossible to convey the true nature of the content in question without being nearly as obscene as the material itself. The Culture and Media Institue did its best to walk a line between informing and offending. Some of what follows is potentially offensive.

Introduced in December of 2008, the company explained its new 18 designation as, 'Videos with sexually suggestive (but not prohibited) content will be age-restricted, which means they'll be available only to viewers who are 18 or older.'

But 18 is not a difficult hurdle and is something the company has no way to verify. All that's needed is a valid e-mail address. Besides, if an adult has an account, a child using the same computer can log in if he knows the username and password, or will have account access from an ongoing session. Either way, there's a good chance for children to access the 18 content.

Once past the 18 test (such as it is), a viewer won't see nudity, (unless it is in unflagged material) but the viewer can see straight, gay or lesbian seductions and 'making out.' Many of these clips end with the message, 'YouTube guidelines don't allow us to show you any more. To see the rest, go to …' The viewer is now just a click away from the most graphic pornography on the Internet.

In YouTube's guidelines, it states, 'YouTube staff review flagged videos 24 hours a day, seven days a week to determine whether they violate our Community Guidelines. When they do, we remove them.' Repeat offenders may have their accounts terminated.

'Flaggots' would be viewers who flag objectionable content, and apparently enough of them found that particular channel that it had disappeared within 24 hours.

Take the 118 'Most Subscribed' YouTube channels for the month of May. Within those 5 pages of links, viewers can find 'heysexyhardcore,' whose description read:

I like making videos about naked women and stripping i want to someday be a playboy bunny hopefully.
I am totally straight but me and my gals have fun! …
I wanna give you an erection or make you nipples hard …
My channel is for girls who are into girls - or - guys who are into girls on girls.

Another is 'Divina Diana,' who lists her location as Milano, Italy and her occupation as 'Mistress.' The five videos on her site seem to be about domination and S&M.

One of the most subscribed channels for May 2009 was XxFootFreakxX. Its 149 subscribers and others viewed its videos more than 50,000 that month. What did they watch? Fetish videos of 'Foot Worship,' 'Foot Domination,' 'FOOT LICKING and SNIFFING,' and 'Foot Trampling.'

Within those 'Most Subscribed' were a spate of channels dedicated to home videos of girls dancing suggestively in front of the camera, with a particular focus on barely concealed buttocks thrust at the lens. 'Justme91,' 'Bossybaby7147' and 'TiannaTrillz2009' were typical. Some are just silly. At 'Myhula,' 9,103 people have watched 'me hula dancing in my underwear. i want to tighten up my abs and i just loooove to hula.'

And some are horrifying. 'Xw091,' who's age was listed as 16, features a 45-second home video of a girl's rear end gyrating to a hip hop song who's only lyric seems to be 'Bust that p***y open.'

There are also entire channels dedicated to 'sex education.' One is 'Good VibrationsTV.' Its description reads: 'Want to know more about sex toys? Need sex tips? Curious about what other people are thinking about when it comes to sex?'

Another one is 'SEX ED 102: ALL THE STUFF YOU NEVER LEARNED … BUT SHOULD HAVE.'

'The Planned Parenthood Channel' issuesd this invitation: 'Let's talk about sex! 'Speaking of Sex' is Planned Parenthood's award-winning podcast and videocast that takes a fun, yet informative, look at sexuality and its important role in our life and relationships.' Of course, Planned Parenthood, which has long disparaged abstinence-based sex education and promoted birth control for teens and abortion-on-demand, wasn't the place most parents would want their children learning about sex.

Then there's 'kicesie.' Her channel can be found under 'Gurus.' She's a young woman who claims to be providing 'Advanced Sex Ed for today's young adults (and older).' Some of her videos have been watched millions of times. She discusses various aspects of sex in graphic (though clinical) description, and invited viewers to 'share' their responses. What they shared was obscene and sexually explicit.

2. An Education in Obscenity

YouTube has 'Community Guidelines' banning 'hate speech against 'protected groups.' However, those groups don't include children, parents or people that believe in some standards of decency in public discourse.

Without even getting into 18 content, children can hear and read every imaginable obscenity and sexually explicit language, including descriptions of sex acts. According to the site's search engine, the word 'F***' appears in about 691,000 video titles. Many videos are laced with profanity and lewd, offensive language. Indeed, for some that seems to be the point. There's a video titled simply 'S***, F***, and B****!!!' Another, titled 'S***! F***!, is from a regular poster who compiled all the swears from his previous posts into a single, two-minute video.

YouTube describes itself as a 'Community' that welcomes responses to posted videos. YouTube has no obscenity rules and it shows. The level of discourse is filled with four-letter words and other obscenities.

On a video of the Jonas Brothers, among the comments by excited tween girls is this:

and so doas ur fav pop star ur famlly

u should suck ur daddy's too

Again, you don't have to watch a video to see things that are wildly inappropriate for children. Each video has a 'video capture' - a still thumbnail of its content. These are often just as bad as the videos themselves.

There are also video captures of barely covered breasts and buttocks, up close pictures of tongue-kissing, and a disturbing number of photos of animals mating.

4. 'Gay God' and other Eye-Openers

Some gay channel titles included: 'The Gay Christian Network,' 'Gay Familie Values,' 'Gay Pageant Videos,' 'HardGayTV,' and 'HOT GAY MEN, STUDS, AND MUSCLED HUNKS - NOTHING BUT.' 'The Ramblings of a Gay Wiccan' had 831 subscribers and over 16,000 channel views.

YouTube turned 4-years-old in February. In its short life the Internet video site has become a cultural phenomenon, and no wonder. It seems like if it was ever captured on film, video or digitally, viewers can find it on YouTube.

The company is owned by Google, so that Googling just about anything, returns a YouTube video among the first results.

Who's watching YouTube? The Web site said: 'Our user base is broad in age range, 18-55, evenly divided between males and females, and spanning all geographies. Fifty-one percent of our users go to YouTube weekly or more often, and 52 percent of 18-34 year-olds share videos often with friends and colleagues. With such a large and diverse user base, YouTube offers something for everyone.'

YouTube has content guidelines and safety policies, and the company says it tries to police the ever-growing universe of millions of videos. It relies on 'flagging' by users to alert it to obscene content, as well as algorithms that automatically separate some videos into an 18-years and over category, and that 'demote' what the company characterizes as 'sexually suggestive content and profanity,' from popular and 'featured' lists.

These measures are wholly inadequate, and do little to ensure that children are shielded from harmful content. In short, children should not be given unsupervised access to YouTube. A parent's surfing habits can also be a problem when parents leave computers on and stay logged in.

What's to be Done?

Pro-family groups have said Google/YouTube needs to step up and address these issues. In December of 2008, YouTube announced that it was 'tightening the standard for what is considered 'sexually suggestive,'' and instituting its 18 policy. It was also 'demoting' such suggestive content and profanity from its most popular areas.

And the company should be both proactive in its actions and far more responsive. Repeated attempts to get YouTube and Google officials to comment on CMI's findings failed. Instead, researchers were referred to YouTube's users' guidelines. If the company won't respond to a potentially damaging Special Report, what hope do concerned parents have?

Given its unresponsiveness, it is easy to conclude that YouTube is unapologetic about the kind of community it has become. Its guidelines are little more than lip service to standards of decency, and its safeguards are wholly inadequate to protect children.

It is essential that children be protected from the sleaze that populates YouTube. Just as a parent wouldn't let a young child children wander unchaperoned through the seedier districts of actual cities, they should make sure they give a wide berth to this 'community.'

Constant monitoring isn't always possible, of course. So Focus on the Family's Weiss had another suggestion for good parents:

As with other threats to children, parents must equip their children to navigate online dangers by buildings walls and building character. Parents will naturally protect their children when possible, but must also teach them media discernment guided by a spiritual hunger for the good, the true and the beautiful. The most effective counter to the distortions of the culture is to entice our children with the truth and beauty of human sexuality lived according to God's plan.'

Parents must also bear in mind that their home isn't the only place their children can encounter YouTube. Computers have become commonplace in classrooms and school and public libraries. Other parents also might have a more relaxed view of what their children can access.

The Culture and Media Institute recommended ways for both YouTube and parents to better cope with offensive online video.

What Parents Can Do: