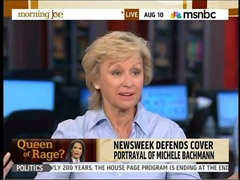 Tina Brown got in hot water for an unflattering August 15, 2010 Newsweek cover photo of Tea Party Republican Michele Bachmann but those who've followed the current Daily Beast and Newsweek editor's career, ever since she brought her version of tabloid journalism over from England to Vanity Fair in 1984, can tell you this is just par for the course. In fact that wasn't the first time the former editor of The New Yorker displayed her disgust for women of the right.

After a run of victories by female candidates in the 2010 GOP primaries, Brown on the June 10 edition of ABC's Good Morning America, called the wins: "a blow to feminism." However when it comes to liberal women like Michelle Obama, Brown sings a decidedly different tune. Of the current First Lady, Brown gushed: "One of the great surprises is what a force-multiplier Michelle Obama has turned out to be...You know as the world is talking about torture and the Bush administration, then we have Michelle with her vegetable garden. Talk about springtime in America!"

The following are just a few examples of Brown's liberal bias over the years:

"Some people look at this picture and think, you know, Michele Bachmann looks crazy," remarked Brown. "Some people look at it and think it's the next President of the United States. The fact that these two things are no longer mutually exclusive is what, I think, makes it pretty compelling."

"You know, there was one picture of her praying, which frankly we rejected because we thought that seemed somehow some kind of a commentary on her religiosity that maybe would be offensive," contended Brown, adding, "There was another picture of her sitting kind of sideways and I thought she looked extremely strange."

Pat Buchanan: "They [conservatives] say, 'This is the wrong way to go. We don't believe in it. We've committed against it. We can't do it, Mr. President, you're asking us to break our word and do something we think is not going to work, and we're not going to do it, sir.'"...

Co-host Mika Brzezinski: "So, I think the, what was the answer to my question that who the hostage taker is, Willie?"

Newsweek editor-in-chief Tina Brown: "I think they're the suicide bombers in all of this."

"The truth of the matter is that [Comedy Central's Daily Show host] Jon Stewart, at this point, is the only trusted branch of government. You know, I mean, in the end, Stewart and Colbert, really are like the Huntley and Brinkley of today, in the sense that people really, really trust them."

"The only trouble with this one is, it almost feels as if all these women winning are kind of a blow to feminism. Because, each one of them, really, most of them, are, you know, very much, uh, uh, you know, against so many of things that women have fought for such a long time....Women, too, can be wing nuts, is the point."

Limbaugh = 'Like the Bad Fairy at Sleeping Beauty's Christening'

"It's got to be that incredible inauguration of Obama....You started the year with this huge festival of hope and renewal and everything is going to be so different now, and then, like the bad fairy at Sleeping Beauty's christening, Rush Limbaugh utters the words, 'I hope you fail.''I hope he fails,' he said, and from that moment, the sort of the Pandora’s box opened, and the rest of the year has been just this big discord and toxic atmosphere in politics and partisan divide and people shouting at each other and the Tea Parties and death panels."

-Brown announcing her choice for the most important moment of 2009 on NBC's Today December 31, 2009 a few hours after Limbaugh went to the hospital with chest pains.

Barack Obama Got Best Press 'In History of Civilization'

Daily Beast's Tina Brown: 'No, he got the best press known to man. Let's face it."

Washington Post's Howard Kurtz: "In the history of civilization."

Brown: "In the history of civilization. Incredible."

"I have to ask myself at a certain point, you know, is Dick Cheney running for President?...In some ways, I kind of admire this, kind of, crazy jihad, this one man, kind of, hate-fest that he runs on cable shows. I mean, I guess he feels he has to defend what he did....But, you know, he's so damaging to the Republican Party every time he comes out....When he said on that show [CBS'sFace the Nation] that Rush Limbaugh rather than Colin Powell was the face of the party, it was like once again, that huge, fat crazy frame fills the screen and becomes the face of the party."

"Michelle is so authentic, and so real, and so today, and so, you know, J. Crew, and the whole price point thing and not designer clothes....With Michelle, you can almost feel those warm arms. You know, there's a kind of real red-blooded feel to her. But there's also — I mean she's almost, like, overtaking Oprah, I think, as the kind of inspirational 'it' girl at this point."

"One of the great surprises is what a force-multiplier Michelle Obama has turned out to be, because these two are working in such, sort of, flawless concert. You know as the world is talking about torture and the Bush administration, then we have Michelle with her vegetable garden. Talk about springtime in America!"

Fawning Over the 'Absurdly Debonair' Bill and 'Radiant' Hillary

Host Diane Sawyer: "I'm curious, Tina, as an editor, when you were reading through it, what was it, what was the single revelation, I guess, that most surprised you about her?"

"Close your eyes and enter this parallel universe, where the squalor and rancor of the trivia cops are temporarily shut out. Now see your President, tall and absurdly debonair, as he dances with a radiant blonde, his wife."..."His glamour is undersung. For those of us who had dismissed him as a garrulous, blow-dried, lip-biting occupant of the oval orifice [sic], this comes as a slight shock. Forget for a minute all the Beltway halitosis breathed upon his image. Forget the dog-in-the-manger, neo-puritanism of the op-ed tumbrel drivers, and see him instead as his guests do: a man in a dinner jacket with more heat than any star in the room (or, for that matter, at the multiplex)... His newly cropped, iron-filing hair and the intensity of his blue eyes project a kind of avid inclusiveness that encircles every jaded celebrity he passes. He is vividly in the present tense and dares you to join him there."