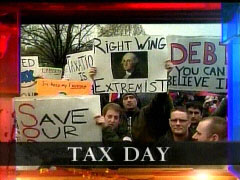 In April of 2009, network, cable and print outlets responded to the emergence of the tea party movement with condescension, outright hostility towards the participants and crude sexual innuendo-based ridicule. ABC's Dan Harris insisted they were "largely orchestrated by people fronting for corporate interests." CNN trashed the first rallies as "not really family viewing."

These insults were capped off by MSNBC bringing aboard actress Janeane Garofalo to scurrilously charge the rallies were only 'about hating a black man in the White House.' Here's a summary of the most-obnoxious and hostile coverage, illustrated with several videos, on ABC, CBS, NBC, CNN and MSNBC, as well as in USA Today, the New York Times and the Washington Post.

CNN analyst David Gergen: 'Republicans are pretty much in disarray.... They have not yet come up with a compelling alternative, one that has gained popular recognition. So-'
Anchor Anderson Cooper: 'Teabagging. They've got teabagging.'
Gergen: 'Well, they've got the teabagging....[But] Republicans have got a way — they still haven't found their voice, Anderson. They're still — this happens to a minority party after it's lost a couple of bad elections, but they're searching for their voice.'
Cooper: 'It's hard to talk when you're teabagging.'
— CNN's Anderson Cooper 360, April 14, 2009. 'Teabagging' is a vulgar slang term for a certain variety of oral sex. [Audio/video (1:01): Windows Media and MP3 audio ]

CNN's Susan Roesgen: 'You know, Kyra, this is a party for Obama bashers. I have to say that this is not entirely representative of everybody in America....[to protester] You're here with your two-year-old and you're already in debt. Why are you here today, sir?'
Man holding child on his shoulder: 'Because I hear a president say that he believed in what Lincoln stood for. Lincoln's primary thing was he believed that people had the right to liberty and they had the right-'
Roesgen, interrupting: 'Sir, what does this have to do with taxes?...Do you realize that you're eligible for a $400 credit?...Did you know that the state of Lincoln gets $50 billion out of these stimulus? That's $50 billion for this state, sir....We'll move on over here. I think you get the general tenor of this. It's anti-government, anti-CNN, since this is highly promoted by the right wing conservative network, Fox. And since I can't really hear much more and I think this is not really family viewing, I'll toss it back to you.'
— Live coverage of anti-tax protests during the 2pm ET hour of CNN Newsroom, April 15, 2009. [Audio/video (1:36): Windows Media and MP3 audio]

Announcing His Disdain in Advance

'There's been some grassroots conservatives who have organized so-called 'tea parties' around the company, country, hoping the historical reference will help galvanize Americans against the President's economic ideas. But I tell you, the idea hasn't really caught on. The RNC has jumped in. A few other talk radio hosts have jumped in, but it hasn't galvanized the party the way they would hope.'

Tea Parties Are Racist; Fox News Is for Idiots

"Let's be very honest about what this is about. It's not about bashing Democrats, it's not about taxes, they have no idea what the Boston tea party was about, they don't know their history at all. This is about hating a black man in the White House. This is racism straight up. That is nothing but a bunch of tea-bagging rednecks....Fox News loves to foment this anti-intellectualism because that's their bread and butter. If you have a cerebral electorate, Fox News goes down the toilet, you know, very, very fast....They have tackled that elusive...Klan with a 'K' demo."
— Actress/activist Janeane Garofalo on MSNBC's Countdown, April 16, 2009. [Audio/video (2:23): Windows Media and MP3 audio ]

ABC, CBS and NBC (more in the April 16 CyberAlert) downplayed the grassroots and non-partisan nature of the events, their significance and disagreeing with the participants' stated reasons for having them, characterizing the protests as a front for 'corporate interests' or a 'fistful of rightward leaning Web sites.'

ABC's Dan Harris: 'Cheered on by Fox News and talk radio, the hundreds of tea parties today were designed to protest the bailouts, the stimulus plan, and President Obama's budget....But critics on the left say this is not a real grassroots phenomenon at all, that it's actually largely orchestrated by people fronting for corporate interests....While the Boston Tea Party in 1773 was about taxation without representation, critics point out that today's protesters did get to vote - they just lost. What's more, polls show most Americans don't feel overtaxed.'

CBS's Dean Reynolds noted a tea party organizer 'insisted these events were non-partisan,' but, Reynolds maintained as if it were an embarrassment, 'a fistful of rightward leaning Web sites and commentators embraced the cause.' Reynolds stressed how 'it's important to keep in mind that fresh polling indicates there is not all that much passion about high taxes in the country at large right now. Gallup this week found 61 percent of Americans see their federal income taxes as fair.' (What percent surveyed even pay income taxes?)

NBC's Lee Cowan reported that 'organizers insist today's 'tea parties' were organic uprisings of like-minded taxpayers from both parties,' but 'some observers suggest not all of it was as home-grown as it may seem." Those 'some observers' turned out to be one observer, NBC News White House reporter Chuck Todd: 'A lot of the sentiment is about organizing anti-Obama rallies, getting conservatives excited about the conservative movement again.' Turning to public sentiment, Cowan maintained: 'Although today's organizers called this national day of protest a success, polls still show that a slim majority of Americans actually approve of the bailout plan. What they disagree with is where the money should go.'

David Shuster's crude and juvenile sexual innuendo: 'For most Americans, Wednesday, April 15th will be Tax Day. But in our fourth story tonight: It's going to be tea-bagging day for the right-wing and they're going nuts for it. Thousands of them whipped out the festivities early this past weekend, and while the parties are officially toothless, the tea-baggers are full-throated about their goals. They want to give President Obama a strong tongue-lashing and lick government spending - spending they did not oppose when they were under Presidents Bush and Reagan. They oppose Mr. Obama's tax rates - which will be lower for most of them - and they oppose the tax increases Mr. Obama is imposing on the rich, whose taxes will skyrocket to a rate about 10 percent less than it was under Reagan. That's tea-bagging in a nut shell.'

On the April 13 broadcast of the Rachel Maddow Show, both Maddow and liberal Air America's Anna Marie Cox attempted to match dim-wits with Shuster's 'tea-bagging' humor as the two used the term at least 51 times in a 13-minute segment, as detailed in a Business & Media Institute post.

America's major newspapers wrote either very little about and/or used cherry-picked data and poll results chosen to undermine the intent of the events.

USA Today, which touts itself as 'The Nation's Newspaper,' devoted just nine paragraphs on page 3A of the April 16 paper to the roughly 800 Tea Parties held nationwide yesterday. By contrast, on Tax Day morning, readers of the April 15 USA Today, some of whom were probably reading USA Today over breakfast, were greeted with a front page story that was six times longer and insisted: 'Most Americans OK with Big Government, at least for now.' (Details on NewsBusters.)

The New York Times finally noticed on April 16 - kind of - the nationwide 'tea party' protests against the bailouts, the stimulus plan, and President Obama's budget. Reporter Liz Robbins' story, 'Tax Day Is Met With Tea Parties' was the first Times news report to deal with any of the conservative anti-spending protests, and did so in a predictably snide manner in a relatively short article on Page 16. Online, she denigrated the efforts: 'All of these tax day parties seemed less about revolution and more about group therapy....People attending the rallies were dressed patriotically and held signs expressing their anger, but offering no solutions.' (Check TimesWatch for more on New York Times coverage.)

The Washington Post carried this headline in a text box at the top of Page One: 'Tax Burden Near Historic Low: The average family sent about 9 percent of its income to the IRS, with the middle-class faring especially well, according to federal data. A12.' (The D.C. tea party was noted at the bottom of the page, and readers were sent to B-1, the front of Metro.) But how do the Post's 'tax burden' claims stand up? Inside the paper, there was a chart credited to the 'nonpartisan' Congressional Budget Office, now controlled by the Democratic majority. It measured only the 'Effective individual income tax rate.' The Post thus measured less than half the actual total federal 'tax burden.' (For more on the Post's article, see NewsBusters.)

'If racism is not the whole of the Tea Party, it is in its heart, along with blind hatred, a total disinterest in the welfare of others, and a full-flowered, self-rationalizing refusal to accept the outcomes of elections, or the reality of democracy, or the narrowness of their minds and the equal narrowness of their public support. On Saturday, that support came from evolutionary regressives like Michele Bachmann and Jon Voight. On a daily basis that support comes from the racists and homophobes of radio and television: the Michael Savages and the Rush Limbaughs.'
— MSNBC's Keith Olbermann on Countdown, March 22, 2010.

'The angry faces at Tea Party rallies are eerily familiar. They resemble faces of protesters lining the street at the University of Alabama in 1956 as Autherine Lucy, the school's first black student, bravely tried to walk to class. Those same jeering faces could be seen gathered around the Arkansas National Guard troopers who blocked nine black children from entering Little Rock's Central High School in 1957. 'They moved closer and closer,' recalled Elizabeth Eckford, one of the Little Rock Nine. 'Somebody started yelling, 'Lynch her! Lynch her!''...Today's Tea Party adherents are George Wallace legacies....The mobs of yesteryear were on the wrong side of history. Tea Party supporters and their right-wing fellow travelers are on the wrong side now. It shows up in their faces.'
— The Washington Post's Colbert I. King in a March 27, 2010 column.

'There's nothing entertaining about watching goons hurl venomous slurs at congressmen like the civil rights hero John Lewis and the openly gay Barney Frank....How curious that a mob fond of likening President Obama to Hitler knows so little about history that it doesn't recognize its own small-scale mimicry of Kristallnacht.'
— New York Times columnist Frank Rich, March 28, 2010.

NBC's Kelly O'Donnell: 'There aren't a lot of African-American men at these events....Have you ever felt uncomfortable?'
Darryl Postell: 'No, no, these are my people, Americans.'
— Exchange included in O'Donnell's April 15, 2010 NBC Nightly News report on the Tea Party protest in Washington, D.C. [Audio/video (0:17): Windows Media | MP3 Audio] 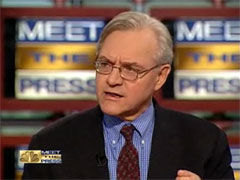 'Good for the NAACP. We need an honest conversation about the role of race and racism in the Tea Party. Thanks to a resolution passed this week at the venerable organization's national convention, we'll get it.'
— Former Washington Post and New York Times reporter E. J. Dionne in his July 15, 2010 Washington Post column.