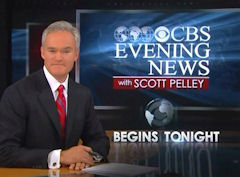 On Monday, June 6, 2011, Scott Pelley took over as anchor of the CBS Evening News, following the departure of Katie Couric. A review of the MRC's archive reveals Pelley will most likely continue the long tradition of liberal bias advanced by his anchor predecessors Couric, Dan Rather and Walter Cronkite.

From celebrating the likes of liberal heroes like Hillary Clinton, saying that she is of the rare few that can match Barack Obama's "global star power" to even offering praise of Iranian President Mahmoud Ahmadinejad, depicting him as a "genuinely humble" figure with "no fancy clothes, fancy cars" who was "absolutely incorruptible," Pelley's new stint as anchor promises to be one filled with biased platitudes for those on the left and harsh criticism of the right. Below are just a dozen examples of Pelley's slanted take over the years as a CBS correspondent for the Evening News and 60 Minutes.


On the January 2, 1996 edition of CBS Evening News, Pelley perhaps overdramatized the impact of the government shutdown when he opened his story this way: "In April, terrorists tried to kill them. Today politicians stopped their paychecks. In Oklahoma City's Social Security office, they're being ordered to work for nothing."


On the September 24, 2007 Early Show Pelley was very generous in his personal assessment of dictator Mahmoud Ahmadinejad as he hailed that the Iranian president as "incorruptible" and a "modest" and "friendly" guy as he told host Harry Smith: "The important thing, I think, Harry, to understand, he's described in the West as a madman, crazy, that's not the case. I found him to be as many politicians are, very engaging, very friendly, he's clearly not mad, he's sane. In fact, he's very wily I would tell you."
Pelley went on to praise: "He is genuinely religious, genuinely humble, there are no fancy clothes, fancy cars, he lives with his wife and his three children. They live in an apartment in Tehran. He is a very modest man and said to be absolutely incorruptible as well, he's a fascinating character." 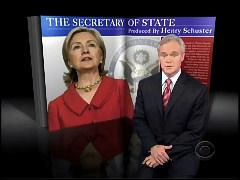 During a May 9, 2010 profile of Secretary of State Hillary Clinton on 60 Minutes, Pelley hailed that "she doesn't let anyone work harder' and "she's the only person in American politics with global star power close to" that held by Barack Obama, Pelley gushed: "A few Secretaries of State have been famous; none has been a first name celebrity like Hillary."

In a March 23, 2006 interview about his coverage of environmental issues Pelley was actually asked by CBSNews.com's senior political reporter Brian Montopoli why he refused to include skeptics of global warming and he replied: "If I do an interview with Elie Wiesel, am I required as a journalist to find a Holocaust denier?"

Montopoli went on to report that Pelley said: "His team tried hard to find a respected scientist who contradicted the prevailing opinion in the scientific community, but there was no one out there who fit that description" and then quoted Pelley arrogantly insisting: "This isn't about politics or pseudo-science or conspiracy theory blogs. This is about sound science." 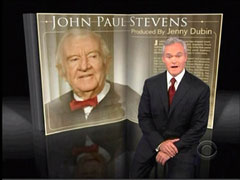 In a softball interview with retired liberal Supreme Court Justice John Paul Stevens on the November 28, 2010 edition of 60 Minutes, Pelley touted Stevens's opposition to the court ruling on the 2000 presidential election: "He thinks [Bush v. Gore] is one of the Court's greatest blunders....There were many people in this country who felt that the Supreme Court stole that election for President Bush." 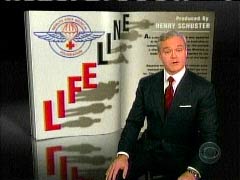 On the March 2, 2008, 60 Minutes, Pelley plunged into the presidential campaign with a story supporting the liberal issue agenda: "One of the decisive issues in the presidential campaign is likely to be health insurance. Texas and Ohio vote on Tuesday, and those states alone have nearly 7 million uninsured residents. Nationwide, 47 million have no health insurance. But that's just the start, because millions more are underinsured..."

Back on the January 8, 2003 60 Minutes II, over video of a long line of people in Marietta, Ohio, Pelley ominously intoned: "The lines we found looked like they'd been taken from the pages of the Great Depression. It's not just the unemployed, we found plenty of people working full time but still not able to earn enough to keep hunger out the house. If you think you have a good idea of who's hungry in America today, come join the line. You'd never guess who you'd meet there."

Pelley's emotions-over-facts style of reporting included this line: "Pre- schoolers come here with their parents and play in boxes as empty as the day's want ads." Pelley asked, "When you look at this line, what do you see?" And answered the question himself: "You know what I see? Some pretty average looking Americans."

In wake of Arizona passing a new immigration law, on the May 2, 2010 edition of 60 Minutes, Pelley fretted over illegal immigrants entering the United States by swimming across California's All-American Canal: "a national moat on our southern border, and hundreds of people have perished in its waters. It is a carnage that has gone mostly unnoticed because many of the victims are buried without their names."

Pelley also blamed the drownings, not on those crossing the border illegally, but on those operating the canal: "The water is 225 feet across, 20 feet deep, with almost no rescue lines or climb-out ladders, safety devices that you would find in some other canals....management is controlled by a regional authority called the Imperial Irrigation District....They've taken votes, commissioned studies, but done almost nothing." 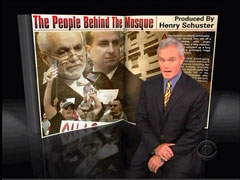 In a September 26, 2010 60 Minutes story that gave a glowing portrayal of the real estate developer and imam behind the Ground Zero mosque, Pelley also used the opportunity to smear opponents of the project: "...a national controversy with anger, passion, and more than a little misinformation. Opponents whipped up a fury, calling the project a grotesque mega-mosque tied to terrorism." 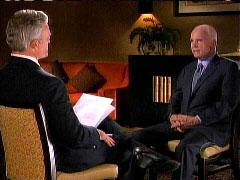 In a September 21, 2008 interview on 60 Minutes, Pelley hit then GOP presidential candidate John McCain on his running mate's qualifications, telling him "the criticism of Governor Palin is that she was a brilliant marketing choice for the campaign, but she's not well versed on the economy or foreign affairs," and demanded: "In your judgment, can you see her as President of the United States?" When McCain replied "Absolutely," Pelley's voice betrayed astonishment as he fired back: "As President of the United States?"

Pelley Covers Up For Bill Clinton

Back in 1993, the CBS Evening News didn't show viewers a single second of more than ten hours of taped interviews reporter Pelley conducted with Arkansas state troopers who alleged that a then Governor Bill Clinton used them to procure women for adulterous affairs. "We just felt, not to sound pompous in any way, but it didn't rise to the level of something that we wanted to put on the Evening News," Pelley later told political scientist Larry Sabato, in his book, co-authored with the Center for Media and Public Affairs' Robert Lichter, entitled: When Should the Watchdogs Bark?

Back on the March 6, 1998 edition of CBS Evening News Pelley was effusive in his praise of Bill Clinton's stewardship of the American economy, as seen in the following exchange with Dan Rather:

Dan Rather: "With the economy humming, CBS's White House correspondent Scott Pelley reports, President Clinton was singing his own praises, this time with the facts and figures to back him up."

Scott Pelley: "The recovery began before Mr. Clinton took office. The fact that it's run so long is credited to what some call the great odd couple - Mr. Clinton and Alan Greenspan, the Federal Reserve Chairman. Simply put, when Mr. Clinton made deficit reduction his top priority, Greenspan felt confident driving interest rates down. America did the rest. If the recovery continues to December, it will be the longest peacetime recovery in history."