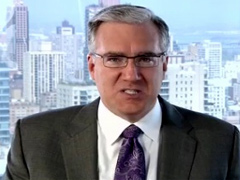 On June 20th, 2011, Keith Olbermann debuted on Current TV with a program almost identical to the Countdown show he hosted for eight years on MSNBC.  The former sportscaster was abruptly fired from the network on January 20, 2011, just months after being suspended for donating to liberal congressional candidates.

Even by the standards of liberal MSNBC, Olbermann's attacks on conservatives have been nothing short of vicious. In 2008, he frothed that George W. Bush was guilty of "murderous deceit."
An unhinged Olbermann, on January 18, 2010, excoriated then-Republican senatorial candidate Scott Brown as an "irresponsible, homophobic, racist, reactionary, ex-nude model, teabagging supporter of violence against women and against politicians with whom he disagrees."

While it seemed that Olbermann became more over-the-top with each passing year, the anchor demonstrated his contempt for all things Republican and conservative early on. He debuted on MSNBC in 1997, hosting The Big Show With Keith Olbermann. On August 19, 1998, he compared Ken Starr to Nazi propagandist Heinrich Himmler.

The bulk of Olbermann's bias can be found on Countdown, which first aired on March 31, 2003.  (The new version of Countdown With Keith Olbermann will be on a much smaller network, one founded by Al Gore). Here's the "worst of the worst" from the cable host:

"What would you do, sir, if terrorists were killing 45,000 people every year in this country? Well, the current health care system, the insurance companies, and those who support them are doing just that....Because they die individually of disease and not disaster, [radio host] Neal Boortz and those who ape him in office and out, approve their deaths, all 45,000 of them — a year — in America. Remind me again, who are the terrorists?"
— MSNBC's Keith Olbermann in a "Quick Comment" on Countdown With Keith Olbermann, January 5, 2010. [Audio/video (1:00): MP3 audio]

"What was the more likely cause of the Oklahoma City bombing: talk radio or Bill Clinton and Janet Reno's hands-on management of Waco, the Branch Davidian compound?...Obviously, the answer is talk radio. Specifically Rush Limbaugh's hate radio....Frankly, Rush, you have that blood on your hands now and you have had it for 15 years."

"[The Tea Party-backed Republicans are] a group of unqualified, unstable individuals who will do what they are told, in exchange for money and power, and march this nation as far backward as they can get, backward to Jim Crow, or backward to the breadlines of the '30s, or backward to hanging union organizers, or backward to the trusts and the robber barons...It is nothing short of an attempted use of democracy to end this democracy, to buy America wholesale and pave over the freedoms and the care we take of one another, which have combined to keep us the envy of the world.... If you sit there tomorrow, and the rest of this week, and you let this cataclysm unfold, you have enabled this. It is one thing to be attacked by those who would destroy America from without. It is a worse thing to be attacked by those who would destroy America from within."
— Olbermann in a 21-minute "Special Comment" on Countdown, October 27, 2010. [Audio/video (1:00): Windows Media | MP3 audio]

In Scott Brown, we have an irresponsible, homophobic, racist, reactionary, ex-nude model, teabagging supporter of violence against women and against politicians with whom he disagrees. In any other time in our history, this man would have been laughed off the stage as unqualified and a disaster in the making by the most conservative of conservatives.”
—Olbermann on Countdown, January 18, 2010, the night before Massachusetts’ special election. [Audio/video (0:25): Windows Media | MP3 audio]

“...the total mindless, morally bankrupt, knee-jerk, fascistic hatred — without which Michelle Malkin would just be a big mashed-up bag of meat with lipstick on it.”
— Olbermann talking about the conservative columnist and author on the October 13, 2009 Countdown. [Audio/video (0:16)]

Bush "Urinates" on the Constitution

“So, besides urinating on the Constitution and the rights and freedoms every American soldier has ever fought to win and protect, the Bush administration has now decided that when its victims have actually served their sentences, doled out under its own medieval, quote, ‘justice,’ unquote, system, it still might not choose to set them free, thereby giving that Constitution and our country a second pass on the way out.”
— Olbermann, August 7, 2008 Countdown. [Audio/video (0:32): Windows Media | MP3 audio]

Frothing Over Bush the "Facist"

“If you believe in the seamless mutuality of government and big business, come out and say it! There is a dictionary definition, one word that describes that toxic blend. You’re a fascist! Get them to print you a T-shirt with fascist on it!...You, sir, have no place in a government of the people, by the people, for the people. The lot of you are the symbolic descendants of the despotic middle managers of some banana republic to whom ‘freedom’ is an ironic brand name, a word you reach for when you want to get away with its opposite.”
— Olbermann addressing Bush in a “Special Comment” on Countdown, February 14, 2008. [Audio/video (0:39): Windows Media | MP3 audio]

Excoriating the "Murderous Deceit" of Bush

"As a final crash of self-indulgent nonsense, when the incontrovertible truth of your panoramic and murderous deceit has even begun to cost your political party seemingly perpetual congressional seats....When somebody asks you, sir, about the cooked books and faked threats you foisted on a sincere and frightened nation; when somebody asks you, sir, about your gallant, noble, self-abnegating sacrifice of your golf game so as to soothe the families of the war dead; this advice, Mr. Bush: Shut the hell up! Good night and good luck."
— Olbermann in a "Special Comment" on Countdown, May 14, 2008. [Audio/video (0:44): Windows Media | MP3 audio] 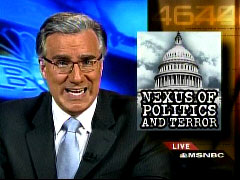 "Our third story in the Countdown, from the mindbending idea that four guys dressed as pizza delivery men were going to outgun all the soldiers at Fort Dix, to the not-too-thought-out plan to blow up JFK Airport by lighting a match 40 miles away....The so-called plot happens to be revealed the day before the second Democratic presidential debate and as the scandal continues to unfold over the firings of U.S. attorneys and their replacements by political hacks. The so-called plot is announced by the Bush-appointed U.S. attorney for Brooklyn, New York, and by the police chief of New York City, the father of a correspondent for Fox News Channel."
— Olbermann on his Countdown program June 4, 2007, outlining his claimed "Nexus of Politics and Terror," arguing the Bush administration manipulates news about terror plots for political advantage. [Audio/video (0:48): Windows Media | MP3 audio]

Bush 'Greatest Crime" of This Century

"Good evening. A President who lied us into a war and, in so doing, needlessly killed 3,584 of our family and friends and neighbors; a President whose administration initially tried to destroy the first man to nail that lie; a President whose henchmen then ruined the career of the intelligence asset that was his wife when intelligence assets were never more essential to the viability of the Republic; a President like that has tonight freed from the prospect of prison the only man ever to come to trial for one of the component felonies in what may be the greatest crime of this young century."
— Olbermann on Bush commuting Lewis Libby's prison sentence, MSNBC's Countdown, July 2, 2007. [Audio/video (0:40): Windows Media | MP3 audio]

"A past President, bullied and sandbagged by a monkey posing as a newscaster, finally lashed back....The nation’s marketplace of ideas is being poisoned by a propaganda company so blatant that Tokyo Rose would’ve quit....As with all the other nefariousness and slime of this, our worst presidency since James Buchanan, he [President Bush] is having it done for him, by proxy. Thus, the sandbag effort by Fox News Friday afternoon."
— Olbermann on MSNBC’s Countdown, September 25, 2007. [Audio/video (0:34): Windows Media | MP3 audio]

"The polite phrase for how so many of us were duped into supporting a war on the false premise that it had something to do with 9/11 is ‘lying by implication.' The impolite phrase is ‘impeachable offense.'...When those who dissent are told time and time again — as we will be, if not tonight by the President, then tomorrow by his portable public chorus — that he is preserving our freedom, but that if we use any of that freedom, we are somehow un-American; when we are scolded, that if we merely question, we have ‘forgotten the lessons of 9/11;' look into this empty space behind me and the bipartisanship upon which this administration also did not build, and tell me this: Who has left this hole in the ground? We have not forgotten, Mr. President. You have. May this country forgive you."
— Olbermann on September 11, 2006 ending his Countdown with a commentary delivered from the site of the World Trade Center. [Audio/video (1:06): Windows Media | MP3 audio]

"We now face what our ancestors faced at other times of exaggerated crisis and melodramatic fear-mongering: A government more dangerous to our liberty than is the enemy it claims to protect us from....We have never before codified the poisoning of habeas corpus, that wellspring of protection from which all essential liberties flow. You, sir, have now befouled that spring. You, sir, have now given us chaos and called it order. You, sir, have now imposed subjugation and called it freedom....These things you have done, Mr. Bush — they would constitute the beginning of the end of America."
— Olbermann in a "Special Comment" on the setting up of military trials for terrorists held at Guantanamo Bay, MSNBC’s Countdown, October 18, 2006. [Audio/video (0:46): Windows Media | MP3 audio]

Karl Rove Vs. War on Terror

"Karl Rove is a liability in the war on terror....In his ‘story guidance’ to Matthew Cooper of Time, Rove did more damage to your safety than the most thumb-sucking liberal or guard at Abu Ghraib. He destroyed an intelligence asset like Valerie Plame merely to deflect criticism of a politician. We have all the damned politicians, of every stripe, that we need. The best of them isn’t worth half a Valerie Plame."
— Olbermann in a July 11, 2005 posting to his "Bloggerman" page on MSNBC’s Web site.

"Can Ken Starr ignore the apparent breadth of the sympathetic response to the President’s speech? Facially, it finally dawned on me that the person Ken Starr has reminded me of facially all this time was Heinrich Himmler, including the glasses. If he now pursues the President of the United States, who, however flawed his apology was, came out and invoked God, family, his daughter, a political conspiracy and everything but the kitchen sink, would not there be some sort of comparison to a persecutor as opposed to a prosecutor for Mr. Starr?"
- Olbermann, host of MSNBC’s The Big Show, to Chicago Tribune Washington Bureau Chief James Warren, August 18, 1998. [Audio/video (0:32): Windows Media | MP3 audio]