Enola Gay Vet Indignant When Williams Asks If He Has "Remorse"Brian Williams: "You just told me the story about one photograph from the war that always kind of catches you, the Japanese soldier returning to his city that's been destroyed. Do you have remorse for what happened? How do you deal with that in your mind?"
Enola Gay navigator "Dutch" Van Kirk: "No, I do not have remorse! I pity the people who were there. I always think of it, Brian, as being, the dropping of the atom bomb was an act of war to end a war." 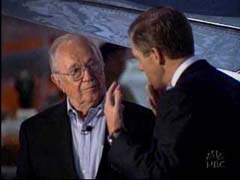 - Exchange as the two stood next to the plane at the Smithsonian's new National Air and Space annex near Dulles airport, in a segment on the 60th anniversary of the dropping of the first atomic bomb on Hiroshima, Japan, NBC Nightly News, August 5.

George Washington, Terrorist
"Andrea, what would it all matter if proven true? Someone brought up today the first several U.S. Presidents were certainly revolutionaries and might have been called 'terrorists' at the time by the British crown after all."
- Anchor Brian Williams asking reporter Andrea Mitchell about accusations that the new president-elect of Iran was a ringleader in the 1979 seizure of the U.S. embassy in Tehran and the holding of 52 American hostages for more than a year, NBC Nightly News, June 30, 2005. 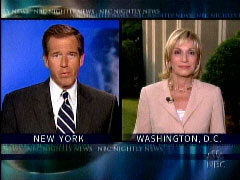 Brian Williams: Is it fair to call him [Jimmy Carter] the best former President in, at minimum, modern American history, and perhaps, well, I guess, the last 200 years?
Historian Marshall Frady: Which embraces all presidencies. I think absolutely.
Exchange on CNBCs The News with Brian Williams, October 11, 2002.


2000
Russert & Williams Easy on the Democrats
Williams Admits the Obvious

Williams Sees "Strident" and "Red Meat" Conservatives
"Howard, who are the Republicans who are not happy with the way this event looked tonight and similar groupings of these six, meaning, and its red meat for conservatives, the positions rather strident tonight: anti-gay, pro-Jesus, and anti-abortion and no gray matter in between?"
- Brian Williams, after a debate amongst Republican presidential candidates, to Newsweeks Howard Fineman, Jan. 6, 2000 MSNBCs The News with Brian Williams.