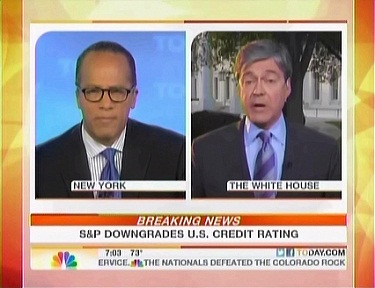 At the top of Saturday's NBC Today, CNBC's chief Washington correspondent John Harwood told co-host Lester Holt that the downgrade of U.S. debt provided President Obama with "a tangible consequence to point to for Republican brinksmanship on the debt and deficit reduction deal."

Harwood observed: "Mitch McConnell, the Republican leader, always said, 'We don't want co-ownership of the economy,'" and predicted, "You can expect the administration to say, 'You've got it now.'"

Later, Holt spoke to left-wing MSNBC host Lawrence O'Donnell about gridlock in Congress and fretted: "If they can't get their act together on the debt ceiling, can they focus now together on the economy and make the right changes?" O'Donnell lamented conservative calls for spending cuts: "They've eliminated any real options about what to do with the economy. Any sort of jobs program is spending and this is the anti-spending era in Washington....no one on my show has come up with any real possibility of what Washington can do on jobs."

Holt cited the latest New York Times poll showing that 82% of Americans disapprove of Congress and wondered: "Does that all link back to the debt ceiling debate, or does this go back even deeper?" O'Donnell proclaimed: "It's the ugliest thing we've seen Washington do in a very long time....people could tell that it was just purely partisan, that it wasn't substantive, and that their interests weren't being representative."

As this argument wore on and the Democrats started to make the case, 'Look, there should be some tax revenue in this mix, if we're doing deficit reduction.' Because, there always has been. That's the way Reagan did it. That's the way Republicans used to do it in the past. The pubic agreed with that. About 80% of the public said, 'Yes, there should be some tax revenues in here.' Especially at the high end of income earners, there could be more tax revenues coming out of that. And the Republicans absolutely shut it down. And so they didn't feel that the package represented their thinking. And it didn't.