Conservative Rep. Darrell Issa, a 'Nuisance' and a 'Pest'

As a sign of the pride Representative Darrell Issa takes in annoying the Obama administration, consider his account of a recent exchange with Rahm Emanuel, a former congressman and now the White House chief of staff. In describing the episode - a chance encounter outside the House gym - Mr. Issa smirked and raised his middle finger.

"That's the only thing Rahm did when he saw me," Mr. Issa, a California Republican, boasted in an interview in his House office. He waved the unfriendly digit in the air like a trophy before folding it into a nub (to mimic Mr. Emanuel, who lost part of his finger in a long-ago meat-cutting accident). More annoying? Mr. Emanuel, through a spokeswoman, said the incident did not occur.

Every Congress seems to produce a designated pest, adept at drawing attention to nuisance issues (and his nuisance self) while making trouble for the other party when it controls the White House. Representative Henry A. Waxman, Democrat of California, played that role during the Bush administration, while Representative Dan Burton, Republican of Indiana, did it before him in the Clinton years.

Waxman was actually called a "pest" in a December 21, 2004 signed editorial by Francis X. Clines, but that editorial was far more flattering to liberal Democrat Waxman than this news article is to the conservative Republican Issa. 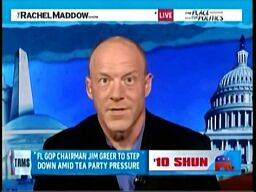 Now comes Mr. Issa, 57, who was charged with two long-ago auto thefts before eventually making a fortune selling car alarms; his signature product, the Viper, features his own deep voice ordering would-be burglars to "please step away from the car." Mr. Issa's voice has become inescapable, and not just among car thieves. He has been shouting forth on matters high-profile (the administration's response to the BP oil spill) and obscure (a possible conflict involving a member of the National Labor Relations Board).

Like Mr. Waxman and Mr. Burton before him, Mr. Issa (pronounced EYE-suh) is his party's ranking member on the House Oversight and Government Reform Committee, a perch that can become particularly visible for a member of the opposition party. He is, depending on the point of view, an invaluable gadfly or an insufferable grandstander - terms not always mutually exclusive on Capitol Hill.

Leibovich himself accused Issa of grandstanding: "Mr. Issa calls himself a Reagan Republican, but his true compass these days seems to be whatever gets under the administration's skin - and gets him on television."

He went on to pour the contents of Democratic opposition research over Issa's head:

The White House declined to comment for this article. But Democratic operatives have been circulating hefty opposition research files on him.

Born and reared in Cleveland, Mr. Issa, the grandson of Lebanese immigrants, describes himself as "a rotten young kid" - a period that apparently stretched well into his 20s. He pleaded guilty to a misdemeanor gun charge in 1972 (he was carrying an unlicensed pistol) and, with his brother William, was indicted on felony charges related to car thefts in 1972 and 1980. The charges were never pursued for lack of evidence, and Mr. Issa, who calls himself a victim of "guilt by association," blames his brother. (Reached at his home in Ohio, William Issa took full responsibility). He had a "colorful youth," Darrell Issa said of himself. "But if the newest thing they can point to is decades old, they're missing the whole point."