The broadcast TV networks have systematically skewed their coverage against Republicans and the Tea Party, a new study by the Media Research Center finds. MRC analysts reviewed the ABC, CBS and NBC evening newscasts from September 1 through October 25. Key findings:

■ Only conservative/Tea Party candidates cast as "extreme." Congressional Democrats and President Obama are facing voters' wrath because of their extreme agenda over the past two years: government-run health care; massive unsupportable spending; a proposed "cap-and-trade" tax on energy, higher income taxes, etc. But MRC analysts found 35 evening news stories which conveyed the Democratic spin point that conservative and Tea Party candidates are "extreme," "fringe," or "out of the mainstream," vs. ZERO stories conveying the charge that left-wing Democrats are "out of the mainstream."

■ Three times more "conservative" labels than "liberal" tags. Out of 62 ideological labels assigned by reporters, three-fourths (48, or 77%) were aimed at conservatives, vs. just 14 (23%) for liberals. Only Republicans faced extreme labels - both Joe Miller and Christine O'Donnell were tagged as "ultra-conservatives" - with no Democrat ever branded an "ultra-liberal." 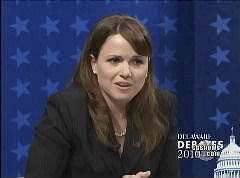 ■ Adopting Democrats' campaign agenda. The networks elevated contests meant to show Republicans in a poor light. While it's not on anyone's list of closest races, the networks devoted the most coverage to Delaware's Senate race (15 evening news stories), emphasizing O'Donnell's perceived gaffes. Next: the California Governor's race (11 stories), emphasizing allegations against GOP nominee Meg Whitman. Rounding out the networks' Top 5 were Senate races in Alaska, Nevada, and West Virginia, each the focus of four stories.

The Democrats' strategy to salvage the 2010 campaign was to distract voters from their record over the past two years and paint their opponents as wacky extremists. Win or lose, the Democrats got a lot of help from their friends in the supposedly objective "news" media.