Worst of the Week: Media Fulfilling Their Role in Democrats' 2010 Playbook

If Democrats are going to stem their losses, CBS's Jeff Greenfield opined on Monday's Evening News, they need to "convince the voters that this election is a choice" and "Republicans are just too extreme." Greenfield's probably right about this strategy being Democrats' best hope - and his fellow reporters are already hard at work fulfilling their role in painting Republicans as "extreme." 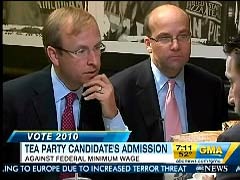 On Monday's Good Morning America, Jonathan Karl characterized as astonishing how "Alaska's Joe Miller talked about rolling back the power of the federal government further than Republicans have talked about for more than 70 years." Even more jaw-dropping to ABC: "Miller and other Tea Party candidates also favor eliminating the Department of Education." How is that more radical than Democrats' takeover of private-sector health care?

The next morning, NBC's Today dropped any pretense of neutrality, casting Republican gubernatorial nominee Carl Paladino as an "angry candidate" at the "heart of one of the nastiest races in New York history." Co-host Matt Lauer accused the Tea Party-backed Paladino of engaging in "nasty campaigning," then challenged: "How can you practice that gutter politics for a long period of time and then all of a sudden say, 'That's not me anymore?'"

But 24 hours later, Lauer showed no such contempt in an interview with DNC Chairman Tim Kaine. "Even with a high turnout, Republicans hold a 13-point lead over Democrats," Lauer fretted, "so how do Democrats chip away at those numbers in the next four weeks?" 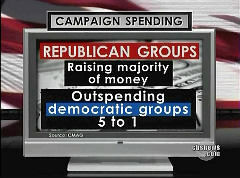 Even as journalists generously dispensed such in-kind contributions to liberals, on Tuesday's CBS Evening News Nancy Cordes saw a scandal in how outside groups favoring Republicans are raising five times more than groups favoring Democrats. "Outside groups," a horrified Cordes asserted without offering any evidence, "are often even less constrained by facts than the candidates they support." The next morning on CBS's The Early Show, co-host Harry Smith rued that this spending on behalf of Republicans "literally takes these elections out of the hands of the voters."

Talk about Bizarro World: It's a perpetually biased media that unfairly favors Democrats more than Republicans; whose facts can't be trusted; and who attempt to take elections "out of the hands of the voters." But journalists never see a scandal in their own bias. They just want to shut down everybody else.