Wisconsin Unions vs. The Tea Party: A Classic Double Standard 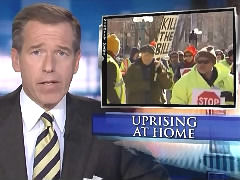 Loud protests by Wisconsin public employee unions against a budget reform proposal from new Governor Scott Walker have drawn considerable national network news attention since Thursday, the day Democratic state senators fled the state in a last-ditch gambit to prevent the bill from becoming law. A story-by-story analysis by the Media Research Center shows the Wisconsin protests are a perfect case study in the media's longstanding double standard favoring left-wing causes while demonstrating much more hostility to the Tea Party and conservative protests. 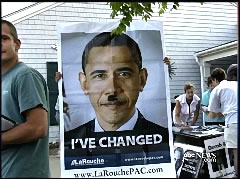 Last March, as thousands protested on Capitol Hill in the days before the passage of ObamaCare, CBS's Nancy Cordes slammed it as "a weekend filled with incivility," while World News anchor Diane Sawyer painted the Tea Party as a violent gang, with "protesters roaming Washington, some of them increasingly emotional, yelling slurs and epithets." In August 2009, ABC anchor Charles Gibson complained how "protesters brought pictures of President Obama with a Hitler-style mustache to a town hall meeting," failing to mention that the signs were produced by Lyndon LaRouche's wacky fringe movement, not the Tea Party or conservatives. 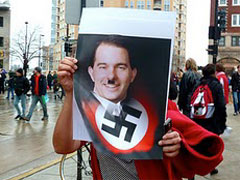 Over the past several days, the liberal demonstrations in Wisconsin (bolstered by the national Democratic Party and President Obama's Organizing for America group) have included signs just as inflammatory as the ones that bothered the networks during the health care debate, including several showing Governor Scott Walker as Adolph Hitler. Others have likened Walker to Soviet dictator Joseph Stalin ("Scott Stalin") and recently deposed Egyptian autocrat Hosni Mubarak ("Walker = Mubarak").

Another protest sign drew a cross-hairs over a picture of Governor Walker's head, with the caption "Don't Retreat, Reload; Repeal Walker" - an obvious parallel to a Facebook map posted by Sarah Palin last year, although that much-criticized graphic placed the target sights on maps of congressional districts, not any politician's face.

Yet none of these signs in the hands of liberal protesters have drawn the slightest complaint from network journalists. MRC analysts examined all 53 ABC, CBS and NBC morning and evening news stories, segments and anchor briefs on the Wisconsin protests from Thursday, February 17 (when they first drew major national coverage) through Monday, February 21. While eight of the 53 stories (15%) visually displayed one or more of the signs described above, none elicited a single remark from the network correspondents.

Instead, network journalists actually suggested the "Walker = Mubarak" theme of some of the more inflammatory signs. On Sunday's This Week, for example, ABC's Christiane Amanpour linked Wisconsin to the uprisings against oppressive dictatorships: "Populist frustration is boiling over this week, as we've said, not just in the Middle East, but in the middle of this country as well." So did NBC's Brian Williams on Friday's Nightly News: "From the Mideast to the American Midwest tonight, people are rising up. Citizens' uprisings are changing the world." NBC's on-screen caption: "The Uprising at Home."

"Today, we saw America's money trouble meet a reality, a human reality, as teachers, nurses, tens of thousands of state workers took to the streets in this country, protesting cuts by the governors, saying to these governors, a promise is a promise. One lawmaker looked out at the crowds gathered in the Wisconsin capital today said it's like Cairo moved to Madison."

The only time network journalists fretted about the Wisconsin protests getting out of hand was when their favorite bogeyman, the Tea Party, became involved - as ABC's Barbara Pinto did on Saturday's Good Morning America: "Today, those demonstrations are expected to get more intense and more polarizing - we're watching police officers arrive here this morning. And that is because the Tea Party is staging a counter-demonstration of its own today." 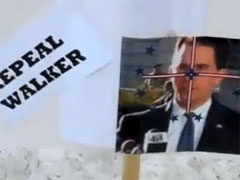 As of Monday night, none of the networks had shown the sign placing Walker's face in the crosshairs. But last March, when the graphic first appeared on Palin's Facebook page, those same networks howled almost instantly. CBS's Nancy Cordes, on the March 24, 2010 Evening News, was typical: "Democrats complain Sarah Palin is also using violent words and imagery. On Twitter, she urges conservatives: 'Don't retreat. Instead, reload.' And the Web site of her political action committee posts bull's-eyes on districts of vulnerable Democrats." 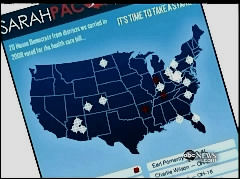 After Congresswoman Gabrielle Giffords was shot and severely wounded in January by a psychotic man unconnected to the Tea Party or any other political cause, the networks highlighted Palin's map in 24 stories in just the first six days. "That map Sarah Palin put up on Facebook last year, targeting Congresswoman Gifford's seat, made Gifford nervous, even then," NBC's Lee Cowan scolded on Today back on January 10.

Even the most timeworn chants seemed to outrage journalists when it came to the Tea Party. Back in March, CBS's Bob Schieffer was appalled  by, among other things, anti-ObamaCare protesters chanting "kill the bill." He lectured on the March 21, 2010 Face the Nation: "A year-long debate that's been rancorous and mean from the start turned even nastier yesterday. Demonstrators protesting the bill poured into the halls of Congress shouting 'kill the bill' and 'made in the USSR.'"

This weekend in Wisconsin, protesters also chanted "kill the bill" (CBS's The Early Show ran a clip on Friday) but on this Sunday's Face the Nation, Schieffer had no negative words for these protesters as he set up a discussion of the issue: "Thousands of demonstrators took to the streets again in Madison, Wisconsin as they marched to protest major cuts in state spending. The question is, will the protests spread to other states where similar proposals to cut spending are also being contemplated?"

When it comes to the Tea Party, network correspondents seem to enjoy playing "civility cop," emphasizing a few radical and inflammatory signs in ways that imply that the entire cause is extreme. Radical and inflammatory signs were easily found at the Wisconsin protests, but the networks uttered not one peep of disapproval - overwhelming evidence of a double standard that should embarrass any network journalist who still purports to be fair and balanced.