Twenty Years of Advocacy, Not Journalism, on Global Warming 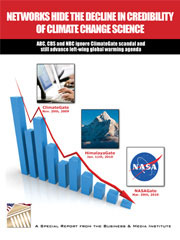 For more than two decades, the so-called mainstream media have preached the dangers of manmade global warming, insisting American businesses and consumers must make massive economic sacrifices to ward off a global climate catastrophe. Not even last November's exposure of e-mails from leading scientists on the alarmist side of the debate - showing them conniving to fudge or suppress data, discredit critics and distort the peer review process - has caused journalists to finally take a skeptical approach to radical environmentalists' doomsaying.

A new study  from the MRC's Business & Media Institute documents how ABC, CBS and NBC have been just as strident in their advocacy in the months following "ClimateGate" as they were in the 20 years that preceded the scandal. At the same time, a review of the Media Research Center's archives going back to the late 1980s shows just how strongly reporters have pushed the liberal line on global warming. Here are just some of the many examples:

■ "Global warming could mean economic upheaval. It could bring suffering. It could bring starvation....The causes of global warming are no mystery. The biggest culprit is carbon dioxide, or CO2, a bi-product when man burns fossil fuels to run cars or generate electricity....If we fail to act, there may be hell to pay in a hotter world....Global warming is not a fact, just a widely-held theory. The problem is, if man waits for proof, it may be too late."
- Host Don Harrison narrating CNN's primetime Climate In Crisis special, August 1, 1989.

■ "As the science editor at Time, I would freely admit that on this issue we have crossed the boundary from news reporting to advocacy."
- Time's Charles Alexander at a September 16, 1989 global warming conference at the Smithsonian Institute, as quoted in the October 5 Wall Street Journal.

■ "If the world is to head off the risk of global warming, with its danger of massive crop failure, or rising sea levels, or spreading starvation in the poorest countries, then America - the largest producer of the gases that cause global warming - is in the spotlight."
- ABC reporter Ned Potter on World News Tonight, April 7, 1992.

■ Karen Kerrigan, Small Business Survival Committee: "To say that the science is conclusive...is actually bunk."
Host Ted Koppel: "I was just going to make the observation that there are still some people who believe in the Flat Earth Society, too, but that doesn't mean they're right."
- Exchange on the December 9, 1997 Nightline.

■ "After decades of rancorous debate, only a handful of the most doctrinaire die-hards still dispute the idea that human activity is heating up the planet."
- Time's Michael Lemonick in a special edition for Earth Day, 2000.

■ "Despite the danger that climate change poses, the resources currently devoted to studying this problem - and combating it - are inconsequential compared with the trillions spent during the Cold War. Twenty years from now, we may wonder how we could have miscalculated which threat represented the greater peril."
- Time contributor Eugene Linden, September 4, 2000.

■ "Around the world, the anger runs as deep as the flood waters being blamed on the global warming the Kyoto treaty was supposed to fight. President Bush says he's putting American economic interests first in rejecting Kyoto, and in Britain, where they're having their wettest winter ever, they sadly agree....Others point to severe weather conditions around the planet - flooding for the second consecutive year in Mozambique, drought and famine in the Sudan - and they say the U.S. is substantially to blame."
- Mark Phillips on the March 29, 2001 CBS Evening News.

■ "Frankly, this notion that there isn't enough science, I mean that's right up there with does smoking cause lung cancer."
- Newsweek's Eleanor Clift discussing global warming on the McLaughlin Group, June 16, 2001.

■ "Glaciers are receding. Oceans are rising. Alaska is thawing. As officials from nearly 180 nations start to gather Monday in Bonn, Germany, to confront the vexing problem of global warming, the issue is no longer whether it is real, but what should be done about it."
- Opening of July 16, 2001 USA Today front-page article, "Six ways to combat global warming," by Traci Watson and Jonathan Weisman.

■ "ExxonMobil - I think this is a real group of bad guys, considering that they have funded all the anti-global-warming propaganda out there in the world. And Bush is just not going to go against guys like that. They are bad, bad guys, because of what they are doing in fighting the science of global warming."
- New York Times columnist Thomas Friedman in an interview published in Rolling Stone, October 17, 2002.

■ Peter Jennings: "We're going to take 'A Closer Look' tonight at why the temperature matters to all of us when it is affected by global warming. And just to be clear again, global warming is the gradual increase of the temperature of the Earth's lower atmosphere as a result of the increase in manmade gases since the industrial revolution...."
Reporter Bill Blakemore: "Severe climate change is accelerating....Polar bears are starving as the ice they hunt on vanishes, along with the seals they eat. Millions of birds are affected as spring comes too early and the fish they eat [have] gone to seek cooler waters."
- ABC's World News Tonight, November 8, 2004.

■ "The hurricane that struck Louisiana yesterday was nicknamed Katrina by the National Weather Service. Its real name is global warming....Unfortunately, very few people in America know the real name of Hurricane Katrina because the coal and oil industries have spent millions of dollars to keep the public in doubt about the issue....As the pace of climate change accelerates, many researchers fear we have already entered a period of irreversible runaway climate change."
- Former Washington Post and Boston Globe reporter Ross Gelbspan in an August 30, 2005 Boston Globe op-ed. 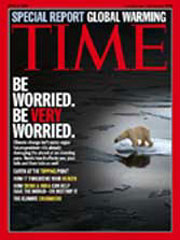 ■ "No one can say exactly what it looks like when a planet takes ill, but it probably looks a lot like Earth....Suddenly and unexpectedly, the crisis is upon us....Something has gone grievously wrong. That something is global warming."
- Time's Jeffrey Kluger in the magazine's April 3, 2006 global warming cover story: "Be Worried. Be Very Worried." 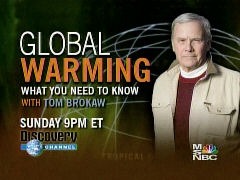 ■ Tom Brokaw: "About 10 percent of the Earth's surface is covered by ice, most of that in the polar regions. But if enough of that ice melts, the seas will rise dramatically and the results will be calamitous....If this worst-case scenario should occur, in the coming centuries New York could be abandoned, its famous landmarks lost to the sea."
Dr. James Hansen, Goddard Institute for Space Studies: "Boston, Philadelphia, Washington, Miami - they would all be under water."
- From Brokaw's two-hour Discovery Channel special, Global Warming: What You Need to Know, excerpt shown on the July 15, 2006 NBC Nightly News.

■ "So I'm running in the park on Saturday, in shorts, thinking this [warm weather] is great, but are we all gonna die? You know? I can't, I can't figure this out."
- Co-host Meredith Vieira talking about global warming on NBC's Today, January 8, 2007.

■ "It seems like we're reaching critical mass when it comes to this issue. And all the experts agree. Well, almost every expert. (There are a handful of scientists - many of them on the payroll of big oil companies - who wonder if global warming is a reality.) But my fervent hope is that Hollywood's embrace of Al Gore doesn't give people an excuse to condemn and mock the effort - and oppose taking steps that we as a society need to take to deal with the issue of climate change."
- Anchor Katie Couric writing about the Oscars on her CBSNews.com blog, "Couric & Co.," February 26, 2007.

■ "I really don't think climate change is a political issue.... Everyone agrees it's happening. If it's a political issue, it's whether the political will exists to address that change. We know we need to do something, and this is a way to heighten awareness."
- NBC Senior Vice President Dan Harrison quoted in the July 9, 2007 Washington Post defending NBC Universal's 75-hour multi-network coverage of Gore's "Live Earth." 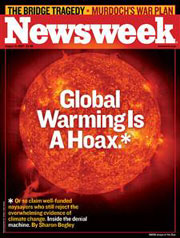 ■ "Global Warming is a Hoax* Or so claim well-funded naysayers who still reject the overwhelming evidence of climate change. Inside the denial machine."
- Cover of the August 13, 2007 Newsweek.

■ "Climate experts say whether hired guns or honest dissenters, deniers are confusing the issue and delaying solutions....The scientific debate is no longer over society's role in global warming. It is now a matter of degrees."
- NBC's Anne Thompson on the August 16, 2007 Nightly News.

■ "There are a few, I guess you could call them dead enders out there. There are a few that are still holding true to the notion that maybe this is some sort of natural cycle....It is a tiny fraction of a minority of scientists out there. And when you look at those scientists and trace their funding, frequently you are led to the fossil fuel industry. So, really, it's not a scientific debate anymore."
- CNN environment correspondent Miles O'Brien talking about scientists who dispute Al Gore's premise of a coming climate catastrophe, during CNN Newsroom, October 12, 2007. 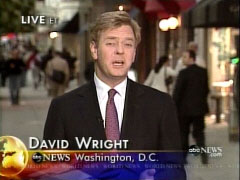 ■ "The verdict from the Nobel committee must be sweet vindication....[But] even the Nobel Prize is not going to be enough to silence the naysayers, some of whom still believe that man is not responsible for global warming."
- ABC's David Wright on Al Gore's winning of the Nobel Peace Prize, World News, October 12, 2007.

■ "The President of the U.S. can better shape the response to climate change than any other person in the world. Given the importance of this issue and the fact that you have emerged as its global spokesman, don't you have a moral obligation to put yourself forward for the presidency?"
- Time's Bryan Walsh in an interview with former Vice President Al Gore, who was runner-up in the magazine's December 31, 2007 "Person of the Year" edition.

■ "Not doing it [fighting global warming] will be catastrophic. We'll be eight degrees hotter in 10, not 10 but in 30 or 40 years, and basically none of the crops will grow. Most of the people will have died and the rest of us will be cannibals. Civilization will have broken down."
- CNN founder Ted Turner on PBS's Charlie Rose, April 1, 2008.

■ "Global warming naysayers are claiming that e-mails stolen from this research university show climate scientists discussing how to fudge results to promote the idea that humans are altering the planet....[But] the science is solid, according to a vast majority of researchers, with hotter temperatures, melting glaciers, and rising sea level providing the proof."
- ABC correspondent Clayton Sandell talking about the ClimateGate scandal on World News, December 6, 2009.

■ "Does this controversy change the science? A team of explorers will present findings on Arctic ice melt in Copenhagen, findings that have nothing to do with the e-mails....Beyond just the lack of summer sea ice, scientists also point to some other things happening around the planet. The increased melting of the Greenland and Antarctic ice sheets, earlier springs....All of those things are certain things that are happening, that they say it doesn't matter what's in those e-mails - the Earth is changing."
- NBC's Anne Thompson on NBC's Today, December 7, 2009.

■ Correspondent Wyatt Andrews: "To many Republicans, Climategate proves that global warming is a deception....But if that's true, it's a fraud adopted by most of the world's leading scientists, along with NASA, the U.N., the American Medical Association, and the National Academies of Science of 32 countries, including the United States. To most of them, ClimateGate is a sideshow compared to one overwhelming fact:"
Professor Michael Mann: "The last decade is the warmest decade on record."
- CBS Evening News, December 9, 2009.

Fire and Ice: Journalists Have Warned of Climate Change for 100 Years, but Can't Decide Weather We Face an Ice Age or Warming (from MRC's Business & Media Institute)

Media Reality Check: Peddling a "Cure" Worse than the Disease

Clamoring for Kyoto: The Networks' One-Sided Coverage of Global Warming