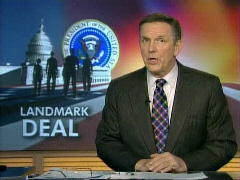 The evening newscasts (ABC's World News, CBS Evening News and NBC Nightly News) ran the most coverage (54 minutes, about 3 percent of airtime), while ABC's Good Morning America, CBS's Early Show and NBC's Today discussed immigration for less than 50 minutes, or about 0.6 percent of their airtime. Other key findings:

# Popping Champagne Corks. When it was announced, the networks greeted the deal as good news. "This is a giant step towards immigration reform," ABC's Martha Raddatz exulted on World News May 17. Moments later, reporter Kate Snow confided that "there is a sense in the immigrant community that this deal is almost too good to be true." 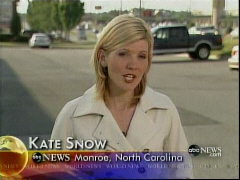 Over on CBS, reporter Sandra Hughes profiled an illegal immigrant working as a housekeeper. "Knowing she has a chance to become a legal citizen makes her happy to the point of tears," Hughes championed, but presented the proposed $5,000 penalty as an onerous burden. "It's a lot of money to ask for to process the paperwork to become legal," the maid dubbed "Susie" complained. 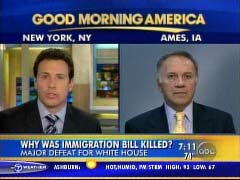 # Reform vs. Amnesty. On 47 occasions, reporters matter-of-factly used the positive adjective "reform" to describe the Senate bill, but only twice did reporters refer to it as "amnesty." When ABC's Chris Cuomo called it "amnesty" on the June 8 Good Morning America, he meant it to sound positive. "The [poll] numbers are in favor of giving some type of amnesty to these people. Isn't that the humane solution? Why are you so adamantly opposed to it?" Cuomo challenged GOP Rep. Tom Tancredo. 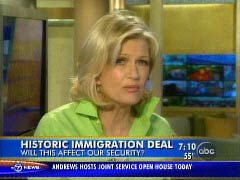 # Real Border Security? Most reports (75%) uncritically described the bill as one that "would toughen border security." One of the exceptions came May 18, when ABC's Diane Sawyer actually challenged co-sponsor Ted Kennedy: "All that is being done is adding 300 miles of fence to a 2,000 mile border....How is this gonna stop more illegal immigrants from coming in?" 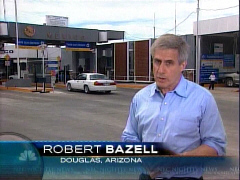 # Cost to Taxpayers. The costs of illegal immigration were mentioned just twice. In his May 22 commentary on CBS's Early Show, Lou Dobbs revealed how "Robert Rector of the Heritage Foundation estimates the net cost to our government and taxpayers could be more than $2.5 trillion over the next two decades." The only network news report on the subject came May 27, when NBC Nightly News reporter Robert Bazell used a small hospital in Arizona, as a case study: "The cost of treating non-citizens forced the Copper Queen [Hospital] to close its obstetrics unit....Nation-wide, undocumented immigrants cost the nation $6 billion a year for health care."

The networks' sympathies were easy to spot. On June 8, ABC's Charles Gibson suggested the bill's defeat "makes you wonder...if our political system is really equipped to attack and solve the big problems." The networks' paltry coverage makes one wonder if they are still equipped to adequately cover big debates like immigration, or if that job has already been yielded to energetic talk radio.