Back in September 2002, when Lauer and Couric were still a team, they rejected suggestions that their Today was a program friendly to liberals and unfriendly to conservatives. Lauer told interviewer Phil Donahue that complaints of bias reflected the viewers' prejudices, not his own conduct: "You will get a lot of e-mails that'll say, 'You were too light on that conservative.' You'll go and file down your e-mails, you'll find people who say, 'You were too hard on that conservative.' It's all in your point of view. It's much less, I think, our point of view than it is the point of view of the person watching the interview."

Couric's liberal bias has been well-documented, and a quick search of the Media Research Center's archives finds Lauer has been just as slanted as his former partner. Indeed, when it came to gun control, a topic where Lauer has been an outspoken advocate, the NBC host once complained to a newspaper interviewer that he wished he could be even less balanced: "I'd love to be more opinionated about guns," he told USA Weekend's Jeffrey Zaslow back in 2000. Zaslow wrote that if Lauer "could ask President Clinton just two questions: 'It wouldn't be about [Monica Lewinsky]. I'd ask, "What are you going to do about guns? Why not make this issue one of your legacies?'"

Lauer showed his unique disdain for guns when he weirdly complained in the days after September 11th about proposals to arm pilots to prevent future terrorism: "Let's take hijacking and potential crimes out of this for a second," he proposed to the head of the Airline Pilots Association. "Pilots are human beings. They get depressed, they get suicidal, they get angry. If they're armed, isn't that a formula for disaster?"

Memo to Matt: If there's a depressed, angry and suicidal pilot at the controls of a jet, a handgun would be the least of the passengers' worries.

On a host of other issues - from America's tactics in the War on Terror to the Lewinsky scandal, Lauer has presented the news from a reliably liberal perspective:

# Filling in as Today co-host back on Independence Day in 1994, Lauer wondered if the U.S. was really an awful country: "We hear the stories of discrimination in education and housing and jobs all the time. We hear the violence between races. Do you think it's possible that America is simply an inherently racist place?"

# Lauer has suggested that the American military are acting like terrorists. "Do you feel that we risk blurring the line between ourselves and the people we're supposed to be protecting U.S. citizens from?" he asked liberal Democrat Ted Kennedy on the May 13, 2004 Today. On the fifth anniversary of September 11th, he confronted President Bush in the Oval Office: "Are you at all concerned that at some point, even if you get results, there is a blurring the lines of, between ourselves and the people we're trying to protect us against?" 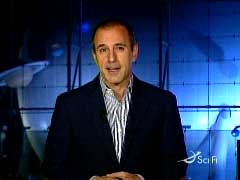 # In June of 2006, Lauer despaired that human beings were ruining planet Earth. "Us homo sapiens are turning out to be as destructive a force as any asteroid," Lauer claimed in a two-hour special he narrated on the Sci-Fi Channel. "Our assault on nature is killing off the very things we depend on for our own lives." A few months later on Today, he appealed to Al Gore's sense of environmental activism in urging Gore to run for the White House: "From your point of view, if you were to run for President you could take this issue [of global warming] to the next level....You could be in a position to save the planet!"

# Bill Clinton was presented in high esteem. During Clinton's final year in office, Lauer hopefully asked historian Doris Kearns Goodwin: "Maybe we go back to a time where we give less scrutiny to a President's personal life, back to the Kennedy and Eisenhower and Roosevelt years?" He wished: "I hope that the American people would find it more exciting to talk about health care and Social Security and not about these personal peccadilloes."

Five years later, Lauer summed up Clinton's biography for a Discovery Channel special "Greatest American." According to Lauer, "despite the scandals and investigations, Bill Clinton was an incredibly popular President who connected with the American people....Under Clinton the economy boomed - deficits turned into surplus - and more than 22 million jobs were created. Along with the character flaws and the subpoenas came peace and prosperity."

# The investigation into Clinton's perjury and obstruction of justice struck Lauer as offensive. Right after the House voted to impeach Clinton in December 1998, Lauer asked disgraced ex-House Speaker Jim Wright: "When you resigned nine years ago, you had been battered by the right. You called for an end to what you called 'mindless cannibalism.' Nine years later we're hearing terms like that again and others swirling around the impeachment of Bill Clinton. Have we learned nothing in nine years?"

Lauer soon followed up: "During [Senator Joe] McCarthy's sort of communist witch hunt, the real turning point was when one person being grilled by the Senator said 'do you have no decency.' Do you see anybody with the credibility in Washington right now to ask that same question?"

# Visiting Russia in February 2004, Lauer seemed to miss the days of communist dicatatorship: "Russia's rush to capitalism left the vast majority scrambling to survive. For many, life is worse than it was in Soviet times."

But right after the Democratic convention, Lauer was thrilled by Al Gore's public display of affection for Tipper Gore: "You really planted one on Mrs. Gore at the beginning of your speech there. What were you thinking?....Way to go!" And during the long Florida recount, Lauer invited Gore aide Bill Daley to criticize a deadline set by Florida's Secretary of State Katherine Harris: "Do you think, and to use a rather crude term, that her decision does not pass the smell test?" 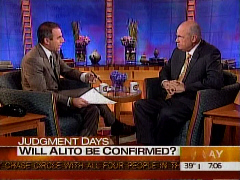 # As Judge Samuel Alito faced Senate confirmation hearings a year ago, Lauer cast the judge as an extremist. "Let's face it, he is an ultra-conservative and his track record on the bench is that he goes to the right on key issues," Lauer told former Republican Senator Fred Thompson.

# But Lauer's bias has not gone unchallenged. In November 2004, he proposed this comparison to Lynne Cheney, who'd just written a book about America's Revolutionary War: "Let me talk about this idea that a rag-tag group - not well-fed, not well-clothed, completely under-equipped as compared to this great British army and the Hessians - could accomplish this. And let me ask you to think about what is going on in Iraq today, where the insurgents - not well equipped, smaller in numbers - the greatest army in the world is their opposition. What's the lesson here?" Mrs. Cheney instantly shot back: "Well, the difference of course is who's fighting on the side of freedom."

Similarly, when Lauer visited Baghdad the following August, he invited soldiers to complain about poor morale, only to have them all say they were enthusiastic about their mission. Lauer finally told one officer: "Don't get me wrong here, I think you are probably telling me the truth but a lot of people at home are wondering how that could be possible with the conditions you're facing and with the attacks you're facing. What would you say to those people who are doubtful that morale can be that high?" U.S. Army Captain Sherman Powell hit Lauer with this zinger: "Sir, if I got my news from the newspapers also, I'd be pretty depressed as well."

This morning, Lauer noted that he had "many more years" left on his contract with Today. Regrettably, that will probably mean many more liberal outbursts will greet viewers in the years to come. - Rich Noyes