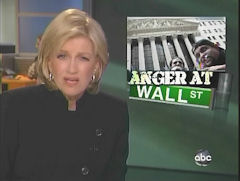 The Occupy Wall Street protestors have received overwhelmingly positive coverage from the Big Three (ABC, CBS, NBC) news networks, as they used their airtime to publicize and promote the aggressively leftist movement. In just the first eleven days of October, ABC, CBS and NBC flooded their morning and evening newscasts with a whopping 33 full stories or interview segments on the protesters. This was a far cry from the greeting the Tea Party received from the Big Three as that conservative protest movement was initially ignored (only 13 total stories in all of 2009) and then reviled.

Where the Tea Party was met with skeptical claims of their motivations - with some reporters claiming they were merely corporate backed puppets and others implying they were spurred on by their racist opposition to the first black president – the Occupy Wall Street crowd was depicted as an almost genial "grassroots" movement.

While network reporters weren't hesitant to describe the Tea Party as conservative, only once did a reporter attach even the "liberal" label to the overtly leftist Wall Street protestors.

Network anchors like Brian Williams couldn't be bothered with ideological labeling of the occupiers as he was, on the October 5 NBC Nightly News, too busy celebrating the arrival of the "massive protest movement" that "could well turn out to be the protest of this current era."

ABC's Diane Sawyer was so excited she tripped herself up in hyperbole as she proclaimed, on the October 10 World News, that the movement had "spread to more than 250 American cities, more than a thousand countries – every continent but Antarctica." (Video) Sawyer would have to correct herself on a later edition of the program as she clarified it was "more than a thousand cities around the world – every continent but Antarctica." That's still a tremendous exaggeration.

Most astoundingly, the networks' Occupy Wall Street (OWS) stories were overwhelmingly sympathetic: Protesters and supporters of the movement dominated the soundbites, with 109 (87%) to just 8 critics (6%), with another 8 soundbites from neutral sources. Five of the eight soundbites unsympathetic to the protesters were brief clips of GOP presidential candidate Herman Cain blasting the occupiers. In addition to the 109 pro-OWS soundbites, seven times guests on the Big Three network morning shows expressed sympathy for the protestors. No guests opposed the protests. 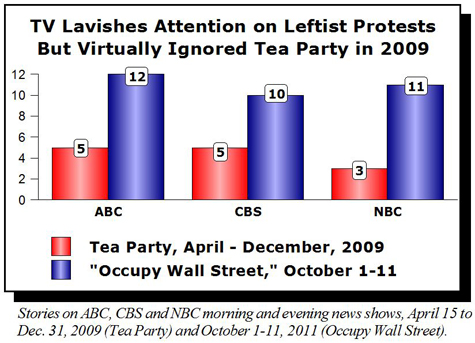 MRC analysts tracked all the stories on the Big Three broadcast networks' evening and morning news programs (ABC's World News and Good Morning America, CBS's Evening News and The Early Show, NBC's Nightly News and Today show) and found that from October 1 through October 11 network anchors, and reporters, in addition to the 33 full stories, delivered 15 brief items and 14 mentions in other stories not devoted strictly to the Wall Street protest.

In 2009 Tea Partiers were repeatedly but accurately described as conservative. Back on the April 15, 2009 Today show, NBC's Chuck Todd's labeling was typical when he introduced the Tea Party movement to viewers this way: "There's been some grassroots conservatives who have organized so-called Tea Parties around the country, hoping the historical reference will help galvanize Americans against the President's economic ideas. But, I tell you, the idea hasn't really caught on."

However, when it came to appropriately labeling the OWS crowd as leftist or liberals, it happened exactly one time, when on the October 11 edition of ABC's Good Morning America, co-anchor George Stephanopoulous asked Obama campaign strategist David Plouffe if he thought the OWS protestors were the "liberal version of the Tea Party?" and wondered if that was a "good thing for the White House?"

The only other usages of the world "liberal" came when Columbia University's Dorian Warren, on the October 1 NBC Nightly News asserted that the protesters were "a liberal version of the Tea Party" and obligingly offered: "I think this could potentially carry over into the 2012 elections and get people to the polls." Then, on the October 9 edition of Sunday Morning, Rebecca Jarvis pegged Columbia University professor Todd Gitlin as "a liberal observer of the politics of the protest."

In fact, as the MRC's Business & Media's Julia Seymour documented, not one network report has called the protesters "radical," "extreme," "left-wing," or "socialist."

Digging deeper into the stories, a clear double standard emerges. Where the Tea Party's motives were met with skepticism, with some stories questioning if they were not a grassroots movement but rather an Astro-turf movement backed by corporations, the Occupy Wall Street crowd was repeatedly classified as "grassroots."

Back on the April 15, 2009 edition of ABC's World News, reporter Dan Harris told viewers that "critics on the Left say" the Tea Party was not "a real grassroots phenomenon at all, that it's actually largely orchestrated by people fronting for corporate interests."

But when labor unions started joining the OWS protests, reporters didn't greet that information with jaundiced skepticism of a movement being taken over by well-funded, well-heeled union organizers, but treated it as recognition of the growing respect and influence they were gaining.

On the October 5 Today show, Mara Schiavocampo alerted viewers that on "Tuesday, several labor unions, including transit workers and teachers, joined activists for a march to Wall Street. Today they plan to join protesters in what could be their largest event yet, a rally and march in lower Manhattan." In the very next sentence the NBC correspondent was careful to remind her viewers: "The grassroots movement has no official leaders."

While the Tea Partiers were portrayed as racist and rude yokels, the OWS crowd has been portrayed in a decidedly more positive light with reporters highlighting cute school kids, spending their Columbus Day holiday holding up signs in opposition to corporate America and even featured a kindly grandmother baking cookies for the crowd.

On the October 10, NBC Nightly News, Mara Schiavocampo highlighted: "From school to the streets. On Day 24 of the Occupy Wall Street protest demonstrators were joined by a group of students on their day off." Viewers were then presented clips of little children holding signs that read: "Tax the one percent, not the 99 percent!" and "Tax the greedy, feed the needy!"

Despite hundreds of arrests, the media have painted the Occupy Wall Street crowd as friendly, genial, even industrious folk who started their own newspapers, and taught Yoga classes to pass the time.

Over images of protestors stretching, on the October 10 Evening News, an impressed Jim Axelrod glowingly noticed: "The Occupy Wall Street protestors have set up a camp with a food court, newspaper, medical unit, Internet café, even yoga practice."

On the October 3 edition of ABC's World News, Dan Harris played tour guide to the protest scene: "This is a surprisingly functional little city. Let me give you a little tour. It starts here with the information desk for people newly arrived. Behind that this whole area back here, this is the media area. It's filled with bloggers and other people getting the word out and powered by donated generators. And this is the food station. It's all free and all donated including some cookies that came in today from a grandmother in Idaho." 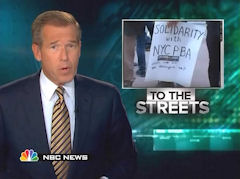 In subsequent days, the effusive notices came streaming in from the network anchors.
On the October 5 Nightly News, NBC's Brian Williams trumpeted: "While it goes by the official name 'Occupy Wall Street,' it has spread steadily and far beyond Wall Street, and it could well turn out to be the protest of this current era." ABC's weekend evening news anchor David Muir, on the October 9 World News, hailed: "Look at the images coming in tonight, spelling out the anger. This sign in New York, 'The rich get bailed out, the poor get sold out.'"

In contrast, the network anchors treated the Tea Party much more harshly, depicting its members as violent, racial slur hurling thugs. As the MRC's Rich Noyes pointed out in the special report, TV's Tea Party Travesty, in September of 2009, 'NBC's Brian Williams trumpeted Jimmy Carter's charge that the Tea Party was motivated by race: 'Signs and images at last weekend's big Tea Party march in Washington and at other recent events have featured racial and other violent themes, and President Carter today said he is extremely worried by it.''

In March of 2010, Noyes found that on the night of the final vote on ObamaCare in March, for example, ABC's Diane Sawyer cast Tea Partiers as out-of-control marauders, "roaming Washington, some of them increasingly emotional, yelling slurs and epithets." CBS's Bob Schieffer also cast a wide net, accusing "demonstrators" of hurling "racial epithets" and "sexual slurs," and even conjured images of civil-rights era brutality: "One lawmaker said it was like a page out of a time machine."

Schieffer's colleague Jeff Greenfield, on the September 20, 2009 edition of CBS's Sunday Morning, went as far to wonder about the Tea Party: "Does this new militancy on the Right pose an opportunity for the Republican Party or create a dilemma?" He added: "Some of it is aimed specifically and virulently at Obama....At his background, at his race, at his agenda."

In the media's coverage of the Wall Street occupiers and Tea Partiers, a clear tale of two different protests is seen. One that grew out of concern for out-of-control government spending was initially ignored and treated to catcalls of racism and thuggery by ABC, CBS and NBC. The other, a leftist movement screaming for an even more expansive government, that actually resulted in hundreds of arrests, was greeted by the Big Three networks with a tidal wave of coverage full of friendly talking heads.