Stressing Sotomayor's Life, Not Her Liberalism 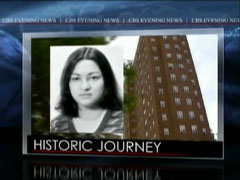 Two early themes have emerged from network news coverage of Sonia Sotomayor's nomination to the Supreme Court. First, network reporters have spared no adjective in exulting over the "incredible," "amazing," and "remarkable" story of Sotomayor's climb from public housing to a chance for the Supreme Court.

Second, the notion that she is a liberal judge with an activist approach is cast as merely a partisan claim from her conservative opponents - even though network reporters eagerly declared both John Roberts and Samuel Alito "conservative," "very conservative," "quite conservative," and "ultra-conservative" when they were nominated four years ago. 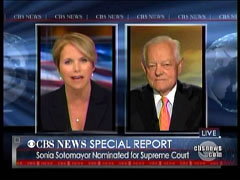 All three networks broke into regular programming when President Obama announced his selection of Sotomayor on Tuesday morning, and all three lavished praise on the New York judge. CBS's Bob Schieffer and Katie Couric were the most effusive, stressing every biographical talking point the White House put out. Schieffer exulted that Sotomayor was "the political advisor's dream candidate," while Couric gushed over her "very, very compelling life story."

On their Evening News, CBS was again the most excited by Sotomayor's biography, with Couric trumpeting at the top of the show "the judge's incredible journey," and "amazing life story." Reporter Priya David offered an effusive sketch of Sotomayor's life: "Her beginnings couldn't be much more humble...."

On Wednesday's Good Morning America, ABC's Claire Shipman narrated what seemed like a campaign ad on behalf of the judge: "Even as a little girl, growing up in a drug-ridden South Bronx housing project, stricken with juvenile diabetes, she had that trademark knack: instead of seeing dead ends, young Sonia saw possibilities; instead of giving up, she investigated every angle....She's also an avid Yankees fan, a mean guacamole maker, and a fierce biker." 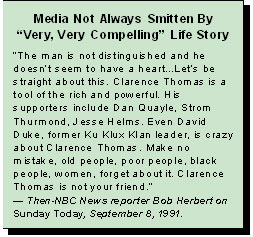 When Clarence Thomas was nominated in 1991, his personal life story of growing up in poverty did not earn him much good will from liberal network reporters (see text box).

As for Sotomayor's ideology, network reporters generally refrained from actually calling her a "liberal," associating that perfectly valid label with her "conservative" critics. "Despite her remarkable personal odyssey, Judge Sotomayor is already being called a liberal activist by some conservative groups," NBC's Pete Williams announced on Tuesday's Nightly News. ABC's Jonathan Karl on Wednesday's Good Morning America: "To conservatives, Sotomayor is a liberal activist who uses the courts to impose her own personal views."

On Wednesday's Early Show, CBS correspondent Bill Plante permitted Supreme Court expert Tom Goldstein to point out: "She's on the left, and she would be on the left in the Supreme Court. But she's not an extreme partisan, an extreme ideologue, by any measure." But Plante followed up by citing liberal lawyer Jonathan Turley as speaking on behalf of "most legal observers." Turley vouched for Sotomayor: "I don't believe she's an activist. I don't believe that she shows great bias."

It's not a surprise that the most liberal president in recent memory has picked an ardent liberal for his first Supreme Court vacancy. But network coverage of conservative nominees emphasized the judge's perceived ideology and controversies. With a liberal nominee, the networks have clearly deemed Sotomayor's professional philosophy as less important than her personal biography. - Rich Noyes