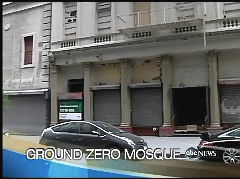 By a wide margin - 66 percent to 29 percent, according to the most recent ABC News/ Washington Post poll - the public is opposed to building that proposed $100 million Islamic cultural center near the site of the destroyed World Trade Towers. This is not a lightly-held opinion: more than half (53%) told ABC news they are "strongly opposed" to building it near Ground Zero, vs. only 14 percent who report being "strongly" in favor. (Scroll to Question 30.)

So in the face of such obvious public sentiment, are the big broadcast networks reflecting such public sentiment in their coverage? Or are journalists implicitly repudiating their viewers by touting accusations that opposition to the mosque is motivated by America's supposed "Islamophobia"?

To find out, MRC analysts reviewed all 52 stories about the Ground Zero mosque on the ABC, CBS and NBC evening newscasts from August 14 through September 13 - the first month after President Obama propelled the issue into the headlines with his remarks at a White House dinner.

The results show that the networks have tilted in favor of mosque supporters and against public opinion, with more than half (55%) of all soundbites or reporter comments coming down on the pro-mosque side of the debate, vs. 45 percent for opponents.

Even those overall numbers fail to show how the debate has grown increasingly tilted over time. During the first week (August 14-20), the networks actually provided more visibility to mosque opponents - 55 percent of soundbites, vs. 45 percent for mosque supporters. But in the following weeks (August 21 to September 13), the networks' coverage lurched in the other direction, with mosque supporters receiving a 63 percent to 37 percent advantage. (See chart.) 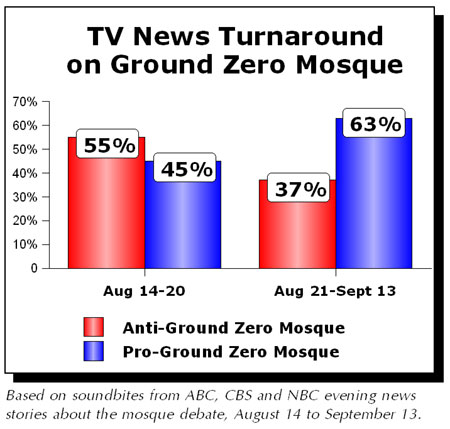 Our analysts tallied as "pro-mosque" all statements and soundbites that either: supported the idea of building the Islamic center on its currently proposed site; defended or praised the project's organizers (mainly the Imam Feisal Abdul Rauf); or criticized the other side as bigoted or "Islamophobic." Anti-mosque statements/soundbites presented the other side: criticized the plans to build the center and/or the project's organizers, or defended mosque opponents from charges of bigotry.

The shift in coverage occurred after mosque proponents began tarring their opponents as bigots. A pair of protests on Sunday, August 22 - one in favor of the mosque, one against - drew coverage on all three network newscasts, and all three highlighted the accusation from pro- mosque demonstrators that a contrary stance was evidence of what Time magazine's cover story that week dubbed "Islamophobia."

What had been a relatively even-handed debate about balancing the sensitivities of 9/11 families with America's tradition of religious freedom morphed into a one-sided story about beleaguered Muslims facing hardship at the hands of bigoted Americans. On the August 23 Nightly News, for example, NBC's Ron Allen picked up how "many Muslim-Americans insist this debate is more evidence of religious intolerance."

On the August 25 CBS Evening News, fill-in anchor Jeff Glor linked the stabbing of a cab driver to the mosque debate: "That alleged hate crime took place in the shadow of a heated and divisive debate over whether a mosque should be build near Ground Zero....Other controversies over new mosques in Wisconsin and Kentucky have led some to question: Is America becoming Islamophobic, a prejudice against Muslims?"

Four days later, on ABC's World News, correspondent Steve Osunsami cited "a string of recent incidents suggesting that many Americans don't care for Muslims - the back and forth over the Islamic center near Ground Zero, the cab driver who was stabbed simply for being Muslim."

"Critics say all the rhetoric is fueling anti-Muslim violence," ABC's Dan Harris chimed in on the September 5 World News.

ABC and CBS both touted exclusive interviews with organizers of the Ground Zero mosque project, but never gave the same privilege to mosque opponents. These interviews were hardly probing. CBS's Scott Pelley interviewed Sharif el-Gamal, the real estate developer who bought the property two blocks from Ground Zero, excerpts of which were shown on the August 27 and August 30 Evening News.

"This facility that is being debated all around the world is universally known as the Ground Zero mosque," Pelley told el-Gamal. "What do you call it?"

"It should be universally known as a hub of culture, a hub of co-existence, a hub of bringing people together," el-Gamal enthused.

ABC's Christiane Amanpour interviewed Abdul Rauf for the September 12 This Week, with excerpts shown on the September 9 World News. She quoted Abdul Rauf as arguing that failing to proceed with his mosque concept would "strengthen the radicals in the Muslim world, help their recruitment. This will put our people, our soldiers, our troops, our embassies, our citizens, under attack in the Muslim world. And we have expanded and given and fueled terrorism."

Seemingly deaf to what she just heard, Amanpour characterized Abdul Rauf's statement this way: "So, he said he wasn't making any threats or predicting any terrible worst case scenario."

Alone among the three evening newscasts, ABC's World News also offered soundbites to Ibrahim Hooper, a spokesman for the Council on American Islamic Relations (CAIR) to propose that Americans were prejudiced against Muslims. (NBC's Today on September 9 also featured a CAIR representative to speak out against Americans as bigoted.) CAIR is currently listed by federal prosecutors as an unindicted co-conspirator in their investigation of funding for Middle Eastern terrorist groups such as Hamas.

"I've really never seen the level of Islamophobia that we're experiencing today," Hooper blasted on the August 16 World News, a soundbite that was repeated on the August 29 broadcast. A week later, on the September 5 World News, Hooper was back to condemn the "hysterical atmosphere we're in right now."

Parsing the numbers a different way provides some insight into how the networks seem to conceptualize the issue of balance: Debate about the Islamic center itself and/or its organizers was almost perfectly balanced (57 soundbites arguing against the project, vs. 54 soundbites in favor, or a 51-49% split). But the "debate" about whether opposition reflected Islamophobia was almost perfectly one-sided: 27 soundbites (93%) leveling that accusation, with just two soundbites (7%) offering a defense.

In other words, the networks permitted a balanced debate about a proposed real estate project, but allowed mosque supporters to attack the majority of Americans as "haters" and "bigots" without adequate debate.

That's yet another sign that the liberal, elite media are hopelessly out of touch with the public they ostensibly serve.