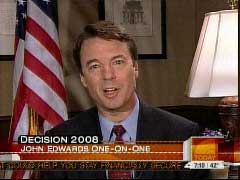 In John Edwards' first broadcast network interview since his official campaign bloggers resigned after infuriating Christians with hateful and bigoted postings on their own Web sites, NBC Today co-host Meredith Vieira let the liberal Democrat completely off the hook regarding both "Blogger-gate" and the candidate's own inept response. Instead, as news analyst Geoff Dickens noted on the MRC's NewsBusters blog, "Vieira focused her questions from the left on Iraq and his opinion of the dust-up between rivals Hillary Clinton and Barack Obama."

Indeed, Vieira found the time to explore with Edwards the complaint of far-left anti-war candidate Dennis Kucinich: "He [Kucinich] voted against the war resolution and he said, quote, 'We had an audition for President in October 2002, and that the President must have,' again his words, 'the clarity of vision, the judgment to make the right decisions on life and death matters.' The implication being that those who voted for the war failed the audition. People like you failed the audition. Do you, do you agree with that sir?"

In the two weeks since Edwards' campaign bloggers became an issue, none of the big three broadcast networks have aired a syllable about this story, even though ABC's Terry Moran, co-anchor of Nightline, questioned on ABC's Web site whether Edwards condoned "hate speech" by employing bloggers Amanda Marcotte and Melissa McEwan. On her own blog, www.pandagon.net, Marcotte took an outrageously offensive anti-Christian approach, such as this "joke" about the so-called morning-after pill.

Q: What if Mary had taken Plan B after the Lord filled her with his hot, white, sticky Holy Spirit?

A: You'd have to justify your misogyny with another ancient mythology.

Edwards' first public statement arrogantly suggested his bloggers had meant no harm: "I've talked to Amanda and Melissa; they have both assured me that it was never their intention to malign anyone's faith, and I take them at their word."

"If a Republican candidate teamed up with a right-wing blogger who spewed this kind of venom, how would people react?" ABC's Moran asked on his personal blog. It's a good question - but NBC's Vieira blew the chance to pose it to Edwards this morning.