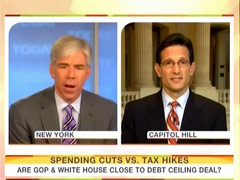 On Election Day 2010, then-CBS Early Show anchor Harry Smith posed a hypothetical question about newly-elected Republicans to Ann Coulter: "There'll be a routine vote, for instance, to increase the debt ceiling and the Tea Party guys are going to say, 'Over my dead body,' and the government comes to a screeching halt. Then what happens?' The conservative author confidently predicted: 'Well, the media will blame the Republicans."

And that's precisely what has occurred. A Media Research Center study of the Big Three network evening and morning programs finds that, when it came to assigning blame for lack of a debt ceiling resolution, ABC, CBS and NBC's coverage has placed the overwhelming majority of the blame on Republicans' doorstep.

MRC analysts watched all 202 stories on the debt ceiling from July 1 through July 22, looking for statements which assigned blame or responsibility for the failure to reach a settlement. Of the 85 stories that included such statements, the skew was lopsidedly anti-Republican, with 56 stories (66%) mainly assigning them the blame for the impasse. Even though Democrats control both the Senate and the White House, only 17 network stories (20%) suggested they bore more responsibility, a greater than three-to-one disparity (see chart). Twelve stories offered a balanced discussion of which party ought to be blamed. 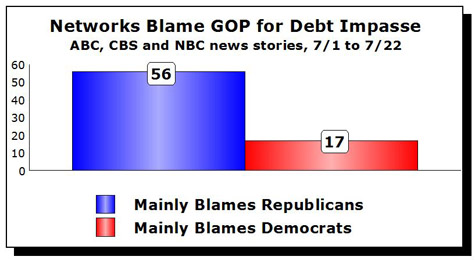 [METHOD: Analysts reviewed each story, then tallied all reporter statements and soundbites which clearly assigned responsibility to Republicans or Democrats. If the majority of statements within that story assigned blame to one party or the other, it was scored as "blaming Republicans" or "blaming Democrats." If the story contained a balanced number of statements, it was recorded as 'balanced.']

Of the Big Three networks, NBC was the most likely to pin the blame on the GOP, by a 27 to 6 margin (with four stories assigning equal blame). On CBS, 19 stories blamed Republicans vs. nine which tilted in favor of blaming Democrats (and five balanced), while on ABC, ten stories singled out Republicans for blame, vs. only two that painted Democrats as responsible and three suggesting equal responsibility.

On the July 12 Today show, NBC's Matt Lauer exemplified his network's tendency to blame Republicans when he asked conservative talk show host Laura Ingraham the following: "When it comes to taxes, this issue of revenues, is there any way this deal gets done without the Republicans compromising somewhat on taxes?...President Obama talks about shared sacrifice. Where is the shared sacrifice going to come from on the Republican side?"

Following his lead, Lauer's colleagues Ann Curry and Amy Robach were far more skeptical of Republican motives in the debt talks, going as far to insist their proposals were just for "show." Robach, on the July 16 Today show, pondered: "No one believes that this has any chance of passing; therefore, this looks very political. Is that risky for the Republicans, in terms of it looking like they're just wasting time?"

Then on the July 19 Today show, co-anchor Curry also suggested to congressional reporter Kelly O'Donnell that the GOP's "cut, cap and balance" plan was a diversion: "Tea Party conservatives love this plan. The President has already said that he's going to veto it. Do we really have time for a plan that is really just show, Kelly?"

Not to be left, out Meet the Press host David Gregory got in a shot against the GOP when he filled in as host on the July 7 Today, pressing Republican House Majority Leader Eric Cantor: "If Democrats are willing to cut trillions of dollars, which is certainly what you wanted in spending cuts, what is the Republican Party prepared to do in this negotiation that is hard?"

Over on ABC, Jake Tapper used the words of former Republican Senator Alan Simpson to shame the GOP, as seen in this excerpt from a July 12 story aired on ABC's World News:

ALAN SIMPSON: "If that — the stuff that's going on in my party, where the pettiness overcomes the patriotism, it's disgusting to me."

On CBS, Scott Pelley set-up the President to tee off on Republicans, when he interviewed Barack Obama on the July 12 edition of the CBS Evening News. Pelley reminded viewers that 'Ronald Reagan and Tip O'Neill were on opposite sides of the political spectrum, but they respected each other, they liked each other and they got things done.' This led to Obama to chide: "If Ronald Reagan could compromise, why wouldn't folks who idolize Ronald Reagan engage in those same kinds of compromises?"

CBS correspondent Nancy Cordes' opening to her July 14 Evening News story was typical of that network's tilt, as she transmitted a litany of Democratic complaints against House Majority Leader Eric Cantor: "In Washington, where the blame game is a blood sport, Democrats have found their fall guy....Senate Majority Leader Harry Reid called Cantor childish."

Assigning herself the role of judge, Cordes validated the Democratic blame-setting: "The ambitious six-term Congressman has given his opponents plenty of ammunition....He blew up the original debt negotiations, led by Vice President Biden, when talk turned to tax increases, then pulled Speaker Boehner back from a grand bargain with the President because taxes were part of the deal."

Democrats believe that they gained political advantage during the government shutdowns in late 1995 and early 1996, when the national media also disproportionately battered the Republican side of the stand-off. Once again, the broadcast networks seem eager to hand another liberal President an election-year narrative: that conservatives are an intransigent obstacle, while liberals offer a 'balanced' and reasonable alternative.