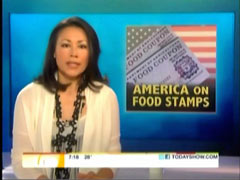 In the '80s the liberal media filled the airwaves with tales of woe from the homeless as a way to distract viewers from the runaway success of Reaganomics. In the 2000s, the same media chatted with one frustrated gas station customer after another to slam then-President George W. Bush.

However in 2011, with over 44 million Americans on food stamps, a new high according to the latest data from the U.S. Department of Agriculture (See Table 2), the Big Three broadcast network news programs have been virtually devoid of anecdotal sob stories of moms and dads struggling to pay for their kids' box of Frosted Flakes, as a way to hammer Barack Obama's failed economic policies.

A new chart released by the Supplemental Nutrition Assistance Program (SNAP) on May 31, according to a story by the Examiner.com's Kenneth Shortgen, showed that "just under 14.5% of the American public received food stamp benefits." This startling statistic has so far failed to provoke a rash of food stamp horror stories that badger the Obama administration for its failed economic policies.

MRC analysts reviewed the evening and morning news shows for NBC, ABC and CBS from January 1 through June 6 and found only two examples (both on CBS) of someone having to pay a portion or all of their grocery bill with food stamps. In not one story were Obama administration policies blamed for an economy where so many have ended up on food stamps. Altogether there was a total of just six stories that even mentioned food stamps as an issue. 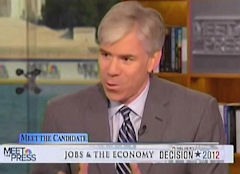 On NBC there was just one anchor brief, by Ann Curry on the February 3 Today show, that relayed a Department of Agriculture statistic that "Some 43.6 million Americans are currently relying on food stamps for groceries...and that's nearly 15 percent of the U.S. population." There was no mention of this bit of bad economic information on the NBC Nightly News with Brian Williams.

That Curry story was a lot more than what ABC had to offer, which has yet to mention the troubling statistic on either ABC World News with Diane Sawyer or Good Morning America.

As noted earlier, CBS News did manage to talk to two different people relying on the food stamp program. During a Wyatt Andrews "American Spirit" story about a single mom who took in eight children after her sister drowned, aired on the March 9 Evening News with Katie Couric, Andrews noted that the law firm clerk was aided by "food stamps and church donations" for "help with the impossible grocery bills."

On CBS's May 30 edition of The Early Show - as part of their Memorial Day coverage of unemployed veterans of the Iraq and Afghanistan wars - did air a sound bite from Shannon Dodson, who admitted that it was "hard for me to now be on food stamps" after having served her country. Yet nowhere in the piece by Jeff Glor did Obama administration policies come under fire for the bad economy that possibly led to this Air Force vet's predicament.

There were only three other mentions of the food stamp program on either the CBS Evening News or The Early Show. On February 11, Bill Plante on CBS's morning show relayed that Obama had called for "$2.2 billion to be restored to the food stamp program" as part of his budget proposal, then later on the April 13 edition of the Early Show Plante relayed that part of Republican Congressman Paul Ryan's plan included "putting caps on Medicaid, food stamp assistance and housing assistance programs while reducing taxes for the very wealthy and for corporations."

On the April 5 CBS Evening News, Nancy Cordes also reported that "Republicans want to put a cap on Medicaid, food stamp assistance, and housing assistance programs, giving states a fixed amount of money each year to insure the poor instead of making payments that fluctuate based on need."

A Nexis search over the same period did reveal that the food stamp issue was brought up on programs other than the morning and evening news show, but not in a way to blame Obama for any sort of economic mess but rather to use a blunt instrument to bash any Republican who dared bring up the issue as a racist. Which is precisely what happened with former GOP House speaker and current presidential candidate Newt Gingrich when he raised the topic.

On the May 15 edition of NBC's Meet the Press, that show's host, David Gregory, throttled Gingrich for daring to bring up the food stamp issue, going as far to accuse him of using "racially-tinged language," as seen in the following excerpt:

DAVID GREGORY TO GINGRICH: First of all, you gave a speech in Georgia with language a lot of people think could be coded racially-tinged language, calling the president, the first black president, a food stamp president.

GREGORY: What did you mean? What was the point?

GINGRICH: That's, that's bizarre. That-this kind of automatic reference to racism, this is the president of the United States. The president of the United States has to be held accountable. Now, the idea that-and what I said is factually true. Forty-seven million Americans are on food stamps. One out of every six Americans is on food stamps. And to hide behind the charge of racism? I have-I have never said anything about President Obama which is racist.

GREGORY: Well, what did you mean?

REP. GINGRICH: Well, it's very simple. He has policies-and I used a very direct analogy. He follows the same destructive political model that destroyed the city of Detroit.

On that same program, in the roundtable discussion, the Washington Post's E.J. Dionne picked up on Gregory's "racially-tinged" line and ran with it: "But, you know, Newt has always wanted to run for president, so I'm actually glad he's doing it. And he seems to be trying to cast himself as a good-natured flamethrower, and he was very good at kind of fending off those questions. But he can never resist going a few steps over the top. Right during your interview, you asked him if this comment on food stamps is racially tinged. And he doubles down and says, 'Well, do we want the U.S. to become like Detroit,' aka Motown, you know?"

Also on that same day, over on ABC's Sunday roundtable show, This Week, Christiane Amanpour aired Gingrich's "food stamp president" quote before her interview with South Carolina's Republican Governor Nikki Haley in which she was asked about the former House Speaker's presidential chances.

ABC had one other mention of the food stamp issue, when John Quinones on the January 21 edition of Prime Time Live noted that "food stamp usage was up 20 percent from last year with a striking one in eight Americans needing assistance." Quinones uttered that statistic right before going into an ABC News hidden camera investigation where they hired an actress to pretend she was on assistance to see how fellow grocery store customers in line behind her would react to her inability to pay her bill.

A nation of 44 million Americans on food stamps and ABC couldn't find one actual person with a sad story to interview, so instead they hired a pretend victim of the Obama economy. Although, just like the other networks, Quinones didn't bother to tie even the fake victim story to Obama's polices as his name was never mentioned in the story.

If the number of Americans on food stamps had reached a record level under a Republican president it's likely that viewers of the Big Three network news programs would have been inundated with images of hungry Americans lining up to pay their grocery bill with food stamps, but with a Democrat in office the current crisis has gone virtually uncovered.