Media Coverage of the 9/12 Protests: A Report Card 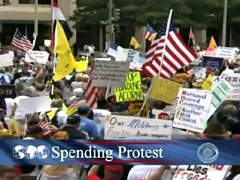 Big liberal protests, such as the Million Mom March (for gun control), the 2006 demonstrations in favor of illegal immigrants' "rights," and numerous anti-war marches all garnered heavy play and adoring coverage from the broadcast networks, cable news outlets, and big papers like the New York Times. So how did those news outlets react to Saturday's huge protest with conservative themes? MRC's analysts scrutinized the coverage; here's their report card:

■ ABC, CBS and NBC: The broadcast networks did not offer any pre-rally coverage before Saturday's protests, but offered decent coverage of the event itself. ABC's World News on Saturday was pre-empted by college football, but Good Morning America offered full reports on both Saturday and Sunday, as did NBC's Today. Both the NBC Nightly News and CBS Evening News led with the rally on Saturday night, although CBS's morning news shows gave the protest almost no attention. 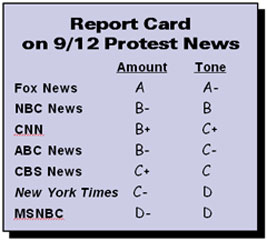 The tone of coverage, however, was largely antagonistic. Opening Saturday's Good Morning America, co-host Bill Weir painted the protesters as driven by rage: "This morning, outrage. Protesters descend on Washington to rally against the President's health care plan. As civility gives way to shouting, what's fueling all this anger?" On the CBS Evening News, reporter Nancy Cordes also highlighted the supposed radicalism of the crowd: "Homemade signs accused Mr. Obama of socialism, communism and worse."

But on Saturday's Nightly News, anchor Amy Robach was more effusive, touting "a sea of people as far as the eye could see." Reporter Tom Costello suggested official estimates undercounted the crowd ("Our own people think hundreds of thousands were here"), and he showcased soundbites from official speakers, including a Chrysler auto dealer who lost his business to Obama's intervention in the private sector.

■ CNN, MSNBC, and the Fox News Channel: By far, Fox News offered the most detailed coverage, with a two-hour midday program on Saturday plus regular updates throughout the day, and FNC stuck to presenting the protesters' point of view, not denigrating them. One sour note came from host Geraldo Rivera Saturday night, as he slammed the protests: "Whether race is the subtext of the current event, there is no doubt that the rhetoric could not be more overwrought."

On CNN, most of the daytime coverage was respectful, if not as intensive as on FNC. During the 5pm ET hour, the tone began to sour, as correspondent Jim Spellman argued that participants with "outlandish conspiracy theories" and who were "comparing President Obama to Hitler" were "a sizable thread. It's not just a couple of people on the edges."

MSNBC offered light coverage Saturday morning, switching to taped programming at noon ET. When President Obama spoke in Minnesota, the network returned to live coverage for an hour, but utterly ignored the news from Washington. On Sunday, the network mentioned the rally in the midst of other political news; regular pundit Eleanor Clift dismissed the protesters as "the fringe of the fringe."

■ New York Times: Our TimesWatch editor Clay Waters reports that the Times buried the protests on page A37 of Sunday's paper. Although tens of thousands marched on Capitol Hill, the 932-word story was only slightly longer than the 724-word story the paper granted back in March to an ACORN protest with only 40 participants.

Reporter Jeff Zeleny painted the protesters as "angry" and "profane," and asserted that the rally contained "no shortage of vitriol" - as if there were never raised voices or obscene signs at left-wing rallies.

When liberals were the ones behind the megaphones, the media embraced big protests as an important gauge of the public mood. Now that the roles are reversed, the double-standard is glaring.