But instead of trumpeting the amazing "Bush economy," TV news has downplayed this recent good news while hyping the bad news of rising fuel costs. Indeed, a new Media Research Center study suggests the broadcast networks are not just noting the discontent about prices but actively stoking public outrage. 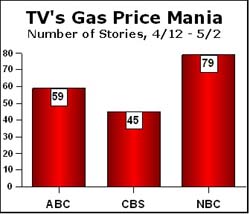 To measure the media hype, MRC analysts reviewed ABC, CBS and NBC morning and evening news shows from April 12 through May 2. During those 21 days, the networks collectively aired 183 stories about rising oil and gas prices - 125 full reports or interview segments, plus another 58 brief anchor-read items.

NBC pushed its "Pain at the Pump" theme the hardest, with 48 stories on Today and another 31 on the NBC Nightly News. ABC's Good Morning America aired 30 stories on gas prices, plus another 29 on World News Tonight. CBS's Early Show had 28 stories, while the CBS Evening News aired 17.

In contrast, only four network stories during this period mentioned the low unemployment rate, 4.7 percent. And after the government reported strong economic growth on April 28, ABC and NBC each aired one story, while the CBS Evening News has yet to mention that good news.

■ Adding fuel to the fire: Apart from heavy coverage within their newscasts, all three networks employed loaded language in the promotional teases they used at the top of each broadcast. Just over half of the news shows (62 out of 122) promoted upcoming gas price stories, with most pushing hard on the idea of economic pain and many pointing the finger at oil companies. 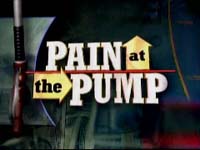 In 21 days, the NBC Nightly News opening contained eight recitations of the phrase "Pain at the Pump." Among all shows, ten began by claiming "skyrocketing" or "sky high" gas prices, with "soaring" used seven times.

The oil companies were TV's villain. On Today April 24, Katie Couric asked viewers, "Is Big Oil gouging you?" The opening of the April 24 CBS Evening News included this indictment: "Gas price gouging. I'm Sharyl Attkisson with what Congress is and is not doing about it." On Good Morning America April 24, Diane Sawyer suggested fighting back: "Pain at the pump. Oil companies getting ready to raise prices again. Is it time to turn the tables and tax their record profits?"

Three days later, her colleague Charles Gibson teased: "Pain at the pump. The Big Oil companies report billions in profits....Is our pain their gain?" Opening CBS's The Early Show on April 27, co-host Rene Syler played the envy card: "As Americans struggle to keep up with high gas prices, oil companies are reporting record earnings. Is this a case of corporate greed out of control?"

The networks pushed the idea gas prices were inflicting economic misery. On the April 26 NBC Nightly News, anchor Brian Williams fretted: "Running on empty, where the rubber meets the road. School and soccer practice and commuting, all at $3 a gallon. Parents, more than ever, feeling that pain at the pump." On the April 28 World News Tonight, anchor Elizabeth Vargas detected desperation: "Desperate measures. Americans beating the oil companies at their own game, making fuel in their homes." In that story, reporter Dean Reynolds found a Tennessee man selling "do-it-yourself ethanol kits, otherwise known as stills." 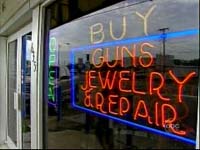 ■ Touting angry consumers: The networks added to the outrage by airing 151 quotes from upset or beleaguered gas buyers. On the April 21 Nightly News, Anne Thompson showed a California man filling up his pick-up truck. "$3.41," he groused. "They should start handing out knives to cut your arm and leg off." On the April 24 World News Tonight, ABC's Jake Tapper surveyed the hardship, claiming that "the most desperate are hocking valuables at pawn shops." Tapper then showed a commuter, Kris Waters, who related: "I had to pawn a ring that my mother gave me and my wedding set just in order for my husband to get back and forth to work in his truck because gas prices are so ridiculous."

NBC's Today on April 27 presented a disgruntled college student, Karen Morgan. Reporter Janice Shamlian found Morgan idling at a fast-food drive-thru lane. "Cash is tight," Shamlian argued, "but with the long line the price of a value meal is going up by the minute." Morgan complained: "I've been waiting in line about six minutes, so the cost of my meal is probably going to be less than the price of the gas that I've wasted just waiting here." But if her cash is really so tight, why didn't Morgan just park her car and walk inside? 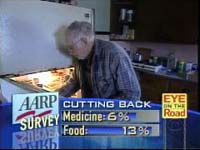 And on the May 1 CBS Evening News, Sharyn Alfonsi cited an outdated (September 2005) poll from the liberal AARP to claim the elderly were going without food or medicine to pay for gas. Alfonsi asked one senior citizen, "What do you think when you fill up your car with gasoline now?" The man replied, "I think, 'Have I got enough money to pay for all this and still get a loaf of bread?'"