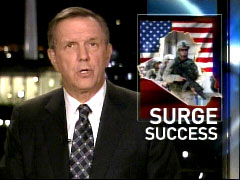 One year ago, liberal journalists depicted the surge of U.S. troops to Iraq as a certain failure. "A lot of people are going to go to bed tonight terrified," MSNBC's Chris Matthews opined just minutes after President Bush announced the policy on January 10, 2007. Other journalists were only slightly more subtle. "Many experts warn, it's too little, too late," NBC's Jim Miklaszewski argued on the January 8, 2007 Nightly News. The next morning on NBC's Today, the network's graphic describing Iraq was "Lost Cause?"

At the same time, leading Democrats left themselves no wiggle room as they, too, denounced the surge. Senator Barack Obama called it "wrong-headed" and countered with a proposal to pull nearly all U.S. troops out of Iraq by March 2008. Senator Hillary Clinton came back from a quick trip to Iraq to declare: "I am opposed to this escalation," while another Democratic candidate, Senator Joe Biden, blasted the troop surge as "a tragic mistake."

One year later, the President's surge strategy is well on its way to succeeding. The Iraqi parliament has passed several laws meeting required political reconciliation benchmarks. Attacks in Baghdad have fallen up to 80 percent in the past twelve months, Reuters reported February 16. Deaths among Iraqi military forces and civilians have dropped by more than two-thirds, from more than 2,000 per month in early 2007 to fewer than 600 per month since November.

And U.S. military deaths have also declined, falling from 126 in May 2007 to 40 in January 2008 and just 29 so far in February, with two days left in the month. Yet this good news seems to have diminished the media elite's interest in broadcasting any news from Iraq.

MRC intern Lyndsi Thomas helped tabulate all ABC, CBS and NBC evening news stories about Iraq since the beginning of 2007, just as the surge strategy was being implemented. After heavy coverage of the shift to a new Iraq policy in January and February 2007, the TV coverage began to closely track the rising and falling death rates for U.S. soldiers in Iraq. When the number of U.S. fatalities jumped in May, TV coverage jumped, too. When U.S. casualties began to steadily decline, TV coverage of Iraq dramatically decreased. (See chart.) 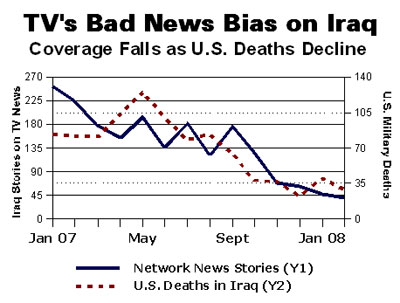 [For more on how the broadcast networks are tuning out the Iraq war, see the February 4 CyberAlert.]

While the amount of coverage has shriveled, the tone remains more negative than positive. So far this month, the three evening newscasts have aired just 41 items on Iraq, most (23) just brief items read by the anchor. A mere seven stories were field reports from Iraq. Only ABC's World News (February 13) noted the passage of key legislation by the Iraqi parliament, followed by a unique story the next evening on the success of the surge. The CBS Evening News and NBC Nightly News offered no such stories in February, but NBC did find time to report a visit to Iraq by actress Angelina Jolie.

Back in December, NBC's Tim Russert conceded that the media were less interested in covering a successful U.S. mission in Iraq, telling anchor Brian Williams that "with the surge in Iraq and the level of American deaths declining, it is off the front pages."

This is not neutral news judgment, but a great favor to anti-surge Democrats, since TV's lack of interest in Iraq spares them the chore of defending their now-discredited opposition to the surge. Does anyone think the media would have let John McCain off the hook had the surge failed as spectacularly as it has succeeded? - Rich Noyes