In the six months since November's elections, network reporters have zeroed in on "conservatives" - especially "religious conservatives" - as an energized and unwelcome force in American politics. As TV told it, George W. Bush won re-election because of strong support from "social conservatives" and would pack the courts with "conservative" judges. It was "conservatives" who pushed Terri Schiavo's right-to-life case, and "conservatives" like Tom DeLay and John Bolton were embroiled in controversy. 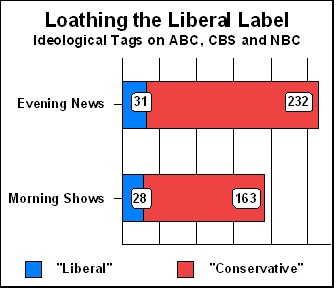 It's true conservatives have been making a lot of headlines, but even as the networks painted the right side of the spectrum as ideological, and even a tad fanatical, reporters rarely used ideological terms to define liberals. Since Election Day, network reporters branded politicians or groups as "conservative" 395 times, compared to 59 "liberal" labels, a greater than six-to-one disparity. Our last review in 2002 (using the same methodology, but looking only at evening shows) found a four-to-one skew.

As before, MRC analysts used the Nexis database to examine each use of "liberal" and "conservative" on ABC, CBS and NBC morning and evening news programs from November 3 through May 2. We rejected labels that weren't political (a "conservative investment") or outside the U.S. context (all those labels of Pope Benedict XVI, for example). We also excluded labels applied by a news source rather than the network reporter.

CBS provided the fewest labels (95) but the worst bias: just seven liberal tags, compared to 88 conservative ones, more than a twelve-to-one skew. NBC, whose three-hour Today spends more time on politics than other morning shows, had the most labels (193), but only 26 liberal modifiers. ABC had the most "balanced" approach - 140 conservative tags vs. 26 liberal labels, a five-to-one disparity. A few examples:

An Imbalanced Approach: On the April 26 Today, Katie Couric introduced a debate segment by branding just one side: "Dee Dee Myers was President Clinton's first White House press secretary, and Tucker Carlson is a conservative commentator and host for MSNBC." Were we supposed to believe Myers is non-ideological?

On the March 2 NBC Nightly News, David Gregory talked about "the conservative group USA Next" and the "senior lobbying group AARP," ideological opposites in the Social Security debate. On all four occasions the networks mentioned USA Next by name, they correctly called it "conservative," but not once during the six-month study period did a network reporter describe the AARP as "liberal."

Angry Extremists: On the April 25 Early Show, CBS's Joie Chen portrayed conservatives as an angry mob: "Thousands of Christian conservatives gathered in Kentucky, seething over what they call the 'filibuster against faith,' and spoiling for a political fight." Shortly after the election, on the November 8 Good Morning America, reporter Manuel Medrano trotted out an extreme label: "Arch-conservatives worry that [new Attorney General Alberto] Gonzales may not be conservative enough on hot-button issues." On the November 4 World News Tonight, ABC's Linda Douglass warned viewers that "the Senate has gotten much more conservative. One new Senator wants the death penalty for people who perform abortions."

It's not that network reporters misuse the "conservative" label. Rather, journalists systematically fail to identify those who seek a secular society and a strong, government-controlled, social welfare system as ideologues of the Left. The media's labeling scheme presents "conservatives" as less mainstream than their ideological adversaries, even as election returns show that it's liberals who need to start swimming back to the center.
- Rich Noyes