With President Obama and congressional liberals facing loud protests over their big government health care plan, journalists are casting the anti-ObamaCare forces as "ugly," "unruly," "nasty" mobs, with reporters presenting the most odious images (like pictures of Obama drawn as Hitler) as somehow representative. But when President George W. Bush faced left-wing protests, the media scrubbed their stories of radical voices and depicted demonstrators as mainstream, and even "prescient."

In January 2003, all of the broadcast networks touted an anti-war march organized by the radical International ANSWER, an outgrowth of the communist Workers World Party. Signs at the rally read: "USA Is #1 Terrorist," "Bush Is a Terrorist," and "The NYPD Are Terrorists Too." National Review Online quoted several protesters who claimed 9/11 was a Bush plot, "like when Hitler burned down the Reichstag," and argued Bush would "build a worldwide planetary death machine."

Reporters bypassed all that hate and showcased the protesters as everyday Americans. On ABC, Bill Blakemore stressed how the protest attracted "Democrats and Republicans, many middle-aged, from all walks of life," while CBS's Joie Chen saw "young, old, veterans and veteran activists - all united in the effort to stop the war before it starts." 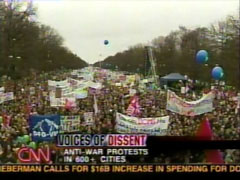 In Feburary 2003, CNN donated two hours of programming, "Voices of Dissent," to another International ANSWER event. Correspondent Maria Hinojosa enthused: "It's an extraordinarily diverse crowd. I have seen elderly men and women with mink coats carrying their posters." ABC's John McKenzie painted the protesters as idealistic: "So many voices, filling the streets, struggling to be heard."

On March 22, 2003, CNN offered 38 separate reports on a demonstration that day, but managed to never show any of the radical rhetoric from the podium. Over on ABC, Chris Cuomo saluted the leftists converging in New York City: "While protesters like today are a statistical minority, in American history protests like this have been prescient indicators of the national mood. So the government may do well to listen to what's said today." 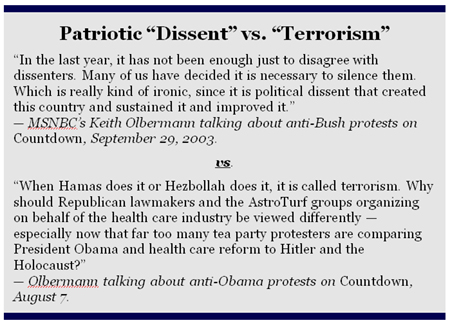 In October 2003, the far left rallied again in Washington, this time with a rapper leading a chant of "F**k George Bush!" and speakers praising Cuban dictator Fidel Castro. The next day's Washington Post ignored all of that in favor of a soft feature: "In D.C., a Diverse Mix Rouses War Protest."

In 2006, the left demanded money for New Orleans, with one protester wearing a George W. Bush mask adorned with Satan horns and a Hitler moustache. CNN reporter Susan Roesgen thought it comic, calling it a "look-alike" for the President. But covering the anti-big government tea parties in April 2009, Roesgen was aggrieved to see a picture of Obama with a Hitler moustache: "Why be so hard on the President of the United States though with such an offensive message?" 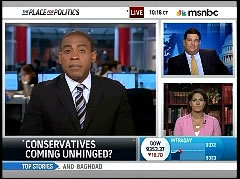 Today's protesters are being portrayed as crazy and even dangerous. Ex-CNN reporter Bob Franken called the anti-Obama protesters "a crazed group" engaged in "organized intimidation." An August 10 graphic on MSNBC wondered: "Conservatives Coming Unhinged?" Chris Matthews saw racism: "I think some of the people are upset because we have a black President." And ABC's Bill Weir on Friday warned "the rising anger is now ramping up concerns over the President's personal safety."

The double-standard is obvious. How can professional journalists possibly justify it?