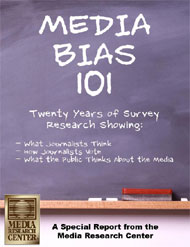 Surveys over the past 30 years have consistently found top journalists are much more liberal than the rest of America. At the same time, public opinion polls show Americans see the media as politically biased, inaccurate and an obstacle to solving society's problems. The numbers document a credibility crisis for journalism that only a swift move towards professionalism and fairness can fix.

The MRC has now created a one-stop online resource, "Media Bias 101," detailing more than 40 surveys revealing journalists' liberal opinions and the public's attitudes about bias. The report also contains page after page of quotes from top reporters discussing media bias - most denying the problem, but some admitting it.

■ The American Society of Newspaper Editors found self-identified liberals outnumbered conservatives in newsrooms by a four-to-one margin, 61% vs. 15%.

■ Most newspaper editors (71%) admit journalists' opinions "sometimes" or "often" influence coverage, vs. just one percent who say that "never" happens.

■ Nearly all of the media elite (97%) agree "it is a woman's right to decide whether or not to have an abortion," with five out of six (84%) strongly agreeing with this statement.

■ More than four-fifths of surveyed journalists voted for the Democratic presidential candidate in every election between 1964 and 1976.

■ More than three-fourths of "elite journalists" (76%) said they voted for Michael Dukakis in 1988.

■ 89% of Washington-based reporters said they voted for Bill Clinton in 1992. Only seven percent voted for George Bush, with two percent choosing Ross Perot.

■ An informal survey of Washington-based journalists in the summer of 2004 found them backing John Kerry over George W. Bush by a 12-to-1 margin.

■ In 2008, 96% of staffers at the online Slate magazine said they were supporting Barack Obama for president.

WHAT THE PUBLIC SAYS ABOUT BIAS

■ In every presidential election since 1992, most Americans saw the media as backing the Democrats. In 2008, 70% of Americans said journalists wanted Barack Obama to win, vs. nine percent who felt the media favored John McCain.

■ Every year from 2001 through 2009, Gallup found roughly three times more Americans said the media are too liberal vs. those who claimed a pro-conservative bias.

■ Nearly nine out of ten Americans (87%) "strongly or somewhat agreed that the news media have their own political and public policy positions and attempt to influence public opinion."

■ A 2007 Harvard survey found 84% believe the news media have too much influence on voters' decisions.

■ 55% believe media bias is more of a problem than big campaign contributions.

■ Just 29% of Americans think news organizations get their facts straight, and only 18% say the media are fair.

■ Nearly nine out of ten Americans (89%) think reporters "often" or "sometimes" let their own political preferences influence the way they report the news.

For details about these and many other surveys, check out the new "Media Bias 101" at www.MRC.org.