[UPDATE at end of post: Cooper responds, via Politico.]

CNN advertises Cooper's regular segment, "Keeping Them Honest," with the question: "Who's Anderson keeping honest tonight?" Apparently, CNN and Cooper find Republicans are much more dishonest. Since July, a review of "Keeping Them Honest" segments found 24 reports tagging the Republicans with dishonesty, compared with just three for Democrats – a ratio of eight to one.

In a review of programs from January 1 through October 14, Cooper's show (with occasional guest hosts) has aired 164 of these "Keeping Them Honest" reports, and 80 have focused on political issues involving the two major parties, Republican and Democrat, or the two prevailing political movements, liberal and conservative. Of those political reports, Cooper focused exclusively on Republicans or conservatives 45 times, compared to just 13 for the Democrats or liberals, although 22 of the reports hit both sides.

The rest of the "Keeping Them Honest" reports, 84 in number, either didn't pertain to American politics or focused on a nebulous political group that was neither liberal nor conservative. Topics included affairs in the Middle East like the Arab Spring and the Libyan government, domestic stories like the Casey Anthony trial, and disasters, like the nuclear plant troubles in Japan.

Fourteen segments covered events in Syria, and 12 more centered on matters in Libya. So there was one more "Keeping Them Honest" report on deception by the Syrian dictatorship than there were reports on Democrats (13). 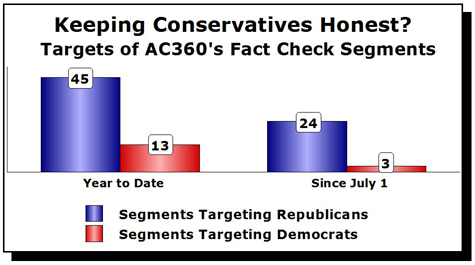 Cooper's "Keeping them Honest" segments have targeted Republicans and conservatives at all levels of power, including the presidential candidates, congressional Republicans, and even state and local officials. Yet Cooper's nightly fact-checking has been far lighter on the President and administration that's currently in power, providing little coverage of the ongoing Solyndra scandal or other administration foibles.

Cooper reported once on Solyndra on September 14, and then never ran another "Keeping Them Honest" segment about it. In contrast, Cooper devoted no less than five of these reports to updating previous segments he had done hitting Republican presidential candidate Michele Bachmann.

In addition, while Cooper devoted more than a few reports hitting both parties in Congress, he also used five reports since July 1 to hit Republicans in the House and Senate. None of his segments in that time period targeted only the Democrats in Congress.

One of the segments targeted conservative Republicans in particular. On September 22, Cooper claimed that demanding spending-cut offsets for Hurricane Irene spending marked the "first time ever" someone had used a hurricane as a "political wedge."

"Conservative Republicans voted against the C.R., or Continuing Resolution, because they said there weren't enough spending cuts to offset the $3.6 billion in disaster relief money," Cooper declared. "Now you can decide for yourself if you think funds for disaster relief for agencies like FEMA should only be available if they're offset by spending cuts elsewhere. This country is in some pretty tough straits for sure, but this is the first time ever, ever, that funding for people affected by things like tornadoes, flood, hurricanes, fires, you name it, have been used as a political wedge."

Not only has Cooper's "dishonest" meter been pointed at Republicans by 24 to 3, but 17 of the 24 stories critical of Republicans focused exclusively on GOP presidential candidates. Since July 1, three "Keeping Them Honest" segments have targeted President Obama. In that same time frame, Cooper has offered seven critiques of Bachmann. In 2011, Bachmann was targeted 12 times - five more than the President. By comparison, there have been four on Rick Perry and three on Mitt Romney.

In just the past two weeks, Cooper has also run two critical segments on Herman Cain, whose poll numbers have risen dramatically in the last month. Cooper even admitted that he was focusing on Cain because of his newfound popularity.

"We are taking a closer look tonight because Republican voters have made him [Cain] a leading contender for the presidential nominee – or nomination I should say," Cooper explained on his October 6 show, adding that his surge in the polls was "a sign that Herman Cain is no longer a voice on the fringe." Cooper said of Cain's statements that "Some are contradicted by facts, some seem barely tethered to reality."

Everyone expects the media to vet presidential candidates and provide their audience with a clear and critical look at a candidate's background, political beliefs, and past statements. But Cooper's record suggests he feels a much more glaring need to scrutinize Republican candidates and even provide follow-up stories to their "scandals."

Taking It Easy on the Democrats

Even though Cooper offered 13 "Keeping Them Honest" segments on the Democrats, four of them were devoted to Congressman Anthony Weiner's Twitter scandal over a few days, more than Obama received in over three months.

And, while Cooper never hit a Republican from the right, he did targeted Obama from the left. On the June 21 edition of AC360, Cooper scrutinized the President's position on gay marriage over the years – for it in the 1990s, against it when he hit national politics. He asked what Obama really believed and if his current opposition was just political calculation. He cited Obama spokesmen being questioned at the far-left Netroots Nation convention and in the White House briefing room by a reporter for the gay Washington Blade newspaper. Cooper asked 'human rights activist' Cleve Jones: "Does the Democratic Party take gay Americans for granted, feeling that, well, look, they're not going to go to the Republican Party?"

For instance, on January 19 Anderson Cooper began his show with a "Keeping Them Honest" story of Democratic Congressman Steve Cohen from Tennessee comparing Republicans to Nazis. Later in that same hour, he followed-up a story from the previous night on a Florida GOP representative who wanted to make it illegal for pediatricians to ask the parents of their patients what Cooper called "one simple question. And the question is, is there a gun in your house?"

On September 14, Cooper led his show with a follow-up segment criticizing Rep. Michele Bachmann (R-Minn.). Only later in his show did he address the Obama administration's Solyndra scandal. That segment was also the only "Keeping Them Honest" story he did on the Solyndra scandal.

Anderson Cooper prides himself on holding powerful figures accountable for their words and actions. He brags of his fairness in trying to elicit answers to basic questions. The recent record shows he hasn't offered Republicans a fair shake.

KEACH HAGEY: "The Media Research Center is just out with a report that finds that your segment "Keeping them Honest" tends to target Republicans far more often than Democrats – 24 Republicans since July, compared to 3 Democrats, a factor of 8-to-1. Why?"

ANDERSON COOPER: "I think we are looking more closely at a Republican field that has a number of candidates. There's a lot more to talk about with nine different Republican candidates out there. If it was a Democratic primary, we'd focus on Democrats. And there are certainly plenty of times when we've focused on President Obama or the Congressional Black Caucus.
I don't think it's accurate to say that we are just focusing on Republicans, but there is a very heated and very interesting Republican primary going on, where you have a number of Republican candidates making statements. As you get more into the general election, the focus will change."