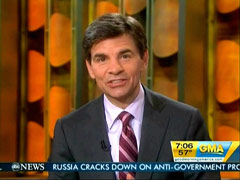 The GOP presidential candidates, at the upcoming ABC News debate in Iowa, should brace themselves to be splattered with tough questions from the left from moderator George Stephanopoulos. The good news for them is that most should be well-prepared for the left-leaning sliders, as many have already been subjected to Stephanopoulos's liberal questioning on Good Morning America. In 20 interview segments this year with the GOP candidates, totaling nearly two hours (110 minutes), an MRC review has documented Stephanopoulos has consistently pressed his guests from the left. Of questions with an ideological bent 75 percent (36) were from the left with just 25 percent (12) of them coming from the right.

When current GOP frontrunner Newt Gingrich showed up on the January 18 edition of Good Morning America, Stephanopoulos prodded the former Speaker of the House if he was prepared to put 129 million Americans at "risk" with his opposition to Obamacare.

STEPHANOPOULOS: "A new study being released by the Department of Health and Human Services that says up to 129 million Americans, half the non-elderly population, could have health problems that could lead insurers to either raise prices or deny coverage. If President Obama's reform is repealed, they say that's going to put these people at risk. Are you willing to take that risk for the 129 million Americans?"

On the April 20 Good Morning America, Stephanopoulos wasted little time in hitting Minnesota Congresswoman Michele Bachmann with the attack line that Republicans only care about the wealthy:

STEPHANOPOULOS: "Well, let's talk about the poll numbers, just out this morning. That seems to be very strong support for President Obama's position in this budget fight and a rebuke of the House Republican position."

BACHMANN: "I think if you look at those numbers, that would be accurate. But I don't think that totally reflects where the American people are coming from. First of all, if we tax 100 percent of what everyone made who make $250,000 or more, that would that- everything they made- that would get us about six months'-"

STEPHANOPOULOS: "But every bit helps, doesn't it?"

STEPHANOPOULOS: "You say that everyone needs to be involved. And I think that's reflected also in those numbers. A lot of Americans look at those numbers and say it's wrong for seniors who rely on Medicare to get cuts when wealthy people get tax cuts extended." 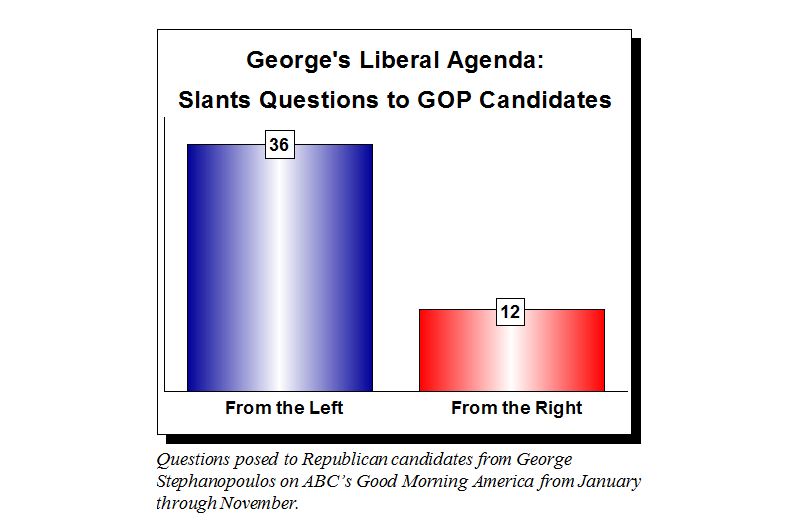 Stephanopoulos portrayed another GOP candidate, Ron Paul, as an uncompassionate villain of flood victims when he passed along an audience viewer's question on the May 13 edition of Good Morning America.

STEPHANOPOULOS: "Let me turn to some issues here at home. Celia from Springfield, Ohio wants to test how just how far your libertarian principles take you. She asks, 'Do you think everyone should just be responsible for themselves and if a flood washes your house away, no FEMA? Sink or swim?'"

On the November 30 Good Morning America, Stephanopoulos actually gloated that his interview with a woman who claimed to have had an affair with GOP candidate Herman Cain could "spell the end" his candidacy. Stephanopoulos's unseemly gratification in Cain's troubles wasn't surprising given how he treated his guest on the October 12 Good Morning America, when he claimed that his 9-9-9 tax plan was "gonna be a huge hit to Americans who are hurting right now."

STEPHANOPOULOS: "Your 9-9-9 plan, scrap the tax code, replace it with a 9% income tax, 9% corporate tax, 9% sales tax, got hit by everybody on the stage last night. And, and one of the most striking moments, when they panned out to the crowd and asked about the 9-9-9 tax, not a single person raised their hand in support. And I wonder if that's because, you know, when people look at the nine cents sales tax, you're gonna spend another nine cents every time they spend a dollar. That's gonna be a huge hit to Americans who are hurting right now, isn't it?...A lot of independent analysts have looked at it, have looked at this plan as well, and they say that this would be a huge tax cut for the wealthiest Americans, a real tax increase for poor and middle class Americans, and it's gonna increase the deficit."

Apart from questions tilted ideologically to the left, Stephanopoulos used his interviews to play up the Republican candidates' weaknesses and foibles. While he actually asked Mitt Romney, on the February 1 Good Morning America, a few questions from the right he did so to underline his chief weakness among Republican voters.

STEPHANOPOULOS: "Even Karl Rove, President Bush's former advisor, has said that unless you find a way- that the number one challenge to you getting the nomination in the Republican Party is your support for this individual mandate...You not going to apologize for the individual mandate?" 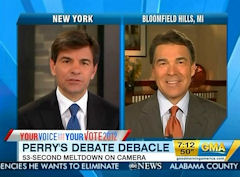 When Texas Governor Rick Perry showed up on the November 10 Good Morning America to talk about his brain freeze debate moment, Stephanopoulos used the occasion to pester Perry about leaving the race right then and there:

STEPHANOPOULOS: "Larry Sabato, presidential scholar already calling this the worst moment in modern primary debates. You've got a host of Republican operatives out overnight saying this is a death blow to your campaign."

On the June 27 Good Morning America, Stephanopoulos scolded Bachmann about the accuracy of her statements: "As you make progress in this campaign, everything you say is going to get more scrutiny. And the Pulitzer Prize-winning website Politifact has said you have the worst record of making false statements of any of the leading contenders."

Stephanopoulos then used his airtime to dispute Bachmann's statement that the Founding Fathers "worked tirelessly" to end slavery: "Now, with respect, Congresswoman, that's just not true. Many of them, including Jefferson and Washington, were actually slave holders. And slavery didn't end until the Civil War."

In contrast, Barack Obama got a much different treatment when showed up on the October 4 Good Morning America. Stephanopoulos relayed to his viewers that: "The President says the best piece of advice he got from Michelle: that the mark of success comes from having happy and loving children," and then later asked Obama: "How do you protect them, this time around, when everybody's saying all these bad things about you?"

Stephanopoulos did manage to ask some ideological questions of the President - but they were from the left. On the April 15 edition of Good Morning America Stephanopoulos hit Obama with this question from Louise Ross of Chester, New Hampshire: "Why not release at least some of the oil in our reserves before gas reaches $5 a gallon. If that's a rainy day fund, it's pouring out. Give us a break. That's what it's there for."

Then, in October, he similarly passed along a viewer's plea for the President to tamper with the free market: "More than 40,000 questions came in online for the President, most expressing anxiety and anger about the economy, including outrage at Bank of America's $5 debit card fee. Vicki Menkel wrote, 'Those are the types of things government should get involved in and put a stop to.' [to Obama] Can you put a stop to that?...Can you stop this service charge?''

Viewers of a Republican debate don't expect softball questions to be thrown at the participants but they would hope any tough questions came mostly from the right. However, as his recent interviews with GOP candidates on Good Morning America indicate, that is a task the former Democratic White House spinner to Bill Clinton seems unable or unwilling to handle.