The week of June 16-June 24, 2012 has been designated by the homosexual community as Gay Pride Week, during which LGBT people take pride in their triumphs over “violence and discrimination against gay, lesbian, and transgendered individuals.” 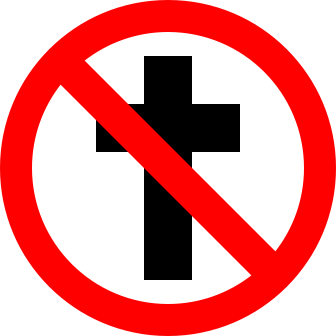 Funny, but they’re not making much noise about using government to discriminate in favor of their lifestyle. One Canadian activist even declared: “We’ll only take away charitable status from the buildings where the priests live and where the people pray.”

Liberals decry discrimination, real or perceived, against homosexuals; ABC even set up a sting operation on camera in order to “expose” anti-gay prejudice. But they have no problem with government discrimination in favor of the gay agenda, complaining that “needy children” will suffer because the Church refuses to cave into the government on the issue of gay adoption and that a Christian business refusing to host a lesbian wedding reception was “poisoned by homophobia.”

The self-proclaimed opponents of bigotry on the left have no problem with discrimination they happen to agree with.

Governments in are forcing Christian-run businesses to actively accommodate gay couples and promote gay causes, or face fines or prosecution. The National Review’s Ian Tuttle recently provided a good overview of the numerous examples of pro-gay discrimination in .

In , a photography studio was sued by a lesbian couple, because its owner refused to photograph their “commitment ceremony.” Studio owner Elaine Huguenin, cited her Christian faith as the reason she wouldn’t do the job.

In a May 31, 2012, decision, Judge Tim Garcia, writing for the New Mexico Court of Appeals, ruled in favor of the lesbian couple, arguing that the court “requires Elane Photography merely to offer its photography services without discrimination against any member of a protected class.” Since Garcia ruled that “Sexual orientation, however, is protected,” the photography studio was fined more than $6,500.

Libertarian magazine Reason, which supports gay marriage, asked the obvious question: why force someone who opposes your lifestyle to photograph you in the first place?

The answer seems to be that gay activists seek to force Christian companies to actively support their lifestyle. The Gay and Lesbian Services Organization (GLSO) of . , filed a discrimination complaint in March 2012 against a Christian T-shirt manufacturer, called Hands On, for refusing to print apparel for an upcoming LGBT pride festival. The owner of the company justified his decision by citing its religious beliefs, declaring in an op-ed: “I decided to pass on the opportunity because, as a Christian owner, I cannot in good conscience endorse groups or events that run counter to my convictions”

Hands On found another company that promised to do the same work for the same price; this gesture did not pacify the GLSO.

The ACLU sued a inn owned by a Catholic couple, because the inn refused to host a lesbian couple’s wedding in 2011. The owners declared on their Facebook page: “The Wildflower Inn is a small family owned and operated country inn. We are a devout practicing Catholic family who believes in the sanctity of marriage between one man and one woman. We have never refused rooms or dining or employment to gays or lesbians.”

Such instances of pro-gay (or anti-Christian) coercion have been celebrated by the left. Think Progress slammed the Vermont inn, and inveighed that the T-shirt incident was “openly discriminating against gay people,” with the inflammatory title: “Kentucky T-shirt Controversy Reveals Conservative Intent to Discriminate and Stigmatize.” The Daily Kos complained that the Wildflower Inn was “poisoned by homophobia.”

One company that merely donated to Christian groups supporting traditional marriage sparked calls for boycotts. Chick-fil-A came under fire at numerous universities in March 2012 for donated money to Christian organizations that “have anti-gay agendas.” has barred the firm from its campus, declaring: “We are proud of the decision that affirms our university's commitment to be an inclusive, diverse community that is respectful of all.”

Respectful of all who agree with them, of course.

Gawker called for a boycott of the restaurant: “If you'd really like to support gays and lesbians in a world lousy with Chick-fil-As, how about this tactic instead: From now on, don't f*cking eat at Chick-fil-A if you are a person who believes gays are equal to you and deserving of equal treatment under the law. No equivocating and no buying back karma with pity donations to gay-rights groups. Simply avoid the chain for as long as it upholds its homophobic ties.”

Left-wing outlets have lazily equated sexual orientation with active support for the gay lifestyle. But the owners of the Wildfower Inn and Hands On have both made clear that they have served gay customers without incident.

It is clearly illegal and wrong to refuse services because someone “looks” gay or admits same-sex attraction. It is another matter entirely for owners to refuse services to a group that actively supports behavior that the owners consider to be morally reprehensible or sinful. The situation is analogous to a conservative-owned company refusing to print Black Panther T-shirts – the company would be “discriminating” on the basis of politics, not of race.

Pro-gay discrimination has not been limited to government targeting of individual businesses; the Catholic Church has also been forced to discontinue charitable work, rather than be forced to approve the gay lifestyle.

In multiple instances, state and local governments have mandated that adoption agencies consider homosexual couples as potential adoptive partners, and refused to grant exemptions to this policy for religious-affiliated charities. Because the Catholic Church refuses to alter its stance on homosexual activities, governments have discontinued funding church-affiliated charities, in several cases forcing those charities to close.

The church believes that homosexual behavior is sinful; by considering homosexual couples as potential adoptive partners, it would be endorsing relationships it considers to be inherently wrong.

Rather than violate its doctrines, the Catholic Church has shut down social services on numerous occasions, most recently in in 2011. Laurie Goodstein of the New York Times reported on the controversy: “Roman Catholic bishops in Illinois have shuttered most of the Catholic Charities affiliates in the state rather than comply with a new requirement that says they must consider same-sex couples as potential foster-care and adoptive parents if they want to receive state money.”

In 2006, the Church shut down adoption services in rather than “comply with a state law requiring no discrimination against gay and lesbian couples who seek to adopt.”

In 2010, Washington, D.C., Catholic Charities also shut down its adoption program, because, as the gay newspaper Washington Blade reported, “Catholic Charities, the charitable arm of the Catholic Archdiocese of Washington, announced this week that it has ended its city contract to provide foster care and adoption services for D.C. residents, saying it could not comply with rules requiring that it place children with same-sex couples.”

DC Catholic Charities was also forced to restructure its health benefits system; it dropped coverage for spouses of employees, rather than be forced to offer “benefits to same-sex partners of its workers.”

The left cheered on efforts to defund Catholic Charities. The far left Daily Kos uncorked one of its typical unhinged rants, demanding a stop to “government funding of Catholic plutocrats.” E.J. Graff of the American Prospect wrote that “The bishops are making a ruckus because the "don't ask, don't tell" era of child placement has come to an end. Who suffers? Needy children.”

Governments abroad are further along in silencing and undercutting opponents of the gay agenda.

has proven especially intolerant of opposition to homosexuals. In a June 5, 2012, National Review article, Michael Coren explained that “definitive figures are almost impossible to state, but it’s estimated that, in less than five years, there have been between 200 and 300 proceedings — in courts, human-rights commissions, and employment boards — against critics and opponents of same-sex marriage.” He quoted one activist, who declared: “We’ll only take away charitable status from the buildings where the priests live and where the people pray.”

Conservative writer Mark Steyn has also observed the coercive tendencies of the Canadian authorities, writing: “The Rev. Stephen Boissoin was convicted of the heinous crime of writing a homophobic letter to his local newspaper and was sentenced by Lori Andreachuk, 's "human rights" commissar, to a lifetime prohibition on uttering anything "disparaging" about homosexuality ever again in sermons, in newspapers, on radio-or in private emails. Note that legal concept: not "illegal" or "hateful," but merely “disparaging.”

This type of enforced tolerance is exemplified in Bill 13, an act passed in June 2012 by the Legislative Assembly of Ontario which declares that “students need to be equipped with the knowledge, skills, attitude and values to engage the world and others critically, which means developing a critical consciousness that allows them to take action on making their schools and communities more equitable and inclusive for all people, including LGBTTIQ (lesbian, gay, bisexual, transgender, transsexual, two-spirited, intersex, queer and questioning) people.”

In practice, that means the forced establishment of Gay-Straight Alliance (GSA) clubs, even in Catholic schools. Canadian gay outlet Xtra! quoted GSA Coalition lawyer Doug Elliott: “If you’re not complying with the law, then we’re going to take you to court. It’s that simple.”

European governments too are aggressively abetting gay activists. In , Prime Minister David Cameron declared that the government should sanction gay marriages, and his ministers have gone farther, arguing that gay marriages could take place in churches. Religious leaders of the Church of England have warned that the church could be forced to stop performing weddings on behalf of the state if gay marriage is legalized.

In , the government has gone farther, mandating that the state Church of Denmark allow same-sex weddings. (An annex to the bill says that pastors do not have to officiate at marriages, if they have personal objections to them. The bishop, however, must provide a replacement.)

The upshot is that progressive nations are effectively dividing churches by enforcing church-related weddings; progressive pastors will be placed in opposition to more traditional-minded pastors within churches.

It is one thing for media outlets to argue that homosexuals should have the right to marry, or that those who oppose gay marriage are bigots. But it is quite another thing for governments to criminalize refusal to actively support a particular lifestyle one disagrees with, or to mandate support of a “protected class.”