You’d think the largest legal action in American history in defense of religious liberty would be a major news story. But ABC, CBS, and NBC don’t judge news events by their inherent importance as relates to the future of our freedoms. They deliver the news according to a simple formula: Does it, or doesn’t it, advance the re-election of Barack Obama?

On May 21, 43 Catholic dioceses and organizations sued the Obama administration over its ridiculously narrow idea of how a “religious institution” can be defined under their ObamaCare law. Never has the Catholic Church – or any order, for that matter – undertaken something of this magnitude. It’s truly jaw-dropping that ABC and NBC completely ignored this action on their evening newscasts, while “CBS Evening News” devoted just 19 seconds to this historic event.

No, let’s be blunt: They spiked the news. 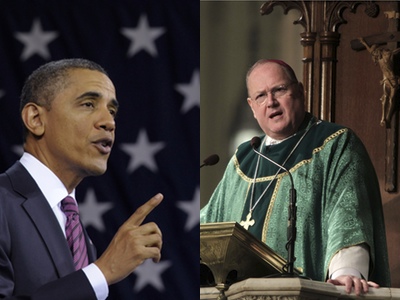 This is the worst example of shameless bias by omission I have seen in the quarter-century history of the Media Research Center. We recall the Chinese communists withholding from its citizenry for 20 years the news that the U.S. had landed on the moon, because it reflected poorly on their government. Never, never would the U.S. “news” media behave thusly.

This is not an honest mistake. It was not an editorial oversight by the broadcast networks. It did not occur too late for the evening deadline. This was a deliberate and insidious withholding of national news to protect the “Chosen One” who ABC, CBS and NBC have worked so hard to elect and for whom they are now abusing their journalistic influence. Even when CBS mentioned  the suit ever-so-briefly, like so many others, they deliberately distorted the issue by framing it as a contraception lawsuit when it is much broader, a religious freedom issue – and they know it.

This should be seen as a very dark cloud on Obama’s political horizon. The Catholic Church, with 60 million Americans describing themselves as Catholic, has unleashed legal Armageddon on the administration, promising “we will not comply” with a health law that strips Catholics of their religious liberty. If this isn't “news,” then there's no such thing as news.

This should be leading newscasts and the subject of special, in-depth reports. So what trumped this story? ABC led their evening broadcast and devoted an incredible three minutes and 30 seconds to the sentencing of the Rutgers student who spied on his gay roommate with a web camera. NBC aired an entire story on a lunar eclipse. Both CBS and NBC devoted their first three and a half minutes to prostate-cancer screening.

Catholic taxpayers who help fund National Public Radio were also ignored on the evening newscast with that sad joke of a title – “All Things Considered.”

If only some deceased priest had been accused of sexual improprieties in 1953…then Catholics would be seen as newsworthy. These “news” operations can’t argue these are more important stories than the loss of religious freedom in America.

The print press isn't much better. For the Washington Post, there was a little one-column story buried on page A6. That fishwrap known as USA Today had a really tiny headline and 128-word item at the very bottom of A2. The New York Times had a perfunctory 419-word dispatch on page A17.

Two pages later, the Times defined as “news” what it prefers to report on Catholics: “2 Philadelphia Priests Punished in Sexual Abuse Cases.” The paper noted one priest has been suspended from ministry for two years and the other had been placed on leave in December based on abuse that occurred about 40 years ago. This wasn’t really “news” as a current matter, but this is always and everywhere the bigoted narrative the Times prefers to perpetuate.

Cardinal Timothy Dolan of New York, the head of the U.S. Conference of Catholic Bishops used the word “horror” to describe what Team Obama is mandating. On the only broadcast show to give Catholics some coverage, CBS This Morning anchor Charlie Rose asked Dolan if the White House misled him on this issue. Dolan began by saying he hesitated to question the president’s sincerity – even though anyone who heard Obama’s 2009 commencement speech at Notre Dame about “honoring the conscience” of his opponents on abortion has proven he is completely insincere.

The cardinal said “I worry, Charlie, that members of his administration might not particularly understand our horror at the restrictive nature of this exemption that they're giving us, that for the first time that we can remember, a bureau of the federal government seems to be radically intruding into the internal definition of what a church is. We can't seem to get that across.”

He’s not finding much help getting anything across from those supposed “mediators” of the national press corps.