Those who attack the likes of Rush Limbaugh, Sean Hannity, and Mark Levin – as too conservative, too vitriolic, or simply unhinged – have that right, even if, as is so often the case, they rely on others rather than listen to the shows themselves. That’s what liberals do.

There are pretenders to the throne of conservative talk radio who claim to be so much less “poisonous” and stupid than Limbaugh, Hannity, Levin et al – and travel the same character-assassination route. Congressman Mike Rogers told The New York Times he’s retiring in January to join Cumulus Radio for a national show because “I think there is room for a more productive, you-might-actually-learn-something kind of talk radio in the marketplace.” 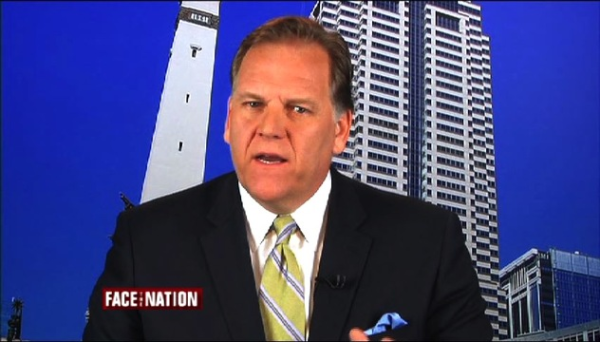 Rogers is such a genius he thinks you launch a career in conservative talk radio by pandering to The New York Times. The article begins with Rogers denouncing all those members of Congress “who would rather raise their profiles and get into the media” than pass legislation. Rogers is so dense he can’t see that he’s denouncing the very road he’s walking down.

Mark Leibovich of the Times described conservative talk radio as a set of “delirium bins,” nudging Rogers to add, “I’m a bit of a canary in a coal mine. And I am hoping I don’t choke on fumes at the bottom of the shaft.” So: talk radio is a dark cave, full of noxious gases. That attitude surely will win audiences over.

Rogers also promoted himself to the Associated Press with a similar line of trash-talking malarkey. Unlike Rush, Sean, and Mark, he will be “a productive conservative host, with smart controversy, smart debate.”

What Rogers doesn’t see is that he isn’t just insulting talk show hosts. This “productive conservative host” is insulting his audience. They are morons, knuckle-draggers unable to think for themselves, unable to be smart. Yes, this is a man who will find a receptive audience on talk radio.

Rogers is delusional. He even agreed with the Lansing News back in Michigan that his radio show could make “a powerful launching pad for a White House bid.” He insisted: "It worked for Ronald Reagan." Earth to Rogers: Reagan didn’t become president by treating his audience like under-educated dolts.

Welcome to the formula of that talk-radio juggernaut known as Joe Scarborough. When his radio show failed, Cumulus Radio suggested it would be back after a “brief hiatus.” That was in 2010. Perhaps Rogers is Scarborough’s doppelganger – a former congressman who arrogantly attacks his former colleagues in Congress, and then all his new competitors on the AM dial, and then wonders why his friends have walked away.

Cumulus is obsessed with finding a “reasonable” host to compete with Team Rush. They tried Scarborough, and failed. They tried Mike Huckabee, and failed. They tried Geraldo Rivera in a few major markets, and that’s tanked. Then, for some weird reason, they replaced Hannity’s show with the embarrassing Michael Savage – who is exactly the kind of unproductive screamer that Rogers thinks he’s going to replace. His numbers, too, are dropping.

Others have tried displacing conservative talk show hosts with liberals like Mario Cuomo, Doug Wilder, Jim Hightower, and Ron Reagan. They have one thing in common: All were fired.

Limbaugh has been the king for decades now. He is a broadcasting legend. Hannity and Levin also have millions of loyal fans. But the liberals and the “reasonable” people just don’t want to acknowledge reality. In this business, it’s the market that decides. And this market has embraced Limbaugh, Hannity, and Levin as emphatically as it has rejected the pretenders.

America should thank her lucky stars for these radio stars that Rogers disparages. They have done more than anyone to save this country and its tradition of liberty.

And Rogers? He’ll be just another failure.