But there’s a more dramatic contrast. Film critics are supposed to judge art, but their liberal politics are smeared all over their reviews. Metacritic.com collects and analyzes movie reviews. “Obvious Child” drew a high Metacritic.com score of 75 (out of 100). For D’Souza’s “America,” it was a ridiculously low score of 14. 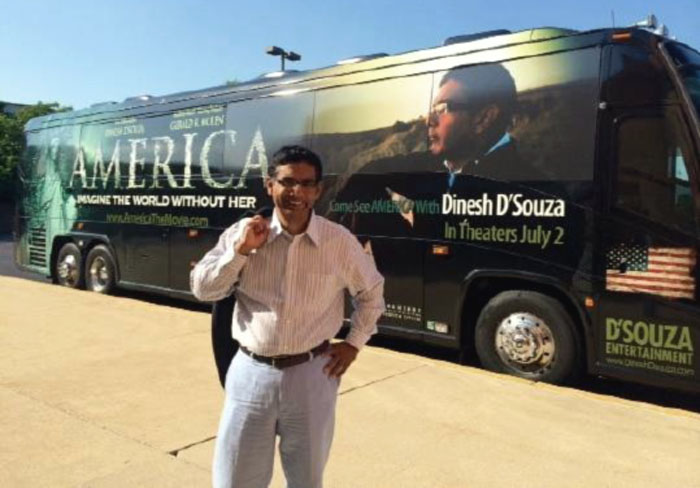 The Washington Post gushed over Moore’s prankumentary. "Its trajectory is guided with pinpoint accuracy," wrote Desson Thomson, and it "obviously skews facts to its own advantage, but that's what the game is all about. What counts is the emotional power of Moore's persuasion."

“Fahrenheit” was loaded with bizarre and unproven charges against Bush, most offensively suggesting the Bush family and Osama bin Laden’s family were in cahoots over 9-11. Moore concluded the film with a conspiracy theory: “In principle, the war effort is always planned to keep society on the brink of starvation. The war is waged by the ruling group against its own subjects.” All of that was just fine.

But when it came to the new D’Souza film, the same newspaper’s Mark Jenkins suddenly found perceived fact-skewing and one-sidedness to be just awful. “‘America’ is less successful as a debate, since it isn’t one. D’Souza controls the conversation, and thus goes unchallenged when he tries to make real-world points with make-believe scenarios.”

Then there’s The New York Times. In 2004, Dana Stevens wrote that while the facts of “Fahrenheit 911" could be debated, ”it should first of all be appreciated as a high-spirited and unruly exercise in democratic self-expression.” As for D’Souza’s self-expression? The Times critics have yet to bother reviewing the movie.

The movie’s only questionable note is the egocentric turn at the end as D’Souza shows himself in handcuffs and notes his own prosecution for making $20,000 in straw donations in a U.S. Senate race in New York. D’Souza has a point about selective prosecution under Obama, but it loses its punch when the accuser has admitted his guilt.

But overall, D’Souza’s approach is far more serious and substantive than Michael Moore’s conspiratorial claptrap. Moore’s idea of a “debate” was mocking Bush’s golf game and reading “My Pet Goat” to schoolchildren when the news of 9-11 arrived, or showing Paul Wolfowitz as he combed down his hair with his own spit. D’Souza deals respectfully, even gently with radical leftists from Noam Chomsky to Ward Churchill to Michael Eric Dyson. Churchill, for example, thinks a nuclear strike on America might be justified.

D’Souza underlines their argument: “Today that notion of the essential goodness of America is under attack, replaced by another story in which theft and plunder are seen as the defining features of American history.” D’Souza argues that the “conquest ethic” is the global norm, and that America is unique in trying to depart from it for higher ideals. He includes a rousing clip at the end with Irish rock star Bono, who hails the United States as “a great idea.”

For those who’ve felt the leftist American-greed-and-imperialism narrative shoved down their throats, this movie is a welcome rebuttal. The fact that liberal film critics can’t stand watching it makes it only more attractive.