The 'Elusive' Truth About Kagan 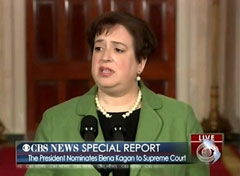 It's not cute when reporters play dumb. Last year, when Barack Obama nominated Sonia Sotomayor for the Supreme Court, CBS anchor Katie Couric said labeling her "won't be easy." CBS reporter Wyatt Andrews found "no clear ideology" in her public record. This week, the Washington Post embarrassed themselves with a front-page story claiming "Obama has not chosen outspoken liberals in either of his first two opportunities to influence the makeup of the court."

That ridiculous sentence collides with a June 8 report by liberal Los Angeles Times legal reporter David Savage. "The early returns are in, and Justice Sonia Sotomayor is proving herself to be a reliable liberal vote on the Supreme Court. Cases this year on campaign speech, religion, juvenile crime, federal power and Miranda warnings resulted in an ideological split among the justices, and on every occasion, Sotomayor joined the liberal bloc."

Now match that record with what the liberal media claimed about Sotomayor. "You know, for a Democrat, she has a pretty conservative record," NPR reporter Nina Totenberg announced on PBS's "Charlie Rose" show last year. "In fact, on a lot of criminal law issues, you could say that she's more conservative than some members of the Supreme Court, including Justice Scalia."

If Totenberg sold shoddy diet pills that fraudulently, she'd be a red-hot case for the Federal Trade Commission.

So why should anyone believe the media are telling the truth now when they suggest Elena Kagan cannot be called liberal? Kagan's views are "elusive," the media chant in unison. They all tried to evade Kagan's vivid writing as a college student in the Daily Princetonian in 1980, about how she cried and got drunk when Ronald Reagan won and "ultraconservative" Al D'Amato defeated her candidate, ultraliberal Democrat Liz Holtzman.

She wished that "our emotion-packed conclusion that the world had gone mad, that liberalism was dead and that there was no longer any place for the ideals we held or the beliefs we espoused" would be replaced by the hope that the Reagan era would be "marked by American disillusionment with conservative programs and solutions, and that a new, revitalized, perhaps more leftist left will once again come to the fore."

Unbelievably, our journalistic geniuses can read that and say Kagan's political views are "elusive."

In their deference to Obama, the networks barely mentioned Kagan for the six weeks between her nomination and her confirmation hearings. Conservative interest groups putting out complaints that she'd be a radical justice on abortion and "gay marriage" are not newsworthy, even though liberal interest groups ranting about "far right" Bush nominees were tenderly solicited by the same networks.

One TV reporter filed one story that broke the mold. On June 3, CBS legal reporter Jan Crawford said documents in Thurgood Marshall's papers in the Library of Congress showed that, "Kagan stood shoulder to shoulder with the liberal left, including on the most controversial issue Supreme Court nominees ever confront: abortion."

The White House was furious that Crawford would dare tell the truth about such a thing. "Their reaction has been to push back so strongly on allegations, as they would put it, that she's a liberal," she revealed. "Like there's something wrong with that, like it's a smear to say their nominee is a liberal."

When the hearings began, ranking Republican Sen. Jeff Sessions offered a devastating opening statement documenting Kagan's extreme liberalism. He ran through her college thesis on socialism that worried about socialism's demise, and her master's thesis praising the activism of the Earl Warren Court. He noted how she worked for the Michael Dukakis for President campaign, and took a leave as a law school professor to help Joe Biden get liberal Justice Ruth Ginsburg confirmed.

If that's ancient history, Sessions added that in 2005, Harvard Law School Dean Kagan joined three other leftist law school deans to write a letter in opposition to Sen. Lindsey Graham's amendment on determining who was an "enemy combatant" in the War on Terror. She compared Graham's amendment to the "fundamentally lawless" actions of "dictatorships."

The networks skipped those facts in brief, perfunctory news reports.

Liberal partisans expect the "objective" media to spout obvious lies that there are no liberals to be found in Obama's Supreme Court selections, that they have been far too "elusive" to be categorized. That is why Americans are turning away in droves: they're not finding the media's biases to be "elusive."