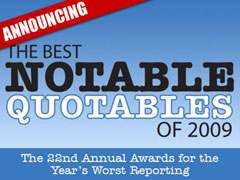 The winning quotes in the MRC's "Best Notable Quotables of 2009: The Twenty-Second Annual Awards for the Year's Worst Reporting." As announced in a CyberAlert Special last Monday, the awards issue was posted, with videos, on Monday, December 21, but following tradition, today, Tuesday, Wednesday and Thursday - the last weekdays of the year - MRC.org's BiasAlert and corresponding CyberAlert e-mail newsletter will run the winning quotes followed on succeeding days by the runners-up.

The page linked above also has links to download a PDF version or the text of the entire issue in MS Word, OpenOffice Writer or WordPerfect formats.

The Media Research Center's annual awards issue provides a compilation of the most outrageous and/or humorous news media quotes from 2009 (December 2008 through November 2009).

To determine this year's winners, a panel of 48 radio talk show hosts, magazine editors, columnists, editorial writers, and media observers each selected their choices for the first, second and third best quote from a slate of five to eight quotes in each category. First place selections were awarded three points, second place choices two points, with one point for the third place selections. Point totals are listed in the brackets at the end of the attribution for each quote. Each judge was also asked to choose a "Quote of the Year" denoting the most outrageous quote of 2009.

The MRC's Michelle Humphrey, Karen Topper and Kristine Lawrence distributed and counted the ballots, then produced the numerous audio and video clips that accompany the Web-posted version. Rich Noyes and Brent Baker assembled this issue and Brad Ash posted the entire package on the MRC's Web site. In addition to Rich and Brent, back in November Tim Graham and Geoffrey Dickens helped select the quotes for the ballot and think up category titles.

The list of the judges, who were generous with their time, is posted online and listed below after the winning quotes.

Now, the winning quotes in the 17 award categories (see the "Best Notable Quotables of 2009" pages for video clips of each quote):

The Coronation of the Messiah Award for Fawning Inaugural Coverage

"We know that wind can make a cold day feel colder, but can national pride make a freezing day feel warmer? It seems to be the case because regardless of the final crowd number estimates, never have so many people shivered so long with such joy. From above, even the seagulls must have been awed by the blanket of humanity."
- ABC's Bill Weir on World News, January 20. [66 points]


Master of His Domain Award for Obama Puffery

"The legislative achievements have been stupendous - the $789 billion stimulus bill, the budget plan that is still being hammered out (and may, ultimately, include the next landmark safety-net program, universal health insurance). There has also been a cascade of new policies to address the financial crisis - massive interventions in the housing and credit markets, a market-based plan to buy the toxic assets that many banks have on their books, a plan to bail out the auto industry and a strict new regulatory regime proposed for Wall Street. Obama has also completely overhauled foreign policy, from Cuba to Afghanistan. 'In a way, Obama's 100 days is even more dramatic than Roosevelt's,' says Elaine Kamarck of Harvard's Kennedy School of Government. 'Roosevelt only had to deal with a domestic crisis. Obama has had to overhaul foreign policy as well, including two wars. And that's really the secret of why this has seemed so spectacular.'"
- Time's Joe Klein in the magazine's May 4 cover story on Barack Obama's first 100 days as President. [100 points]

"The type of female that does like Rush is the same type of woman that falls in love with prisoners. You know what I mean? They like Richard Ramirez or - Squeaky Fromme is a good example. I think Charles Manson's - Eva Braun, Hitler's girlfriend. That is exactly the type of woman that responds really well to Rush. And there will be some Eva Brauns, Squeaky Frommes out there that will respond really well to this cattle call right now."
- Actress/activist Janeane Garofalo on MSNBC's Countdown with Keith Olbermann, February 26. [59 points]

"The Republicans lie! They want to see you dead! They'd rather make money off your dead corpse! They kind of like it when that woman has cancer and they don't have anything for her."
- Ed Schultz, host of MSNBC's The Ed Show, September 23. [57 points]


The Poison Tea Pot Award for Smearing the Anti-Obama Rabble

CNN analyst David Gergen: "Republicans are pretty much in disarray....They have not yet come up with a compelling alternative, one that has gained popular recognition. So-"
Anderson Cooper: "Teabagging. They've got teabagging."
Gergen: "Well, they've got the teabagging....[But] Republicans have got a way - they still haven't found their voice, Anderson. They're still - this happens to a minority party after it's lost a couple of bad elections, but they're searching for their voice."
Cooper: "It's hard to talk when you're teabagging."
- CNN's Anderson Cooper 360, April 14. "Teabagging" is a vulgar slang term for a certain variety of oral sex; Cooper later apologized. [65 points]

"Why not just nationalize the banks?...People are angry. There's so much taxpayer money going into the banks. Why shouldn't the government - why shouldn't you just fire the executives who wrecked these banks in the first place and tanked the world's financial system in the process?"
- ABC's Terry Moran interviewing President Obama for Nightline, February 10. [53 points]

"Mary Jo wasn't a right-wing talking point or a negative campaign slogan....We don't know how much Kennedy was affected by her death, or what she'd have thought about arguably being a catalyst for the most successful Senate career in history....[One wonders what] Mary Jo Kopechne would have had to say about Ted's death, and what she'd have thought of the life and career that are being (rightfully) heralded. Who knows - maybe she'd feel it was worth it."
- Discover magazine deputy web editor Melissa Lafsky, who formerly worked on the New York Times's Freakonomics blog, writing at the Huffington Post, August 27. [107 points]

CNN's Jack Cafferty: "Here's the question: 'Would you rather listen to a speech by Sarah Palin or a speech by Newt Gingrich?' Go to CNN - or would you rather just stick needles in your eyes? [Over loud laughter off-camera from a man other than Cafferty, presumably Blitzer] Go to CNN.com/CaffertyFile and you can post a comment on my blog. I forgot about the third option."
Anchor Wolf Blitzer: "What do you think, Jack? You want to listen to Palin or Gingrich deliver a speech?"
Cafferty: "I'm not interested in listening to either one of them."
- Exchange on CNN's The Situation Room, June 9, talking about Palin and Gingrich's appearance at a Republican fundraiser the previous evening. [53 points]

"Let me be precise here: Fox News peddles a fair amount of hateful crap. Some of it borders on sedition. Much of it is flat out untrue. But I don't understand why the White House would give such poisonous helium balloons as Glenn Beck and Sean Hannity the opportunity for still greater spasms of self-inflation by declaring war on Fox....The best antidote to their garbage is elegant, intelligent governance."
- Time's Joe Klein on the magazine's "Swampland" blog, October 23. [62 points]


Let Us Fluff Your Pillow Award for Obsequious Obama Interviews

"You're so confident, Mr. President, and so focused. Is your confidence ever shaken? Do you ever wake up and say, 'Damn, this is hard. Damn, I'm not going to get the things done I want to get done, and it's just too politicized to really get accomplished the big things I want to accomplish'?"
- CBS's Katie Couric in an exchange with Obama shown on The Early Show, July 22. [92 points]

"I like to say that, in some ways, Barack Obama is the first President since George Washington to be taking a step down into the Oval Office. I mean, from visionary leader of a giant movement, now he's got an executive position that he has to perform in, in a way."
- ABC Nightline co-anchor Terry Moran to Media Bistro's Steve Krakauer in a February 20 "Morning Media Menu" podcast. [82 points]


The Audacity of Dopes Award for Wackiest Analysis of the Year

"Reagan [at the 1984 D-Day commemoration] was all about America, and you talked about it. Obama is, 'We are above that now. We're not just parochial, we're not just chauvinistic, we're not just provincial. We stand for something.' I mean, in a way, Obama's standing above the country, above - above the world. He's sort of God. He's going to bring all different sides together."
- Newsweek's Evan Thomas to host Chris Matthews on MSNBC's Hardball, June 5. [79 points]


The Obamagasm Award for Seeing Coolness In Everything Obama Does

Correspondent John Harwood: "He had this fly that was persistently buzzing around him....He swatted his hand and he said, 'I got the sucker.' He threw it onto the ground. It was a, you know, Dirty Harry 'make my day' moment."...
MSNBC anchor David Shuster: "Amazing...An amazing interview....It never fails - great weather, rainbows, incredible speeches, and three-point basket. A fly and he nails it. Unbelievable. Unbelievable."
- Exchange on MSNBC after Harwood's CNBC interview with President Obama concluded, June 16. [76 points]

Correspondent Dawna Friesen: "Her husband is, of course, the big star of the show, but this is Michelle Obama's first foray on to the global stage as First Lady. And you can bet that her every move, her every fashion decision will be dissected and analyzed, especially when the couple go to meet the Queen. But she's got a lot of good will on her side."
Video of Michelle Obama as Andy Williams sings: "You're just too good to be true/Can't take my eyes off of you."
Friesen, as song continues playing in background: "Ask the British about Michelle Obama, and you'll hear a lot of what you hear in the States."
Woman on the street: "Oh, I think she's really cool. She's got a lot of really good styles. It makes a change from politicians' wives to look good."
Man on the street: "She looks supportive and that's what a man needs in life."
Second man: "I have been totally stunned at the awesome nature of Michelle Obama."...
Friesen: "Then there's those arms, the envy of a lot of British women...."
- NBC's Today, March 31. [66 points]

Actor Denis Leary: "I do have to say that I think that President Obama is the greatest President in the history of all of our Presidents, and that he can do no wrong in my book. So how's that for prejudice on the Democratic side?"...
Fill-in host Joy Behar: "What do you think of Obama's pick of Sotomayor?"
Leary: "Fantastic!"
Behar: "You love her?"
Leary: "Everything you ask me about President Obama I'm just going to say it's the greatest thing ever. I love the guy!"
- Exchange on CNN's Larry King Live, May 29. [53 points]


Quote of the Year

"Mary Jo wasn't a right-wing talking point or a negative campaign slogan....We don't know how much Kennedy was affected by her death, or what she'd have thought about arguably being a catalyst for the most successful Senate career in history....[One wonders what] Mary Jo Kopechne would have had to say about Ted's death, and what she'd have thought of the life and career that are being (rightfully) heralded. Who knows - maybe she'd feel it was worth it."
- Discover magazine deputy web editor Melissa Lafsky, who formerly worked on the New York Times's Freakonomics blog, writing at the Huffington Post, August 27.


■ The 48 judges, check the online listing for links to Web pages for each of them:

* Marvin Olasky, provost of The Kings College in New York City and Editor-in-Chief of World magazine

* Dan Rea, host of Nightside, on WBZ Radio in Boston

During 2009, we lost two dedicated judges who loyally completed their ballots each year. On January 4, Troy University journalism professor Chris Warden died at the age of 51. And on August 18, nationally-syndicated Chicago Sun-Times columnist and longtime friend of the MRC Robert Novak passed away at the age of 78.

In addition: After receiving his ballot this year, we were saddened to learn Fred Honsberger passed away on December 16.

■ Coming on Tuesday: The first runners-up.