On June 13, the CBS Evening News devoted a story by David Martin to the Afghanistan death count reaching 2,000, as Martin interviewed a mother of a fallen Marine. CBS was alone. There was no story last week on the Afghanistan death “milestone” on ABC, NBC, the PBS NewsHour – or even on the MSNBC programs found in Nexis, including Rachel “Our Military’s In a Perilous Drift” Maddow.

But the networks were all more aggressive when the 2,000 mark arrived in Iraq on October 25, 2005. The Big Three networks devoted 14 morning and evening news stories to the death toll from October 24 through the end of October, and another 24 anchor briefs or mentions. They used the number to spell “disaster for this White House.”

CBS offered five reports and ten additional briefs or mentions of the 2,000 figure. David Martin filed a sad story on the 2,000 mark in both wars, the only sign of consistency among the networks. As Brent Baker reported in 2005:

An overwhelming 79 percent of Iraqis, who risked their lives just over a week ago to cast their ballot, voted in favor of the nation's new constitution, but you'd have missed it if you sneezed during Tuesday's CBS Evening News or ABC's World News Tonight. 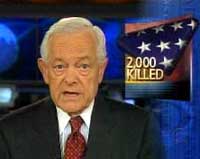 CBS anchor Bob Schieffer delivered only this single sentence -- "Iraq's government announced today that voters did approve the country's new constitution in this month's referendum" -- before moving on to a full story about the 2,000th death of U.S. servicemen in Iraq, a piece he could not resist introducing without adding this snide aside: "More than 90 percent of the 2,000 who died in the war have died since the President declared major combat was at an end in May 2003."

They've been working on this, trying to figure out how to get past the events of the last couple of months which have been really a disaster for this White House. The Hurricane Katrina failure, the failure of the Miers nomination, the landmark of the 2,000th US casualty in Iraq. All of these things have taken a toll, weighted this place down. There's a sense that nothing is happening, that the president is going nowhere.

ABC offered nothing to darken Obama’s day, but reported five stories and eight other briefs or mentions on the 2,000 count in Iraq. That’s not counting an entire edition of Nightline on October 25, 2005. Good Morning America anchor Diane Sawyer began on October 26: “This morning, a somber milestone. Another American dies in the war in Iraq. We have now lost 2,000 sons and daughters.”

If you're inclined to get all the bad news in your life out of the way at the same time, consider this week in the life of President Bush. His brother, Jeb, the governor of Florida, had to concede the state government didn't do all it could have or should have done to prepare for Hurricane Wilma. That can only remind people that this has been a bad hurricane season all-around, when it comes to government response. This was the week, of course, that the death toll of American servicemen and women in Iraq topped 2,000. Statistical markers like that are never a fair way of judging the legitimacy of a war but they seem to have an impact, nevertheless.

They have an impact – unless you just skip them completely when the Democrats are in the White House.

NBC reported nothing on the Afghanistan body count, but four stories and six other mentions of Iraq. On October 24, 2005, Today co-host Katie Couric looked ahead to the grim number:

All right, as if the White House didn't have enough trouble right now, Iraq is still looming. The two--it's going to be 2,000th--we're going to get up to the 2000th death of US servicemen and women in Iraq very soon. I think we're four away from that. Meanwhile, Brent Scowcroft gave some scathing criticism of the Bush administration in this week's New Yorker.

On the October 26 Nightly News, Brian Williams wanted to make sure the number was more depressing than it might seem: “We should quickly point out the number of Iraqis who have died since the US invasion is, of course, far higher than the 2,000 American death toll. The Associated Press is tonight quoting one source who says as many as 30,000 Iraqis may have died. Others say it is still higher.”

Days later, on the October 30 Nightly News, David Gregory was still spelling doom: “Criminal charges, a failed nomination to the Supreme Court and a grim milestone in Iraq, 2000 US soldiers killed in action. Perhaps the worst political week of the Bush presidency.”

PBS: On the NewsHour, Jim Lehrer announced: “U.S. deaths in Iraq passed the 2,000 mark today. The military announced two U.S. Marines were killed last week, and a soldier died of his wounds. That made a total of 2,000 Americans killed since the war began, according to the Associated Press. Figures from the Pentagon showed more than 15,000 have been wounded.”

Lehrer then broke down the numbers further in a segment with Tobias Naegele of the Military Times Media Group. Two days later, Mark Shields underlined: “We just passed 2,000 killed in Iraq this week, 90 percent killed of them have been killed since the president announced mission accomplished.”

But PBS offered no such story from Afghanistan.