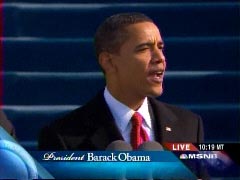 The Washington Times's Jennifer Harper picked up on a new study from the non-partisan Center for Media and Public Affairs showing President Obama getting much more flattering news coverage from ABC, CBS and NBC (46% positive vs. 54% negative) during his first year in office than did Presidents Reagan, Clinton and George W. Bush, all of whom received roughly three times more bad press than good from those same broadcast networks.

But one network did offer scrutiny roughly equal to that provided by the old networks in the past, according to CMPA: the Fox News Channel. Reviewing the first thirty minutes of FNC's Special Report with Bret Baier, CMPA found roughly three times more negative coverage of Obama (78%) vs. positive coverage (22%) during 2009. This compares to the broadcast networks doling out 74% bad press for Ronald Reagan in 1981 and 77% bad press for George W. Bush in 2001. In 1993, Bill Clinton fared better than his GOP counterparts (28% positive vs. 72% negative), but much worse than President Obama. (Chart below the jump).

As the MRC's Tim Graham noted in a just-released special report from MRC, Omitting for Obama, the three broadcast networks were routinely late in picking up on negative storylines about the Obama administration, and gave paltry attention to major scandals such as the radical affiliations of ex-White House aide Van Jones, ACORN, and the pro-communist musings of then-White House communications director Anita Dunn. Instead, those stories were brought to light by alternative news sources, such as Fox News, talk radio and the conservative blogosphere, and then only grudgingly covered by the old media.

The CMPA study seems to validate the same point, as only the coverage on the Fox News Channel matches the level of scrutiny faced by previous presidents in their first year. CMPA also discovered that Obama's level of good press was even higher at the New York Times (54% positive vs. 46% negative) and the newsmagazines, Time and Newsweek (53% positive, 47% negative). Adding the networks to the print outlets gave Obama an overall 49% positive, 51% negative press score, according to CMPA.

"Obama's balanced media coverage in 2009 was still about twice as positive as the coverage received by Bush and Reagan during comparable time periods," the study said.

Fox News was never in the Obama fan club, however. Only 22 percent of their stories on Mr. Obama were positive during the year, some of it quite pointed.

"The president's story does not make any sense," said Fox News correspondent Jim Angle on June 3.

"His quest to secure the 2016 Olympics for Chicago failed in spectacular fashion," commented Fox News' Bret Baier in October.

Relations between the network and the White House have been described as "a war" by many news analysts; the Obama administration is not shy about lobbing its own bombs at Fox by questioning its "point of view" as a news organization.

Full disclosure: I worked at CMPA until 1999, and helped the develop the methodology the Center uses for tallying good and bad press for presidents.

-Rich Noyes is Research Director at the Media Research Center.