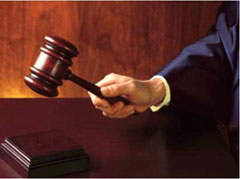 On Thursday, Louisiana Federal District Court Judge Martin Feldman found that the Obama Interior Department was in contempt of his ruling that the offshore oil drilling moratorium, imposed by the administration in 2010, was unconstitutional. After Feldman struck down the initial drilling ban, the Interior Department simply established a second ban that was virtually identical.

While the story was reported on Thursday by wire services like the Associated Press and picked up by frequently cited internet news sites like Politico and The Huffington Post, the television media, including ABC, NBC, CBS, and CNN, all ignored the story.

In his ruling, Judge Feldman forcefully admonished the administration's attempt to circumvent his 2010 decision: "Such dismissive conduct, viewed in tandem with the reimposition of a second blanket and substantively identical moratorium and in light of the national importance of this case, provide this Court with clear and convincing evidence of the government's contempt of this Court's preliminary injunction order."

As Politico further explained: "Gulf state lawmakers have criticized the Obama administration for stopping drilling last summer, and accuse Interior of continuing a 'de facto' ban on permits, saying it cost their states thousands of jobs."

Earlier in the week, the media provided scant and dismissive coverage of another court ruling against the Obama Administration, that of a federal judge in Florida who deemed ObamaCare to be unconstitutional. On Tuesday's Good Morning America, ABC's JuJu Chang downplayed the major challenge to the legislation: "...the Obama administration is expressing confidence that the new health care law will be upheld. It's vowing to appeal."

On Monday's CBS Evening News, fill-in anchor Harry Smith declared: "In the legal battle over President Obama's health care reform law, the score is now two to two. A federal judge in Florida is the latest to weigh in, ruling today the law is unconstitutional...A judge in Virginia issued a similar ruling in December, but two other courts have upheld the insurance mandate."

- Kyle Drennen is a news analyst at the Media Research Center. You can follow him on Twitter here.