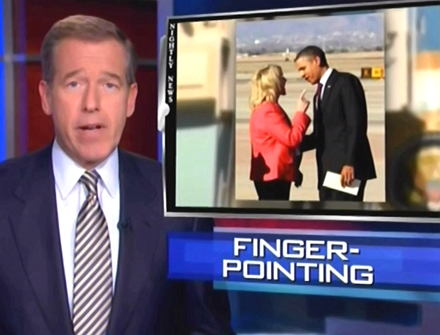 After cameras caught Arizona Governor Jan Brewer pointing her finger at President Obama during a discussion on an airport tarmac last week, NBC's Brian Williams acted appalled. "Who have you ever seen talking to the President like this?" Williams demanded to know on the January 26 Nightly News, later adding: "You don't see that often, or maybe ever."

But, as NewsBusters blogger Noel Shepherd discovered over the weekend, Brian Williams himself jabbed a finger towards then-President George W. Bush in an August 29, 2006 interview, as evidenced in footage shown on NBC's Today show the following morning.

That confrontation did not seem particularly acrimonious, but the picture looks incredibly similar to the Obama-Brewer confrontation - which demonstrates that images alone cannot always tell the entire story.

The exchange between Bush and Williams came as the then-President was talking about how the media endlessly analyze the decisions of a Commander-in-Chief: 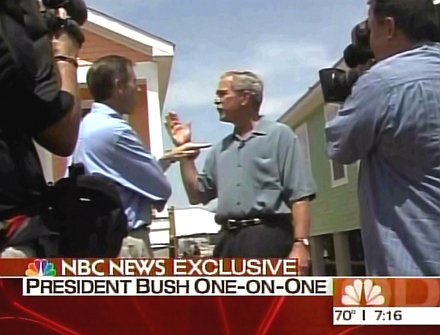 President GEORGE W. BUSH: The great thing about the presidency is you're totally exposed and people send a lot of-particularly if you're making decisions, and hard decisions, people spend a lot of time not only analyzing the decisions, they analyze the decision-maker, and I understand that. But a president must never let him get off-let that get him off track.
BRIAN WILLIAMS (pointing his finger at Bush): Even if you're frustrated that we're getting something wrong.
BUSH: You have to-you have to do what you think-if we're getting some things wrong we change it.
WILLIAMS: How have you been read wrong?
BUSH: Oh, I don't know if I've been read wrong. I mean, I frankly don't pay that much attention to it. I don't want to hurt people's feelings about....

At the time, MRC's Brent Baker noted the adversarial tone Williams brought to the interview, hitting Bush with the left-wing complaint that his response to Hurricane Katrina in New Orleans was impaired "because of your 'patrician' upbringing, that it's a class issue." Williams also asked Bush to admit to "moments of doubt that we fought the wrong war, that there's something wrong with the perception of America overseas."

But after Brewer was photographed pointing at President Obama, Williams suggested it was an outrageous act of disrespect. "Finger pointing - that photo everybody was talking about today," he teased at the top of his January 26 broadcast. Williams demanded to know: "Who have you ever seen talking to the President like this, and what was this all about?"

A few minutes later, introducing a full report on the incident, Williams continued to sound indignant: "All of this takes us to the photo everybody's been talking about today. The governor of Arizona with her finger in the face of the President of the United States. You don't see that often or maybe ever, so what was this all about?"

Maybe Williams should have checked his archives pointing fingers at Governor Brewer.