Will the death of despotic dictator Kim Jong Il lead to less pandering and naive reporting on North Korea? Not if the past is any indicator. On September 19, 2005, CNN founder Ted Turner appeared on his own network to credulously insist that Kim "didn't look" evil. Turner proclaimed, "...He didn't look too much different than most other people." [MP3 audio here.]

After a bewildered Wolf Blitzer pointed out the harsh treatment of the North Korean people, Turner offered his own first-hand account: "Well, hey, listen. I saw a lot of people over there. They were thin and they were riding bicycles instead of driving in cars, but...I didn't see any brutality."

On October 19, 2006, (CyberAlert) Diane Sawyer contrasted North Korea's uniformity to the "unruly" United States. The ABC anchor, now the host of World News, traveled to the country and reported her findings.

After visiting a school children, in front of propaganda representatives, Sawyer recounted, "It is a world away from the unruly individualism of any American school....Ask them about their country, and they can't say enough."

Video of the moment shows Sawyer singing with the children. 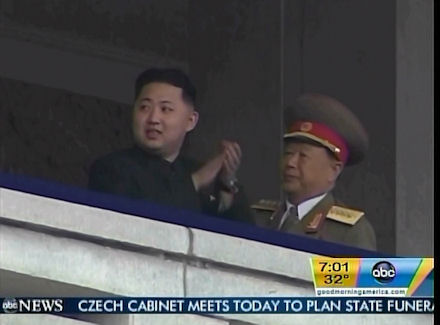 On October 11, 2010, Bob Woodruff informed Good Morning America viewers that Kim Jon Un, who is now reported to be taking his father's place, is "said to be a fan of basketball star Michael Jordan."

Of the country's parades, Woodruff lauded, "North Korea may well be the world's most isolated country, a state with few allies, but they do know how to put on a show."

A transcript of Ted Turner's exchange with Wolf Blitzer, which aired on the September 19, 2005 Situation Room, can be found below:

TED TURNER: 'I am absolutely convinced that the North Koreans are absolutely sincere....I looked them right in the eyes. And they looked like they meant the truth. You know, just because somebody's done something wrong in the past doesn't mean they can't do right in the future or the present. That happens all the, all the time.'


WOLF BLITZER: 'But this is one of the most despotic regimes and [North Korean dictator] Kim Jong-il is one of the worst men on Earth. Isn't that a fair assessment?'

TURNER: 'Well, I didn't get to meet him, but he didn't look — in the pictures that I've seen of him on CNN, he didn't look too much different than most other people.'

BLITZER: 'But look at the way he's treating his own people.'

Turner: 'Well, hey, listen. I saw a lot of people over there. They were thin and they were riding bicycles instead of driving in cars, but-'

Blitzer: 'A lot of those people are starving.'