On the eve of the Winter Olympics four years ago, Bryant Gumbel couldn't resist taking a racial shot at the Republican Party in a commentary at the end of his Real Sports magazine show on HBO. The former NBC and CBS morning news host concluded by telling viewers that as for the Winter Olympic games, "count me among those who don't like 'em and won't watch 'em."

He condescendingly suggested viewers "try not to laugh when someone says these are the world's greatest athletes, despite a paucity of blacks that makes the Winter Games look like a GOP convention."

Gumbel's remarks came on the February of 2006 edition of Real Sports, a monthly sports news magazine show which includes Bernard Goldberg amongst its correspondents. It first aired on Tuesday night, February 7, a few days before the Olympics opened in Torino, Italy.

Gumbel's commentary, at the end of the February 7, 2006 Real Sports on HBO, in full: 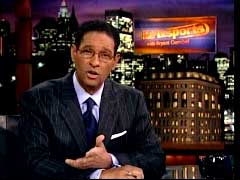 Finally tonight, the Winter Games. Count me among those who don't like 'em and won't watch 'em. In fact, I figure when Thomas Paine said "these are the times that try men's souls," he must have been talking about the start of another Winter Olympics. Because they're so trying, maybe over the next three weeks we should all try too.

Like try not to be incredulous when someone attempts to link these games to those of the ancient Greeks who never heard of skating or skiing. So try not to laugh when someone says these are the world's greatest athletes, despite a paucity of blacks that makes the Winter Games look like a GOP convention.

Try not to point out that something's not really a sport if a pseudo-athlete waits in what's called a "kiss and cry" area while some panel of subjective judges decides who won. And try to blot out all logic when announcers and sports writer pretend to care about the luge, the skeleton, the biathlon and all those other events they don't understand and totally ignore for all but three weeks every four years.

Face it, these Olympics are little more than a marketing plan to fill space and sell time during the dreary days of February. So if only to hasten the arrival of the day they're done and we can move on to March Madness, for God's sake, let the games begin.

Previewing a 1989 NBC prime-time special, 'The Racial Attitudes and Consciousness Exam (RACE),' Gumbel revealed how he presumes conservatives are racists: "This test is not going to tell you whether you're a racist or a liberal."

For dozens more videos of Gumbel's liberal advocacy and bashing of conservatives, as well as links to many more MRC articles about Gumbel's bias on NBC's Today and CBS's Early Show, check out the MRC's special Web section, "Bryant Gumbel: Liberal Activist Masquerading as Impartial Journalist."