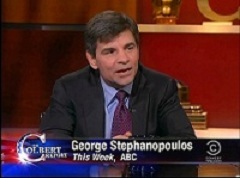 Appearing as a guest on Wednesday's The Colbert Report on Comedy Central, ABC's George Stephanopoulos responded to host Stephen Colbert's question of why he - as debate co-moderator last Saturday - asked GOP presidential candidate Mitt Romney about whether states have the constitutional power to ban contraceptives, as he argued that the question revolved around the "right to privacy."

He then suggested that a bet with co-moderator Diane Sawyer motivated him to be so persistent in asking Romney followup questions on the subject.

After Colbert asked what it felt like when Romney called it a "silly thing" for Stephanopoulos to ask such a hypothetical question, the ABC anchor responded: "At that moment, I am thinking,'I really want to win this bet.'"

After Colbert asked him what the bet was, he tied in Sawyer: "Diane Sawyer bet me I couldn't get Mitt Romney to say, 'Contraceptives are working just fine.' I won."

Below is the relevant portion of the Wednesday, January 11, The Colbert Report on Comedy Central:

STEPHEN COLBERT: So is it difficult to be a member of the press in front of a Republican audience? Okay, and I'll give you a specific example. You got into a section there where you were talking about contraception. You were asking questions about contraception.

COLBERT: Why was it so important? Why were you talking about contraception so much? Don't get me wrong, any guy sitting next to Diane Sawyer for that long at least thinks about it, but why did you make it part about the debate?

STEPHANOPOULOS: It was about the right the privacy. One of the candidates had said he believes that the states have the right to ban contraception. I was asking Mitt Romney the same question.

COLBERT: Okay, let's watch how that played out. This is just a little snippet of it.

STEPHANOPOULOS AT DEBATE: Governor Romney, do you believe that states have the right to ban contraception? Or is that trumped by a constitutional right to privacy?

MITT ROMNEY: The idea of you putting forward things that states might want to do that no state wants to do and asking me whether they could do it or not is kind of a silly thing, I think.

COLBERT: Okay, okay. He's basically saying you're a silly little child, and the audience is going, "We hate him, too!" What does it feel like at that moment?

STEPHANOPOULOS: At that moment, I am thinking, "I really want to win this bet."

COLBERT: What was the bet?

COLBERT: You got him to say, "Contraceptives are working just fine."

COLBERT: Even though, from the number of children he has, he has no idea how they work.

- Brad Wilmouth is a news analyst at the Media Research Center