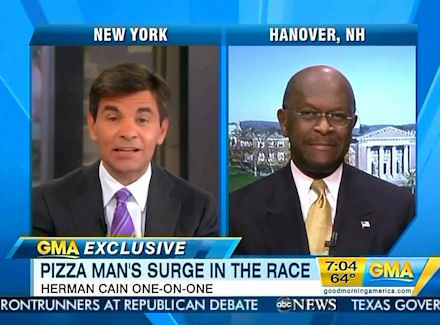 Surging Republican presidential candidate Herman Cain, identified as "pizza man" by an ABC graphic, finally appeared on Good Morning America, Wednesday, but was grilled by George Stephanopoulos on his 9-9-9 economic plan and a lack of experience.

Dismissing Cain's call for a nine percent flat tax for individuals and business and a nine percent sales tax, the former Democratic operative turned journalist attacked, "You're going to spend another nine percent every time they spend a dollar. That's going to be a huge hit to Americans who are hurting right now, isn't it?"

Stephanopoulos wouldn't accept Cain's explanation that the net economic impact would be positive for Americans. He lectured, "Sir, I know that's what you believe...But a lot of independent analysts have looked at this plan, as well." He added, "So, if you're wrong, will you revise the plan?"

At least GMA had Cain on. Though this was his first appearance for the 2012 cycle, the morning show has made a habit of previewing and reflecting on GOP debates with Democratic guests.

On Wednesday's show, Robin Roberts talked to Vice President Joe Biden about Iran, but, again, managed to continue the streak. Of Cain, she wondered, "George just talked to Herman Cain. Wanting to get your thoughts on his proposal, the 9-9-9 tax across the board."

A transcript of the October 12 segment, which aired at 7:04am EDT, follows:

STEPHANOPOULOS: And we are joined now by Herman Cain live in New Hampshire this morning. Good morning, Mr. Cain. Thanks for joining us this morning. And I guess you started to pay the price for success last night. Your 9-9-9 plan, scrap the tax code. Replace it with nine percent income tax, nine percent corporate tax, nine percent sales tax. Got hit by everyone on the stage last night And one of the most striking moments when they panned out to the crowd and asked them about the 9-9-9 tax. Not a single person raised their hand in support. And I wonder if that's because, you know, people look at the nine cent sales tax. You're going to spend another nine percent every time they spend a dollar. That's going to be a huge hit to Americans who are hurting right now, isn't it?

HERMAN CAIN: No, George. The reason people didn't raise their hands is because it's 9-9-9. Senator Santorum took each one of them and asked that question. I commend the audience for not raising their hands because they know you have to take the three together. Together, you broaden the tax base. And together, you lower the net/net taxes for everybody. And, so, I'm not surprised they didn't because he totally took it out of context. And Senator Santorum has also been the one who misrepresented it more than anybody else. And let me come back to a couple of others-

STEPHANOPOULOS: Sir, I know that's what you believe. You believe that everybody's going to get a tax break out of this. But a lot of independent analysts have looked at this plan, as well. And they say that this would be a huge tax cut for the wealthiest Americans, a real tax increase for poor and middle class Americans. And it's going to increase the deficit. Now, I know you dispute that. But that's what independent analysts say. So, if you are wrong, will you revise the plan?

STEPHANOPOULOS: Well, send them to us to them right now, but-

CAIN: Take, for example, George, please, 15.3% payroll tax. That goes to nine percent. That is a six percentage point deduction right there. Then, all they have to do is to pay the sales tax with that third nine. So, you have a got a six percentage-point pickup. And what people don't say is for the sales tax, you don't pay the sales tax on used goods. It levels the playing field. And, so, the mischaracterization is that they are using assumptions from the old tax code. And that simply does not work with the 9-9-9 plan.

STEPHANOPOULOS: Let me ask you about news about Iran that broke yesterday The Attorney General announcing they had broken up a plot backed by the Iranian government to assassinate the Saudi ambassador right here in the United States. ABC News has learned they also wanted to strike the Israeli embassy here. If the Attorney General came to the Oval Office to you with that information, how would President Cain respond?

CAIN: President Cain would say, "I would like to see all of the intelligence information. I would like to do a complete analysis with all the advisers so we can make an informed, responsible decision, as to what our next move should be." We need to do something. But, George, I'm not going to make a decision just based upon news reports. I would gather all of my advisers-

CAIN: -all of the intelligence sources. I know he's the Attorney General. But, George, I just don't listen to one person when I got to make a decision as critical as national security. He would provide one piece of input. But, I would want the Joint Chiefs of Staff involved in this. I would want our intelligence sources involved in this before I made a decision as to exactly what we needed to do. We need to do something.

STEPHANOPOULOS: You know, most Americans are just getting to know you right now after a remarkably successful career in business, the head of Godfather's Pizza. But you have no foreign policy experience. Why shouldn't that matter to voters?

CAIN: It shouldn't matter to voters, George, because having a foreign policy philosophy is more important than having foreign policy experience. For example, President Reagan's philosophy was, peace through strength. My foreign policy philosophy is peace through strength and clarity. We need to clarify who our friends are. Clarify who our enemies are. Stop giving money to our enemies. And then, let the rest of the world know who our friends are that we are going to stand by. This is one of the reasons that the Iranian situation popped up because it's not clear to a lot of people in the world under this administration, who we are going to stand with. And, so, they are doing saber rattling. And they're insulting the United States of America by trying to pull off something like they tried to pull off yesterday.

STEPHANOPOULOS: Let me ask you-

CAIN: A philosophy of peace through strnt and clarity is my philosophy.

STEPHANOPOULOS: Let me ask you about your health. You survived stage 4 liver cancer. You write about it extensively in your book. And I'm just wondering, what are doctors telling you about your condition right now? And would you be willing to release your medical records to reassure voters, any voters, who may be concerned about it?

CAIN: I'm willing to release my medical records. Two months ago, George, I went to my oncologist in Atlanta. Got a full-scale checkup, CAT scan, all of the various blood tests. And he put it in writing that after five years I am now totally, 100 percent cancer-free. And these are the doctor's words. I am a cancer miracle because I no longer have any traces of cancer. I'd be happy to release my records. Not a problem.