40 Years Since Chappaquiddick; Ted Kennedy 'Would Have Brought Comfort' to Mary Jo Kopechne 'In Her Old Age' 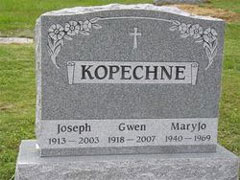 Earlier this week, ABC, CBS and NBC all noted the tenth anniversary of the death of John F. Kennedy, Jr. That Kennedy was an "icon" according to CBS's Harry Smith, and "the Prince of Camelot" to ABC's Chris Cuomo, a former cousin-in-law. Saturday marked the 40th anniversary of the death of Mary Jo Kopechne, killed July 18, 1969 after leaving a party with Senator Edward Kennedy. That night, Kennedy drove his car off a bridge, and left the scene with Kopechne still in the submerged vehicle; he did not call the police until the following morning.

Over the course of the past four decades, the media elite have touted Kennedy as a "liberal lion," spending far more time celebrating his ideological agenda than reminding people of his behavior that night in 1969. As my colleague Brent Baker noted in an op-ed back in 1999, the media have come to refer to Chappaquiddick as a "Kennedy tragedy," not a "Kopechne tragedy."

Perhaps the most egregious example of the liberal media planting a pro-Kennedy spin on Chappaquiddick came in a January 5, 2003 Boston Globe Magazine profile of Kennedy:

"If she had lived, Mary Jo Kopechne would be 62 years old. Through his tireless work as a legislator, Edward Kennedy would have brought comfort to her in her old age," wrote the Globe's Charles Pierce. The quote was recognized as the worst of the year at the MRC's DisHonors Awards in 2004.

If you're interested in how a writer could build up to such a quote, here's a lengthy excerpt of "Kennedy Unbound," Pierce's largely sympathetic profile of the senior senator from Massachusetts. Pierce salutes Kennedy's liberal accomplishments - blocking Robert Bork, for example, and expanding government regulation and the welfare state - and paints the Senator as as much a victim of his name as someone who has personally benefitted from it. (The entire piece appears to still be available online here.)

What if his name had been Edward Moore? It was a great line, a defining line. Against any other candidate, and especially in this age of endless political reiteration, it would've been the knockout line. It became a cheap trope for easy newspaper columns. On August 27, 1962, at the close of their first debate prior to the Democratic senatorial primary, Edward McCormack looked at Edward Kennedy and said, "If his name was Edward Moore, with his qualifications - with your qualifications, Teddy, your candidacy would be a joke."

It bit so deeply because of the essential truth of it - the truth that, among other things, would doom Eddie McCormack. Back then, with Jack in the White House and Bobby as attorney general, Teddy Kennedy's candidacy for the Senate was an act of raw dynastic power. An obscure family retainer named Benjamin Smith held the seat until Kennedy was old enough to be elected to it. Once he was, he was sworn in, not at the beginning of the term in January 1963 but almost immediately after his election in November 1962, which is how he got the jump on seniority over Daniel Inouye of Hawaii, who was elected the same year. None of this would have happened if his name were Edward Moore.

If his name were Edward Moore, Robert Bork might be on the Supreme Court today. Robert Dole might have been elected president of the United States. There might still be a draft. There would not have been the Civil Rights Act of 1991, which overturned seven Supreme Court decisions that Kennedy saw as rolling back the gains of the civil rights movement; the 1990 Americans With Disabilities Act, the most wide-ranging civil rights bill since the original ones in the 1960s; the Kennedy-Kassebaum Bill of 1996, which allows "portability" in health care coverage; or any one of the 35 other initiatives - large and small, on everything from Medicare to the minimum wage to immigration reform - that Kennedy, in opposition and in the minority, managed to cajole and finesse through the Senate between 1996 and 1998, masterfully defusing the Gingrich Revolution and maneuvering Dole into such complete political incoherence that Bill Clinton won reelection in a walk. None of this would have happened, if his name were Edward Moore.

His brothers might be alive. His life might have been easier, not having mattered much to anyone beyond its own boundaries. His first marriage might have survived, and, if it had not, Joan Kennedy's problems would have been her own, and not grist for the public gossips. It might not have mattered to anyone, the fistfight outside the Manhattan saloon, the foozling with waitresses in Washington restaurants, the image of him in his nightshirt, during Holy Week (Jesus God!), going out for a couple of pops with the younger set in Palm Beach and winding up testifying in the middle of a rape trial. His second marriage simply would have been a second marriage, and Vicki Kennedy would not have found herself dragooned into the role of The Good Fairy in yet another Kennedy epiphany narrative.

All of this would not have mattered, if his name were Edward Moore.

And what of the dead woman? On July 18, 1969, on the weekend that man first walked on the moon, a 28-year-old named Mary Jo Kopechne drowned in his automobile. Plutocrats' justice and an implausible (but effective) coverup ensued. And, ever since, she's always been there: during Watergate, when Barry Goldwater told Kennedy that even Richard Nixon didn't need lectures from him; in 1980, when his presidential campaign was shot down virtually at its launch; during the hearings into the confirmation of Clarence Thomas, when Kennedy's transgressions gagged him and made him the butt of all the jokes.

She's always there. Even if she doesn't fit in the narrative line, she is so much of the dark energy behind it. She denies to him forever the moral credibility that lay behind not merely all those rhetorical thunderclaps that came so easily in the New Frontier but also Robert Kennedy's anguished appeals to the country's better angels. He was forced from the rhetoric of moral outrage and into the incremental nitty-gritty of social justice. He learned to plod, because soaring made him look ridiculous. "It's really 3 yards and a cloud of dust with him," says his son Patrick.

And if his name were Edward Moore, he would have done time.

He has spent so much of his professional life draining that line of its meaning - the defining line, what would have been the knockout line if his name hadn't been Edward Moore Kennedy. He went to the Senate. He respected its traditions. He learned from its elders; his office today is in the building named after Richard Russell, with whom, according to Adam Clymer, Kennedy first attempted to break the ice by mentioning that Russell himself had entered the Senate when he was 36. Yes, Russell replied, but I'd been governor of Georgia by then, and Kennedy had had the good grace (and the good sense) to laugh.

"At that time, I think, there was less partisanship," Kennedy says. "There was less pettiness, and there were stronger personal relationships that stretched across party lines. Now we're so evenly divided that little things become big things. That demeans the institution and demeans our relationships, and, anyway, I think the public sees through that."

He developed a thick skin and learned to leave the heat of the argument on the Senate floor. That's how Kennedy learned to move past that day in 1991 when, during the debate over the nomination of Clarence Thomas to the Supreme Court, his good friend Orrin Hatch appeared to summon up the Great Unmentionable. "Anybody who believes that," said Hatch, "I know a bridge up in Massachusetts that I'll be happy to sell to them."

To this day, Hatch maintains that any connection between his wisecrack and Chappaquiddick was unintentional. "I was really mortified," says Hatch. "A lot of my supporters loved it, and when I said I hadn't meant it, it drained some of the charm, some of the glory, out of it."

Of Kennedy, he says: "He's able to take criticism and let it wash off him like water off a duck. He's been praised so much and criticized so much that he just ignores it."

For his part, Kennedy plays his cards so close to the vest that, to paraphrase Groucho Marx, if they were any closer, they'd be behind him. "It's basically a result of understanding how the institution is working and how things get done and to know that intuitively," Kennedy says. "The other stuff is just part of the deal. If you don't learn it, you might as well not bother serving in the Senate. I can go down and fight with Orrin on fetal transplantation and then testify with him on religious restoration when both were white-hot, and then we can go out later.

"Unless you work on that, there's very little left you can do. You can just be an advocate, and there's nothing wrong with that, or you can just be an accommodator, and you're not going to be a leader if you do that."

And that's the key. That's how you survive what he's survived. That's how you move forward, one step after another, even though your name is Edward Moore Kennedy. You work, always, as though your name were Edward Moore. If she had lived, Mary Jo Kopechne would be 62 years old. Through his tireless work as a legislator, Edward Kennedy would have brought comfort to her in her old age....

- Rich Noyes is Research Director at the Media Research Center.