Catching up with the Times' Tea Party beat reporter Kate Zernike at a post-election conference sponsored by the "Bipartisan Policy Center" in New Orleans on November 9: Zernike claimed she "very consciously tried to come up through the middle" in writing "Boiling Mad," her book on the Tea Party. Her defense of her own objectivity came nearly an hour into the discussion, aired by C-SPAN. 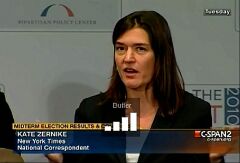 Kate Zernike: "What I worry about, honestly, is that what you're saying is correct, that there is, that people are so hungry for something that's on either side. I mean I've just written this book that very consciously tried to come up through the middle, and look at the Tea-that we, you know, the publishing house and I made a very conscious decision that there was a lot of polemic out there. I'm not a columnist so I couldn't write a polemic about the Tea Party. What I could do is be a reporter. And we made a decision that we felt that there were a lot of people out there who just didn't understand what the Tea Party was And so there was merit in saying, OK, we're going to take as objective as possible a look. And certainly, you know, conservatives think I'm not objective. Liberals think I'm too objective, whatever. You can't win on this score. But we were really gonna try and I think we produced a pretty good, balanced effect. And you know, I think, I worry that people are not that interested in it."

I disagreed in my September 17 review of "Boiling Mad," finding Zernike's book just as hostile toward the movement as her reporting was, noting that she reestablished her obsession with Tea Party racism on page 3 when reflecting on a Tea Party speaker "looking out at the sea of faces, almost all of them white." The book's index revealed that 23 pages worth of the book's slim content refer to "race and racism."

The most unfair section of the book involved the controversial claim that Obama-care protesters shouted racial slurs at John Lewis, black congressman and civil rights hero, during the heated debate before Congress voted on Obama-care.

Zernike claimed the Tea Party had "organized the rally," then took advantage of its loose structure to blame the entire group for any possible bad behavior by any individual in the vicinity, blame the Times never lays against loosely organized left-wing rallies where vandalism or violent acts are committed:

It was difficult, if not disingenuous, for the Tea Party groups to try to disown the behavior. They had organized the rally, and under their model of self-policing, they were responsible for the behavior of people who were there. And after saying for months that anybody could be a Tea Party leader, they could not suddenly dismiss as faux Tea Partiers those protesters who made them look bad.