William McGowan's 'Gray Lady Down': A Devastating Critique of the New York Times

"Gray Lady Down - What The Decline And Fall Of The New York Times Means For America" by William McGowan (from Encounter Books), is a carefully researched and devastatingly convincing critique of the Times losing its commitment to objective reporting.

It opens with the 2006 funeral of the paper's famed Executive Editor Abe Rosenthal, who retired from the paper in 1986. Though bad tempered and with a propensity to play newsroom favorites, Rosenthal is considered by McGowan the last lion of the paper's once-serious commitment to journalistic objectivity, "allergic to Woodstock" and other left-wing pieties, holding the line against the left-ward drift inherent to a Manhattan newspaper. A 1970s anecdote on a recurring nightmare by Rosenthal (waking one "Wednesday morning" with no New York Times) reminds us that concerns over the decline of newspaper reading among the young didn't start with the Internet. 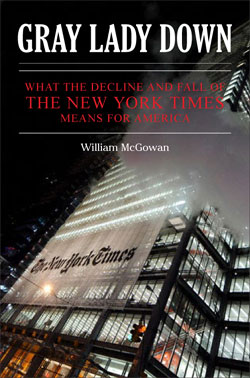 The scene is set with an extended character profile of family scion Arthur Sulzberger Jr. Groomed in a long apprenticeship for the publisher slot he would take over in 1992 (he would became chairman of the New York Times Co. in 1997), there were troubling signs he would not follow the hands-off approach of his publisher father, Arthur "Punch" Sulzberger. The son was an unimpressive journalist nonetheless determined to put his own stamp on the paper, particular in his zealous crusade for "diversity."

The last six chapters of "Gray Lady Down" are each devoted to the paper's coverage of a single broad hot-button cultural issue: Race, Immigration, Culture Wars, Gays, War on Terror, and War. The culture war is McGowan's primary focus, as it was in his previous book of Times criticism, "Coloring the News."

McGowan flags the "Southern guilt" of Howell Raines, the editorial page editor who became executive editor in 2001, felled by the favoritism he showed toward young black reporter Jayson Blair, who came to the Times via a minority-only internship program and proceeded to disgrace it. The most blunt parts of "Gray Lady Down" involve race: "The Times racial script...has come to resemble the journalist equivalent of reparations." McGowan delved into the paper's archives to show what the paper thought of Malcolm X in 1966 and came up with the striking headline "Black Power Is Black Death." Can you imagine that at the top of the editorial page tomorrow?

The Times also gives out lifetime free passes to "New York's premier racial agitator, Al Sharpton," who is constantly being rehabilitated by the paper no matter what incendiary things he has said. In a similar case of whitewashing, the paper left out the "God damn America" sermon cursing of Obama's hometown preacher Jeremiah Wright. When Obama was finally forced by political pressure to renounce Wright, the Times hastened to applaud the unmemorable speech as Lincolnesque. McGowan concludes "the only diversity the paper truly embraces is that of race and ethnicity."

In a brief foray into partisan politics, McGowan cites a fine media watchdog site called Times Watch, which analyzed a month of stories the Times did on Barack Obama and Republican John McCain during a slice of the 2008 campaign and found that positive portrayals for Obama outnumbering negative ones by a 3:1 ratio. When it came to McCain, that positive/negative ratio was reversed.

"Gray Lady Down" also deals at length with what I consider the most disturbing coverage the paper has put out since I began monitoring the paper: The Duke lacrosse "rape" hoax, a sordid interlude in which the newspaper's columnists and reporters often discarded the presumption of innocence while stacking the deck against three white lacrosse players arrested for the rape of a black stripper. The paper defended its coverage even as the case imploded and it was revealed that the players were victims of lies by the stripper and misconduct by the local prosecutor.

The paper's book review practices are an understandably sore subject for McGowan. He held out false hope on arrival of editor Sam Tanenhaus, author of a well-respected biography of conservative hero Whittaker Chambers. But conservative books (including McGowan's) continue to be shunned in reviews.

Even on the war on terror, a vital local issue after 9-11, the supposedly unserious tabloid New York Post had more complete and comprehensive coverage of local terror plots then did the "paper of record." McGowanwent after the Times for scuttling two successful anti-terror programs and laid out "The Times' alienation from military culture" in the "War" chapter. He flagged Iraq correspondent Paul von Zielbauer's shoddy coverage of the Haditha "massacre," which McGowan saw as part of the paper's quest to uncover "a new My Lai in Iraq." The case against the Marines accused of the "massacre" failed, with the one Marine who went to trial acquitted.

Nor does he forget reporter James Dao's infamous truncating of a letter in a November 2005 profile of Marine Corporal Jeffrey Starr in which he predicted his own death, reducing Starr to a hapless victim of the war when Starr himself saw nobility and dignity in sacrifice.

"Gray Lady Down" reminds us of the ad the Times ran (at a healthy discount) for the left-wing anti-war group MoveOn.org, notoriously headlined "General Petraeus or General Betray Us?" That ad appeared in September 2007, just as the troop surge in Iraq began to bear fruit under the leadership of U.S. Army General David Petraeus.

McGowan concluded by circling back to the departure of Abe Rosenthal, the symbol of the old-fashioned journalism he believes was exemplified under Rosenthal's regime. He's not a boycotter or even an enemy of the Times; most of his criticism is of the sorrowful, not angry, variety. He just longs for "a much better version of the Times than is being produced by the current regime." After reading his book, all but the most politically in denial Americans would surely agree.