Who's in the Times' Corner on Its McCain Hit Piece? So Far, No One

The fallout continues from yesterday's hit pieceon John McCain, and the paper itselfdoesn't seemeager toput up a fight, while even the network news broadcasts questioned the paper's journalistic standards. 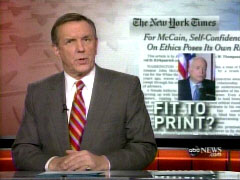 Yesterday's inflammatory Times story on John McCain, which used anonymous sources to forward nine-year-old allegations from his first presidential run suggesting an improper relationship by John McCain with a female telecommunications lobbyist, received prominent front-page placement. Yet today's follow-upon McCain's press conference (both McCain and the telecom lobbyist Vicki Iseman deny a romantic relationship, and not even the Times makes a direct accusation of infidelity) was relegated to page 20 - Elisabeth Bumiller's "McCain Disputes That Aides Warned Him About Ties to Lobbyist."

Since the NYT gave such prominent Page One play to the original story, shouldn't it devote at least some front-page real estate to the repercussions and denial? Instead, the paper chooses to reefer the story.

Senator John McCain on Thursday disputed an account in The New York Times that top advisers confronted him during his first presidential run with concerns about his ties to a female lobbyist.

Later in the day, one of Mr. McCain's senior advisers directed strong criticism at The Times in what appeared to be a deliberate campaign strategy to wage a war with the newspaper. Mr. McCain is deeply distrusted by conservatives on several issues, not least because of his rapport with the news media, but he could find common ground with them in attacking a newspaper that many conservatives revile as a left-wing publication.

"It was something that you would see in The National Enquirer, not in The New York Times," said Steve Schmidt, a former counselor to Vice President Dick Cheney who is now a top campaign adviser to Mr. McCain.

Mr. Schmidt, in lengthy comments to reporters traveling on Mr. McCain's campaign plane, said The Times had rushed the article into print so it could beat The New Republic in the publication of an article about the story behind The Times's investigation of Mr. McCain. The Times article was first published on its Web site on Wednesday night; The New Republic posted its account of what it described as staff conflict over the Times article, on its Web site on Thursday afternoon.

Here's a round up of reactions:

Conservative media critic Brent Bozell took a shot on the Fox News Channel, by saying that The New York Times is giving the National Enquirer a bad name.

Some non-ideological critics focused on the failure to prove the affair, or the favoritism.

Keller says that misses the point.

"I think the story that emerged is actually bigger, and more important and maybe more subtle," he says. "There's not a big market for subtle these days but I think it's an important story."

Keller says people should judge his paper's reporting as journalism, not as part of any political campaign.

All the networks led with the story, but did feature criticism. MRC's Brent Baker summarized:

All three broadcast network evening newscasts led Thursday night with the New York Times story alleging an improper relationship by John McCain with a female lobbyist, but questions about the journalistic standards of the newspaper were given as much consideration as the allegations against McCain. All three ran a soundbite from Rush Limbaugh denouncing the paper while ABC and CBS featured establishment media observers who castigated the Times for basing a story on the feelings of unnamed sources: Ken Auletta on ABC and Tom Rosenstiel on CBS.

Ben Smith at The Politico rounded up the surprisingly critical response of the left-wing blogosphere:

Greg Sargent, at TPM's Horse's Mouth, writes that the Times doesn't "have the goods" and "shouldn't have gone there." Matthew Yglesias accuses the Times of "shameful" dealings in "innuendo," though he's interested in the sex-free, lobbying aspects of the story. Big Tent Democrat at TalkLeft calls it "troubling" and bad for Democrats . Kevin Drum writes of the Times that "there's no way that they 'nailed' anything."

At the Washington Post, media reporter Howard Kurtz talked to Times Executive Editor Bill Keller, who accused McCain's advisers of trying to "rally the base" against the Times. (And it's working, as even conservative critics of McCain have united behind him and against the Times' liberal bias.)

Bill Keller, the paper's executive editor, dismissed a cascade of attacks yesterday accusing the Times of politically motivated sensationalism. "They're trying to change the subject to us," Keller said in an interview. McCain's advisers, he said, are attempting "to use the New York Times as an opportunity to rally the base."

Critics were hurling conflicting charges yesterday. Some said the story was unsubstantiated and should not have been published. Others complained that the Times should have run it sooner, so that voters in the early Republican primaries could have weighed the allegations. Those critics accused Keller of sitting on the story until McCain had time to secure the Republican nomination.

Keller denied deliberately delaying the story, saying that would have put him in the position of withholding important information from voters. "You can't let the electoral calendar govern your judgment about when to publish stories," he said

Jonathan Martin and Mike Allen have a lead story up at The Politico onhow the McCain camp is actually spinning the story as a positive:

How vindicated? McCain is actually raising money off the Times' story. Here's an excerpt from a letter the campaign sent to supporters, selling McCain as a conservative Republican being attacked by the Times and pointing out the Times' embarrassment over a deep discount granted to the far-left group MoveOn.org smearing General Petraeus:

Well, here we go. We could expect attacks were coming; as soon as John McCain appeared to be locking up the Republican nomination, the liberal establishment and their allies at the New York Times have gone on the attack. Today's front-page New York Times story is particularly disgusting - an unsourced hit-and-run smear campaign designed to distract from the issues at stake in this election. With John McCain leading a number of general-election polls against Barack Obama and Hillary Clinton, the New York Times knew the time to attack was now, and they did. We will not allow their scurrilous attack against a great American hero to stand.

The New York Times - the newspaper that gave MoveOn.org a sweetheart deal to run advertisements attacking General Petraeus - has shown once again that it cannot exercise good journalistic judgment when it comes to dealing with a conservative Republican. We better get ready for more of the Democrats' attacks over the coming months as the Democrats pick their nominee, MoveOn.org starts spending their unlimited soft money, and the liberal media tosses standards aside in an attempt to stop our momentum. We need your help to counteract the liberal establishment and fight back against the New York Times by making an immediate contribution today.