When all you have is a hammer, everything looks like a nail.

Over the last decade, Times columnist Tom Friedman has written on the costs of the Iraq war, the federal deficit, the threat of global warming, and the uprisings in the Arab world. In Friedman's view, all these problems have one simple solution: A $1-a-gallon hike in the gas tax. 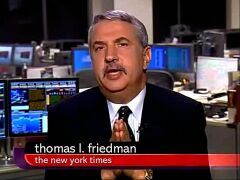 In his Wednesday column, "If Not Now, When?" Friedman pushed the tax as having some tenuous connection to pushing democratic values in the Middle East:

No one is rooting harder for the democracy movements in the Arab world to succeed than I am. But even if things go well, this will be a long and rocky road. The smart thing for us to do right now is to impose a $1-a-gallon gasoline tax, to be phased in at 5 cents a month beginning in 2012, with all the money going to pay down the deficit. Legislating a higher energy price today that takes effect in the future, notes the Princeton economist Alan Blinder, would trigger a shift in buying and investment well before the tax kicks in. With one little gasoline tax, we can make ourselves more economically and strategically secure, help sell more Chevy Volts and free ourselves to openly push for democratic values in the Middle East without worrying anymore that it will harm our oil interests. Yes, it will mean higher gas prices, but prices are going up anyway, folks. Let's capture some it for ourselves.

The gas tax can also pay down the national deficit. From Friedman's September 20, 2009 column, "Real Men Tax Gas," which tried to portray the tax as the macho thing to do:

According to the energy economist Phil Verleger, a $1 tax on gasoline and diesel fuel would raise about $140 billion a year. If I had that money, I'd devote 45 cents of each dollar to pay down the deficit and satisfy the debt hawks, 45 cents to pay for new health care and 10 cents to cushion the burden of such a tax on the poor and on those who need to drive long distances.

Yes, it is helpful that Mr. Bush expressed a desire last week to work with other nations to limit greenhouse gases. His bully pulpit matters. But no one will - or should - take him seriously unless his government first leads by example. What would that look like? It has to start with a clear, long-term price signal. That is, a carbon tax or gasoline tax - or a cap and trade system with a binding national ceiling on carbon dioxide emissions - which would set a price for dumping carbon into the atmosphere or driving a gas-guzzling car.

My gut told me this was the case, but it's great to see it confirmed by the latest New York Times/CBS News poll: Americans not only know that our oil addiction is really bad for us, but they would be willing to accept a gasoline tax if some leader would just frame the stakes for the country the right way....The only real solution is raising our gasoline tax, which is a paltry 18.4 cents a gallon and has not been increased since 1993.

It could even rebuild Iraq. From Friedman's October 5, 2003 column "The Real Patriot Act."

There's all sorts of talk now about how to finance the $87 billion price tag for the reconstruction of Iraq. I say, let's make OPEC pay - indirectly. Let's have a $1 a gallon gasoline tax and call it the ''Patriot Tax.'' We could use the revenue it would raise - about $110 billion a year - to finance the entire reconstruction of Iraq, with plenty left for other good works.