Times Watch's new study "Supremely Slanted - How the New York Times Pounds Conservatives and Coddles Liberals When Nominated for the Supreme Court," was discussed by Fox News contributor Liz Trotta on "America's News Headquarters" just before the one o'clock hour on Saturday afternoon. 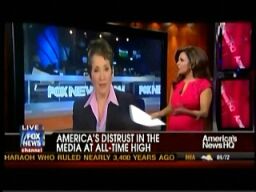 After some discussion of a Gallup poll showing Americans have little trust in the mainstream media, host Uma Pemmaraju shifted the discussion to the new Supreme Court study from Times Watch. (Watch the video here.)

Fox News Host Uma Pemmaraju: "But there's another poll, out right now that looks at media behavior as well and specifically how the media handles the Supreme Court nominees, how are those related?"Liz Trotta: "Exactly. Well, they're related in this way, just to go back to the Gallup [poll] for one second. Forty-eight percent of the people who were polled said that they were, that the press was too liberal. Well, the Media Research Center has done a study on the New York Times coverage of Supreme Court nominees and this is where you can see that this has to be an example of why people don't trust the media. What they did, is they looked at seven Supreme Court nominees from 1991 to 2010, that's four Democrats and three Republicans. And they wanted to see how the New York Times treated them. Well, I can just hear you thinking out there, well, you could have told, you could certainly guess, because you read the paper or you've heard, and you know it's a liberal newspaper. But the figures are interesting, because you can see that they have one figure tells us that they're 10-to-1 more likely, that is the Times, to describe the Republicans as conservatives as they would describe the Democrats as liberal. And the intensity of the coverage, of the coverage and the glorification of liberal candidates really amounts to a certified chapter in advanced liberal media bias."